A ride in a Sinclair C5 two years ago brought back teenage memories and sparked the start of an unusual collection for Ramsgate’s Leigh Thompson.

The 45-year-old was bitten by the Sinclair bug during the ride and bought his first C5 that same evening.

He now has four full C5s, named Tarquin, Chas Gordon and Dave, and a fifth vehicle which is just the shell – named Michelle.

The enthusiast also has an electric Sinclair bike – called a Zike – and multiple Sinclair computers.

Leigh said: “I first went on one when I was 14 or 15 and at Camber Sands. I could only pedal it and ended up with a really bad pain at the bottom of my spine. Then a couple of years ago I had a go in one and that pain came back! That night I went and bought one – I collected it from Essex and called it Joey – and the collection has just grown. 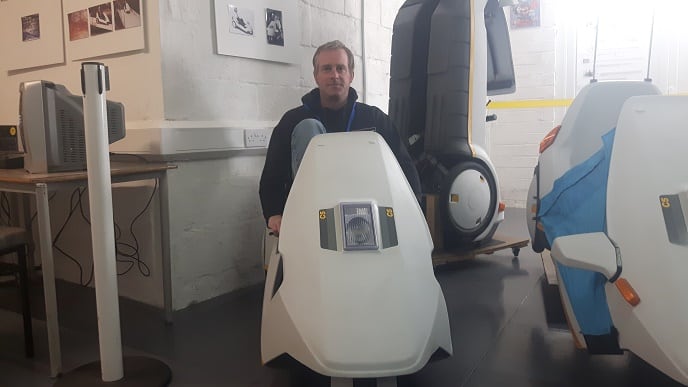 Leigh, who volunteers at the Ramsgate Micro Museum in Church Hill, is currently exhibiting three of the C5s, the Zike and a collection of Sinclair computers.

He said: “I’d been talking to Carol and Mike (Micro Museum owners) about doing an exhibition for a long time and they finally said yes!

“There is a lots of interest in the C5s now they are so rare. People like to ask about them and find out if they are originals or reproductions.”

Sir Clive Sinclair is an English entrepreneur and inventor, most commonly known for his work in consumer electronics in the late 1970s and early 1980s.

Sinclair developed the C5 as an electrically powered tricycle with a polypropylene body and a chassis designed by Lotus Cars.

It was launched in January 1985 but received poor reviews.

The vehicle’s limitations – a short range, a maximum speed of only 15 miles per hour, a battery that ran down quickly and a lack of weatherproofing – made it impractical for most people’s needs.

But the C5 then became a cult item for collectors. Thousands of unsold C5s were bought by investors and sold for inflated prices. Enthusiasts have established owners’ clubs and some have modified their vehicles with adaptions including monster wheels, jet engines, and high-powered electric motors.

Leigh, who was also a programmes writer for Sinclair User magazine, will be on hand to answer questions about the collection and Sir Clive this coming weekend.

The Electric Sinclair display started last weekend and is on again this weekend, May 18-19, at the museum between 12.30pm- 4pm