Plastic nasal spray bottles that have washed up in their thousands along the southern coast have now reached Thanet.

Since January the Otrivin bottles have been found in large numbers on beaches including in Plymouth, Suffolk and further across the Channel in France and the Netherlands.

A batch has now washed up at the corner of Pegwell Bay towards Sandwich Bay.

Tony Ovenden, of the Thanet and Sandwich Coastal Finds facebook group, picked up around a dozen bottles at the site yesterday (April 16) but said there were more that he had to leave behind.

It is thought the bottles may have fallen from a ship many years ago but the container has now broken open, according to research by the South Hams Gazette 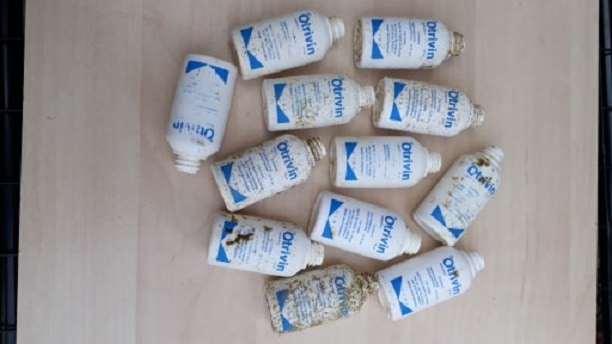 Tony, who is also a Thanet coastal warden, said: “The bottles seems to have worked themselves up the English Channel with the recent winds pusjhing them to the corner of Pegwell Bay and the Thanet coast.

“It really does highlight how far plastic can travel and how many years it pollutes for, there are still pieces of plastic butter dish tops from Sealink Ferries turning u[p from the 1980s.

“People find bits of plastic all the time but when you find a number of items that are all the same and in the same place it catches the imagination.”

South Hams Gazette spoke to the University of Plymouth who said: “Although the size of the bottles don’t pose an immediate risk to smaller marine animals such as fish and birds, the real damage will be caused once they break down into tiny microplastics from exposure to the sun, oxygen and warmer temperatures.”

Otrivin is sold by pharmaceutical company GlaxoSmithKline but the firm says the bottles pre-date GSK’s ownership of the brand.

A GSK spokesperson said:“The Otrivin bottles that have been found washed up on the UK coastline were manufactured by a previous owner many years prior to GSK purchasing the brand in 2014.  We cannot therefore shed any light on how they came to be there.

“As part of our commitment to our consumers, we have been conducting a comprehensive assessment of how we use plastics in the packaging of our products and will continue to seek further opportunities to innovate in an effort to reduce our plastic footprint.”

Tony said indicators suggest more bottles will wash up along the Thanet coast. If a clean up is required it may fall to Thanet council if the original ‘polluter’ cannot be identified.

The bottles are not the only influx of plastic that hits our shores. For several years, almost every winter, the sea brings ashore Perutz slide holders to beaches in Margate , Ramsgate and Broadstairs.

On the Thanet and Sandwich Coastal Finds facebook page the holders have a cult following among local beachcombers with a trend of posting slides holders with an image of where they were found within the holder. Margate is the hotspot for such finds.