There were seven changes to the Thanet team that lost so heavily in the previous game. Adam Gaddes was out having broken both thumbs, he was replaced by George Orton, returning after injury, he partnered Kieran Wright in his second start of the season in the second row. Jimmy Green and Neil Wakefield were back in the front row. Charlie Knight, Stuart Plumridge and Ryan Copp returned to the backline.

Colfes kicked off up the slope on a chilly afternoon and scored an unusual early try after Wanderers hooked cleanly on their own scrum and the scrum was steady but the ball rebounded into Colfes side leaving the home defence out of position and giving the speedy opposition winger a clear path to the line. The try was unconverted from wide left. Dan Hill replied with a penalty for Wanderers. After half an hour the visitors scored their second try which again went unconverted but still opened up a 10-3 lead.

Luke Tolley had worked hard at tight-head but was forced to retire after a knock. Wanderers were struggling to find their usual fluency with confusion at a line-out leading to an opposition free kick and an infringement for crossing halting a promising move. With a minute left before the break Wanderers clicked into top gear and Knight, Plumridge and Sam Rolfe were prominent in a break that tested the visiting defence before they gratefully kicked the ball out to close the half. 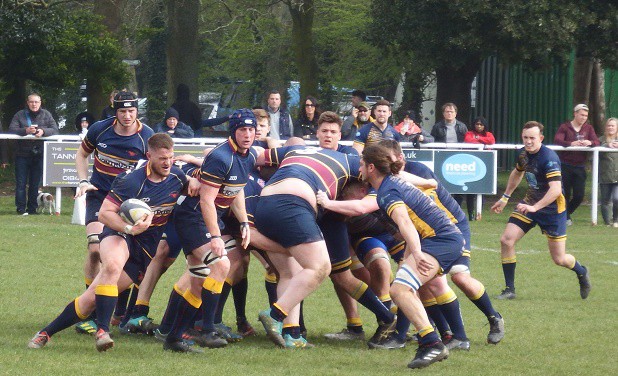 Wanderers were very quickly out the blocks for the second half and drew a penalty that Hill converted to make the score 10-6. Nick Herbert was constantly tested the visiting midfield defence and all of the home backs looked threatening with ball in hand. Six minutes into the half they were rewarded. The forwards battled away wide to their right but couldn’t break through so the ball was hurried left. Plumridge made many metres before handing on to Knight who was all bristling determination before touching down for an 11-10 lead.

Copp powered through several tackles and was stopped only by a good tackle and the right winger was perhaps unlucky then to be penalised for holding on. Moments later on the other side of the pitch Dan Hill was threading his way along the touchline before being bundled into touch by a no arms tackle that earned Colfes scrum half ten minutes in the sin bin. Thanet’s front row of Green, Wakefield and Clement were outstanding in an increasingly dominant pack. Hill knocked over his third penalty of the afternoon to stretch Thanet’s lead to 14-10. Wright has had limited availability this season due to work commitments, he now retired after a good shift to be replaced by Kris Finneran. Plumridge followed shortly afterwards after an inspirational hour that showed how valuable he is to the side. He was replaced by Thanet’s Mr Reliable, Peter Macaulay. 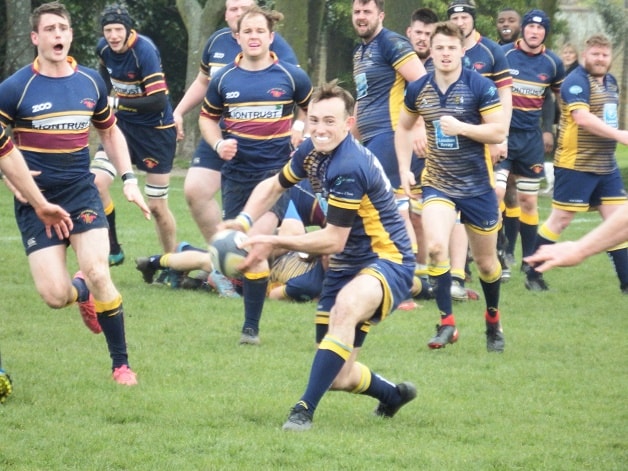 Wanderers had been warming up their driving maul and now it went into overdrive. Gaining momentum from thirty metres out it reached the line at speed and to the forwards dismay it was arch poacher scrum half Tom Walton who claimed the touch down for his eleventh try of the season. No conversion but Wanderers were now two scores clear at 19-10. Time for Colfes to raise their game and for the next ten minutes Thanet’s defence was under severe pressure. Wave after wave of attackers were repulsed. The big runners were downed.

Brett Scott led by fine example as he tackled like a demon. Sam Taylor and Andy Letts were superb, and the defensive line would not yield. Finally the siege was lifted. Hill streaked away in an amazing run and Finneran still had much to do before crossing for Wanderers third try. Hill’s conversion made it 26-10. Colfes continued to battle. Scott was back on his feet in seconds to complete a terrific pair of tackles. Colfes finally subsided conceding an extra ten metres for a penalty as frustration at the looming defeat surfaced. Two minutes later the final whistle sounded, leaving Thanet’s players and supporters to reflect on a remarkable second half turn-around. The support had grown during the second half as it was swelled by late comers from lunch. That intangible sixteenth man was again on Wanderers side as the team made it four wins from four matches on Paul Keohane lunch dates. 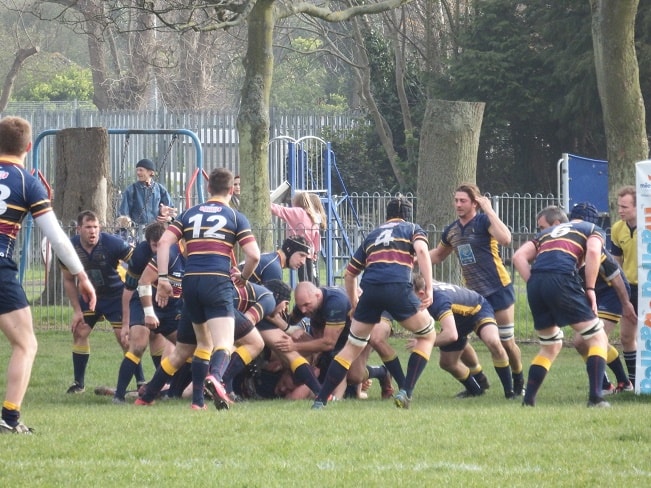 Wanderers lost the opening match of this season away at Colfes by 59-17. None of the pack and only three of the backs that started that match were in Thanet’s squad today. After losing their first six league matches Wanderers have rallied to win nine of the next sixteen playing an attractive brand of rugby founded on the  superb defence that was evident today. Head Coach Mike Pond has thoroughly enjoyed his first season as Head Coach playing an exciting style of rugby and will aim to improve the team’s away record next season. Despite the win Wanderers slipped one place to finish in a creditable eighth place in this competitive league.

There were any numbers of candidates for Thanet’s man of the match but the Coaches’ choice was Dan Hill who was excellent in all aspects of his kicking, ran elusively and was great in defence.

The second XV have a re-arranged league fixture against Sevenoaks due to be played at home on Saturday, April 13 (kick off 3pm). On Sunday the Vets have their Spitfire Gold Veterans Cup Final against Westcombe Park at Maidstone RFC Kick off 4pm. If you would like to support, a coach will leave the club (meet at 1.15pm) Contact Elliott to check availability on 07786 522375.