A new project is set to celebrate the Isle of Thanet’s lost printing industry, after Kent arts organisation Appletye received a grant from the National Lottery Heritage Fund.

The £26,600 grant for the Print Works project will enable Appletye to catalogue and digitise archives from Margate firms The Thanet Press and Martell Press, and record the stories of the people who worked there.

Made possible with money raised by National Lottery players, the project focuses not just on the work of the industry, but also the clubs, social societies and life of the families involved in the firms.

Founded more than 100 years ago as part of the Bobby & Co group, The Thanet Press was taken over by Eyre & Spottiswoode when their London factory was destroyed in the Second World War. It became a nationally-important printer with clients including the Royal Family, national galleries and museums and Government. 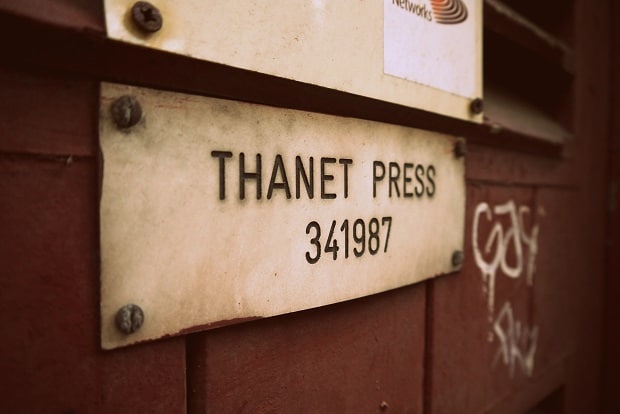 The Thanet Press site is currently being redeveloped, as Tracey Emin’s new studio, an artist print studio, and gallery space.

Martell Press, founded by brothers Charles and Henry, was a commercial printer active during the heyday of the Isle’s tourism industry and serving many tourism-related businesses. In the later years of the business, Martell Press had a site based in Northdown Road, Cliftonville. That building is now Costa coffee shop. It also had sites at Hopes Lane, Ramsgate, and previously in Fitzroy Avenue as well as briefly at Manston.

For Print Works, young people from Margate, Broadstairs and Ramsgate will explore the archive and collect stories from people who worked at The Thanet Press and Martell Press. The Special Collections team at the Templeman Library, University of Kent will train the young people. They will also have opportunities to see how the printing industry worked, producing prints on small presses.

At the end of the project, the young people will hold a celebratory event, and the story they uncover will be told in an exhibition at the Templeman Library, on the university’s Canterbury campus.

“The archives from our two printers tell a story of an Isle of Thanet industry that was highly skilled, and nationally known,” says project manager Dawn Cole, “and it’s important that we capture that now, as the old sites are being redeveloped.”

Print Works will be launched in May.

For further information, visit www.appletye.org or the Facebook page, www.facebook.com/Appletye.org

Report and photos by Dan Thompson