Animal rights campaigners will be protesting in Ramsgate once more on Friday (April 12) as three lorries – two carrying sheep and one calves – for live export are expected at Ramsgate Port.

The Joline is due to sail from the port with the live export shipments at 8am.

Lorries are due to arrive from 7am and protesters against the trade will be at the Nethercourt roundabout from 6.30am.

Sheep and, more recently calves are coming through Ramsgate after P&O Ferries stopped taking the shipments.

Thanet council – at the time with a Labour ruling group -banned exports from Ramsgate after 47 sheep died at the port in September 2012 but they were forced to make a U-turn by the High Court.

Campaigners against live exports say travel times for the animals are being breached. Last month Kent Action Against Live Exports (Kaale) said sheep being transported through Ramsgate to Holland travelled for 20 hours non-stop.

However one commentator has insisted that the animals were resting onboard the vehicle whilst on the ferry and that they were provided with water and feed. 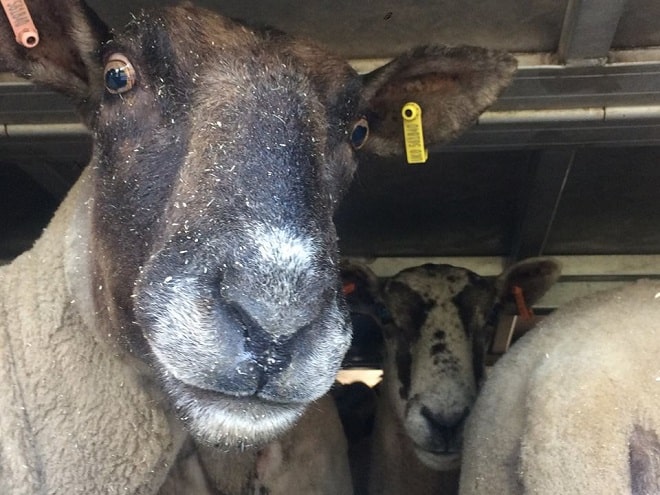 Under EU rules, lorries carrying sheep must stop for at least an hour after 14 hours. In January some 260 calves being transported from Ramsgate to Spain, via Calais, travelled in excess of 14 hours non-stop due to problems with the vessel Joline.

A KAALE spokesperson said: “KAALE’s campaign is to end the cruel practice of exporting live animals for slaughter or further fattening. Sheep are often transported from the north of England down to Ramsgate and calves as young as two weeks of age are carried all the way from Scotland.

“They then board the Joline, a Russian built tank carrying vessel which is not fit for purpose with the lorries out on open deck for the slow crossing from Ramsgate to Calais. The animals are exposed to the elements, with the heat of the summer sun beating down on them or the chilly winds of winter.

“Many are sick or lame but are still forced to endure the arduous journey. At the end of it, they face a terrible fate: for the sheep, the terrible and prolonged agony of ritual slaughter and for the tiny unweaned bull calves, a short life in a Spanish veal pen.

“The number of animals transported has decreased considerably since the 1990s but a single lorry would be one too many.  Michael Gove is considering a ban.

“Now is the time for the people of Kent to speak out against this trade.”

A spokesman from the Department for Environment, Food and Rural Affairs (Defra) said if any welfare regulations are breached, appropriate action is taken.

“Animals deserve respect and care at all stages of their lives, which is why we have consistently said that we will control the export of live farm animals for slaughter once we leave the European Union,” he said.