A fundraiser launched in aid of Ramsgate’s Joe Shaw, who is in recovery from brain injuries following a brutal attack last year, has reached more than £6,500.

The page was set up by Broadstairs teaching assistant and carer Vicki Holden.

Vicki worked at the rehab centre, where she met Joe and was inspired to take on a 100 mile run to raise cash to help get Joe home.

Joe was seriously assaulted on March 17 last year in Ramsgate town centre. He was initially taken to a local hospital but was then transferred to Kings College Hospital in London,  At first Joe was heavily sedated and in the critical care unit in a coma, breathing through a ventilator.

Joe is currently staying at a rehabilitation centre in Herne Bay. The severity of his injuries have left him unable to walk, speak or complete many basic tasks for himself. Joe currently communicates by spelling words out on a letter board with his right index finger but is determined to speak again. 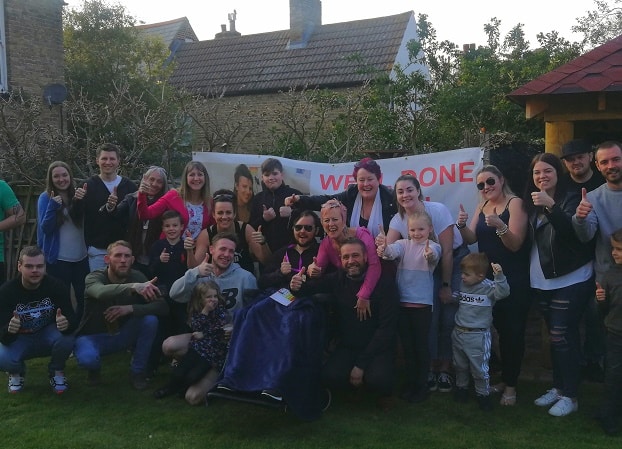 He is due to undergo  an operation in mid-April to have his skull re-formed. The fundraiser is to help pay for adaptions to Joe’s home.

Amongst the adaptions and equipment needed are wheelchair access leading up to the house, widened doorways  and a room for Joe would need to be built to suit his needs. There also needs to be a wet room, a motorised wheelchair, nutrition and physio therapy support.

His mum Nancy said: “The financial impact has been immense, both Joe and ourselves (parents) are self-employed which has meant one of us have had to give up work to be by Joe’s side.

“Anyone within the disability world will tell you how daunting and frightfully expensive it is. You have to fight for everything and frequently you don’t get what is needed and end up paying ridiculous prices for things yourself. One of Joe’s therapies cost £400 for six sessions and sadly the money has run out so now we need to look at how we are going to fund this.”

Vicky completed her run on March 30 and was met at the finish line by Joe and Nancy.

Vicky said: “The run has been harder than I thought it would be but I don’t regret taking the challenge at all, after all it was for a great cause.

“Seeing Joe;s face at the end with a beaming smile made me feel very emotional. Once I had run through the ribbon I went over to Joe and put my medal around his neck because if anyone deserves the medal it is Joe for all that he and his family has been through in the last year. His reaction was priceless, it really was an amazing day!

“My plans now will be to continue fundraising for Joe until we get him home. Already the target has been met and is now at £6,500 which is incredible! I’m hoping that the next fundraising event iI am doing in May will take the total to £10,000. I would like to thank everyone who has donated so far, their support will never be forgotten.”

Stacey Collins, manager of the Bluewave Hydropool in Margate has put together a charity 100 hour swim in aid of Joe which will be held on June 1. People can pay £5 to do 30 minutes of swimming for Joe’s fund.

On May 17 Vicky will be holding a fundraising event in Birchington where there will be a band, raffle and charity waxing. She will also be climbing Snowdon in July for Joe.

Vicky said: “I have formed a lovely close relationship with Joe’s family now and have made a friend for life in Joe. I feel very grateful that they have let me help them. The minute I stop supporting him is the minute he is home and in a comfortable position to lead a normal independent life.”

Donate to the justgiving fund by clicking here 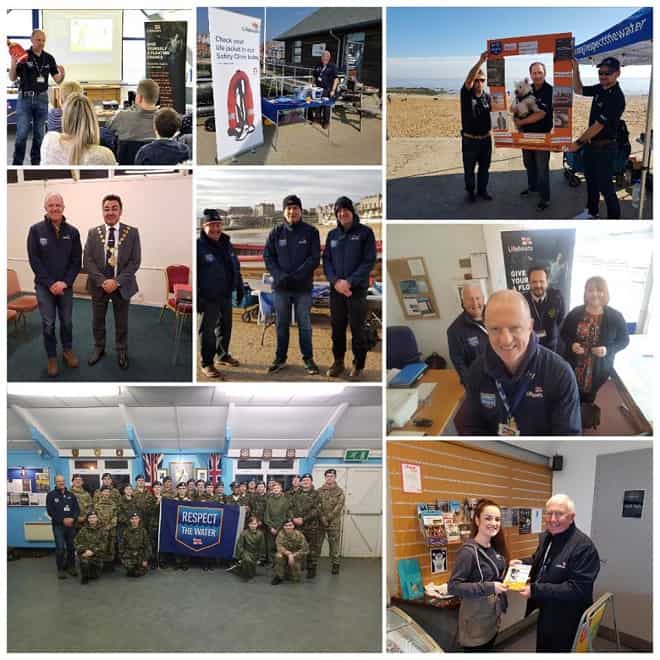 Our team have been busy since January with their water safety and drowning prevention activity. The photo collage demonstrates the wide range of innovative preventative activity which we are engaged in. Our activity so far includes attending the fabulous Broadstairs Town TeamBeach Clean, lifejacket clinics at RTYC Ramsgate , Coastal Dog Safety Stand at Dumpton Gap, liaising with Broadstairs & St. Peter’s Town Council Mayor and NCI Herne Bay ; and delivering bespoke safety presentations to 438 Thanet Squadron Air Training Corps RAF Air cadetsamongst others. Stay tuned for more of this water safety and drowning prevention activity over the forthcoming season.

Plant Sale on Saturday, April 13 from 10am until noon, with coffee, cake, and Bric-a-Brac  stalls.

We held our AGM meeting on Thursday, April 4 with a good attendance where the Secretary was re-elected unanimously again unopposed.  There was a long list of apologies mainly due to ill-health and we wish them all well in their recovery. A full and detailed financial report was given showing us in a good position which was approved by the meeting. Our annual subs; remain at £5 and must be paid by our July meeting.

A report was given on our New Year dinner with all requesting we return again in 2020.  Reports were given on the Channel Dash service held at Ramsgate.  We will be attending the Armed Forces Day parade at Ramsgate plus any local Merchant Navy Day services where our Red Ensign will be raised on September 3.Names were taken for the big Merchant Navy Day parade at Tower Hill in London and a decision on where we visit following the parade.  It was reported that the RBL are chartering a ship to take Normandy veterans back for the service there for June 6; and we do have a Normandy vet in our number who is keen to attend.  Our next meeting is on July 4.

Gristle’s Revenge is a follow-on story from her first published novel Witch on the Warpath and follows the adventures of Onk the City troll, formerly of Hampstead Heath, London and his BFF Harty Springfield, the elm elf.

Set twelve years after the beginning of their relationship, Harty enlists Onk’s help in locating his kidnapped daughter. Their search takes them from their comfortable Thanet homes into the other magical dimensions where they face many dangers and meet new friends.

In addition to being the Founding Chair of the extremely successful Thanet-based writing group Inspirations, (Meets at Westgate Library the fourth Saturday of every month), Carol is currently writing the third story in the exciting life of Onk and Harty.  She is also completing her fourth novel What If? a contemporary Sci-Fi story expected to be published this year.

For copies of this story and all Carol’s work and merchandising go to carolmsalter.com 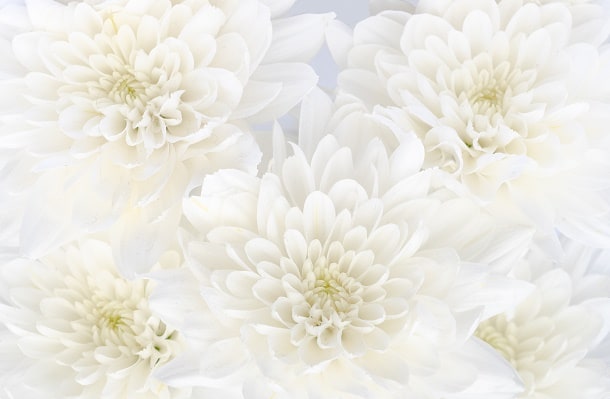 Thanet’s camera club has received some very helpful advice from judges in recent competitions.  In March Malcolm Hardie judged 59 submitted images on the theme of “Patterns in Nature”.  Flowers were the dominant subject and the overall winner was Cherry Larcombe with her beautiful and somewhat ethereal image of Marigold Petals.

On  April 1, Andy Smith was our judge for the Mick Talbot Trophy, this year on the subject of “Close Up”.  Andy gave his critique on 22 prints and 49 digital images, ranging from flora and fauna to architecture and cars.  His eye for detail and succinct comments on each photograph were welcomed by members.  After a close-fought contest, Andy selected the best digital image as “Blowfly on Grass” by Steve Hewitt. The best print was “Mum’s Gift” by Laura Drury (pictured above), which Andy described as “stunning” and was judged to be the overall winner.  Laura was thrilled to be awarded the Mick Talbot Trophy.

The club has several speakers and competitions lined up for April and May.  We welcome competition entries from members but everyone is welcome to attend and to be inspired.

For full details of our programme, membership and other news please www.isleofthanetphotographicsociety,co.uk 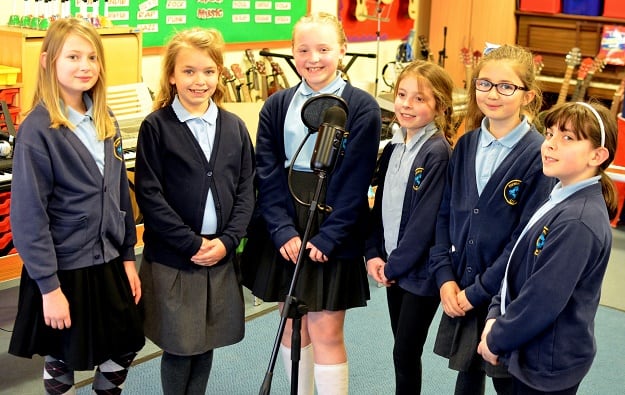 Newington Community Primary School is celebrating its biggest internet hit yet with their children’s performance of ‘The Reading Song’.

Written by music teacher Warwick Eldred and former colleague Hanna Beech, the lively tune is a favourite with pupils and staff and has now found new fans from around the world.

Mr Eldred said: “The video features members of staff reading their favourite books and the whole idea is to encourage pupils to read as much as possible.

“The Reading Song has been enjoyed by 5000 people and has been used by other schools’ particularly during the recent World Book Day celebrations.”

It was performed by the senior choir who were recorded earlier this term. Part of the lyric features this sing-along message:

“When I am reading, I am succeeding, I pick up a book and take a look, my mind just starts to grow.”

Mr Eldred added: “It’s lovely to think so many people have enjoyed the video and song.

“What is really important is that it inspires children and adults to pick up a book and to enjoy the thrill of reading.

“As the song says ‘We love to read’ and we hope that it will ignite a passion for literature in others.”

To enjoy the song go to https://www.youtube.com/watch?v=5n9V2NR-gqk

The school uses songs to underpin learning in a number of subjects including maths, languages and literacy.

Pupils also perform their own AAA Vadio Show each term. AAA Vadio features video and radio articles in an online magazine style programme that is recorded in the music room and studio. It is screened on the internet via the school website.

They enjoyed singing a selection of Disney songs to a huge audience.

Mrs Hewitt our choir leader said ‘Well done to our wonderful musicians who did our school proud!’ 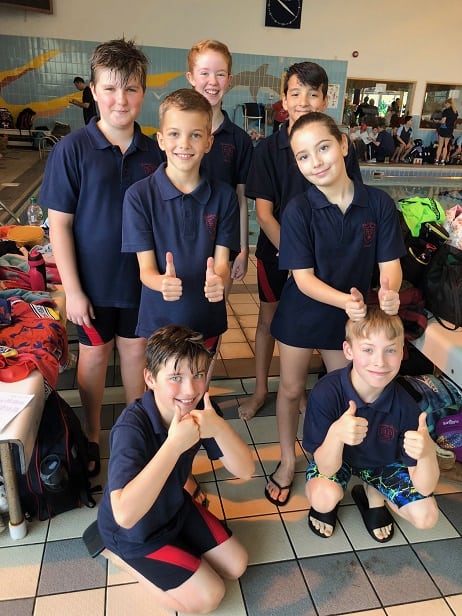 Haddon Dene’s swimming team are Kent County Small School Champions after winning both their medley and freestyle events, leading them victoriously to claim two gold medals.  Lewis, Noah, Rebecca and William fought valiantly in the pool against the best small schools in Kent, winning by a second in the freestyle relay and just a tenth of a second in the medley relay.  They have qualified for the next stage, meaning that they will represent our school at the South East Regionals.

Some of our talented younger swimmers also took part in the individual races.  Giovanna, Finn and Finlay from year 4 took part.  It was a great learning experience for them, which they will take forward to future competitions.

Mrs Parpworth, headmistress at Haddon Dene said: “Our children showed great teamwork and resilience at this event.  They swim every week at our school and they have been relentless in their practice and drills.  Mrs Crompton, Head of PE is just delighted, and we look forward to watching them compete in future events.”