The Clifton Baths could be reopened to the public for the first time in 40 years following a government grant.

A successful bid by Thanet council to the Coastal Revival Fund has resulted in a £44,000 award which will be used to carry out an options study at the historic, Grade II listed site with a view to undertaking a GPS site survey and clearance work.

Thanet council says this could be the first step to public access at the site.

In later years an indoor salt water swimming pool ,a cinema and a theatre or concert hall were created until, from 1926, the site was remodelled under John Henry Iles, owner of Dreamland Amusement Park. 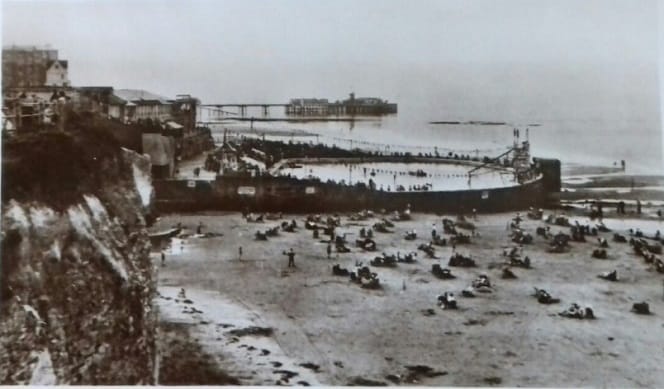 It became a large modern seaside complex with bars, cafes and restaurants on several levels and a large open air swimming pool projecting into the sea. These buildings were built onto and over the remaining parts of the Clifton Baths and the name was changed to the Cliftonville Lido.

The Clifton Baths is the only known example of a sea bathing establishment which was dug out of the cliffs. The site was listed in 2008.

A proposal for a sealife centre at the site, mooted in 2014 by owner Stourside Investments, never came to fruition. Then-director, Paul Eley later resigned from the company as did Alexander Andreev, who was listed as having ‘significant control.’

A Thanet council spokesman said: “We are delighted to learn that the bid submitted to the Coastal Revival Fund for the Cliftonville Lido and Clifton Baths has been successful.

“The bid requested £44,000 to commission a feasibility / options study of the Lido and Clifton Baths site. We will be looking to install temporary lighting and an access stair. This will allow the clearance of debris which fills much of the underground tunnels.

“We want to undertake a GPS site survey to further understand the complex and its historic significance. It could provide members of the public with an opportunity to access this iconic Margate location for the first time in 40 years.

“Grade II listed, they remain of great interest to the local community and we see this as the first step in developing the knowledge we need to underpin the site’s future.

Cliftonville Lido and Baths is one of 44 successful Coastal Revival Fund applications in England which will each receive a grant.

A grant of £50,000 has also been given to the  Birchington Shelters and Amenities Group towards their project of renovating nine sea shelters.

The structures were put in place between the end of the 19th century and the 1920s but have become weathered and neglected.

The Friends of Birchington Shelters group, run by Dave Adams and Karen Everest, launched a campaign to bring them back to their former glory in 2017 and have completed some of the works.