The Spelling Bee bug has caught on at Upton Junior School in Broadstairs.

Pupils from Years 3 to 6 lined up for the first competition of 2019, after choosing their classroom champions in recent weeks.

The finalists were quizzed by organiser Gemma Scarr who invited them to spell a selection of high graded words from the school’s literacy learning curriculum.

The knock-out format saw pupils leave the process if they got a word wrong, but the high standard meant the event in front of the whole school and families demonstrated just how buzzing the Upton spelling bees are.

Eventually the contest was whittled down to a final three who grappled with tricky spellings that catch many people out including committee, embarrassed, camouflage, necessary, disastrous, cemetery, and interrupt. 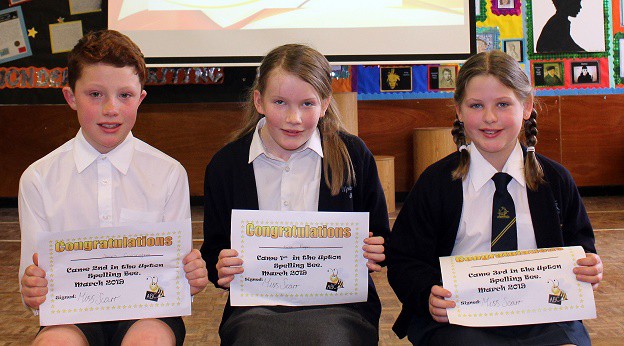 Nia said: “It was pretty tough standing in front of everyone and spelling difficult words. I am glad I have won.”

Poppy added she was “very happy to have got so far in the Spelling Bee which was a lot of fun.”

Miss Scarr, Upton’s head of core curriculum, said: “Having strong literacy skills is very important. We are very proud of the way our finalists conducted themselves and the way they remained composed in a tense competition. It was a tough test and they came through with flying colours.”

Head of School Darci Arthur said: “All of our competitors in the class heats and our finalists have performed exceptionally well.

“It is not easy to remember tricky spellings when you are on the spot speaking into a microphone with a packed assembly hall watching on. Some of our competitors were disappointed to be knocked out and this shows just how determined they are and how much they care.

“The standard of literacy is very good at Upton which is why the Spelling Bee took so long – our spellers just did not want to be knocked out.”

There will be another Spelling Bee at Upton in the summer term. Upton launched its spelling competition this school year with the first competition in December.