Planet Pussy was commissioned by International Women’s Day festival POW! and features textile vulvas of all shapes and sizes in an array of bright colours.

The art work is displayed at the Margate Station Gallery, which is on the platform. There was a sign outside advising of the exhibition subject matter and the display is only visible through accessing the building.

Artist and lecturer Angela Wooi says the work is intended to challenge the shame surrounding female genitalia. “I’m gutted I have been asked to close the exhibition; especially as the complaints came from women.

“The work is interactive so people would write a story, good or bad, about their experiences (surrounding female genitalia) be it child birth or menstruation and put the paper in the vulvas. I was then going to create a book afterwards.” 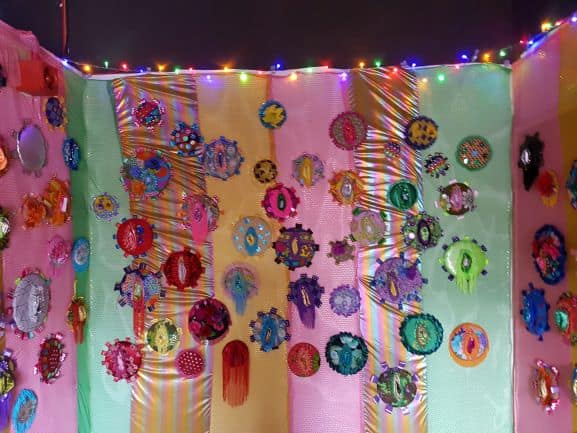 Angela, who divides her time between Maidstone and Margate and has a grown-up daughter, says the work has been well received. “I love the fact it was accessible to so many people. When trains were cancelled people came to have a look and really enjoyed it. I have had people travel from London come specifically to see it.

“The station manager has been really kind and was supportive of the exhibition but says he has to act. I really wanted to talk to them (the complainants) as I always welcome feedback but I am not sure if they have even seen the exhibition.”

The exhibition is now only available to view by appointment until March 17. For further information email angelawooi@hotmail.com

The Isle of Thanet News has contacted Southeastern for comment.