From earning £40,000 a year and owning her own home to being forced to live on £1 a day for food and sleeping in her car. This has been the stark reality for former local authority worker Monica Mendez, contributed to by the change of state pension age for women which has especially hit those born on or after April  6,1953.

The mother-of-two left the Midlands and an unhappy marriage to start a new life in Thanet in 2011. She was 55 and had taken early retirement with an occupational pension and some savings which she planned to use as a deposit to buy a new property.

But a four year court dispute with her ex over the Midlands property ensued, meaning Monica was in a position of paying for the empty property as well as living costs in Kent. The costs mounted up and her nest egg disappeared. Despite eventually winning the case all the money awarded went on mortgage and council tax debts.

At that time Monica was temping for the NHS Trust to supplement the pension and, although she could no longer afford to buy a property, she could rent. But in January 2017, at the age of 60, she became unemployed when the Trust had to cut back on agency costs.

She said: “When that happened I had to go back to living on £140 per month after rent and I just couldn’t do it. Every month I owed money. I became quite ill and depressed.”

The changes in legislation meant Monica was not entitled to the state pension she thought she would get aged 60. Instead she has to wait until she is 66. The occupational pension also meant she could get no additional help in benefits.

Monica said: “If I had been receiving state pension the amount per week would be more than I am living on for the month. Legislation already penalises women and  I’m  penalised again for putting into an occupational pension. How does that make sense?

“As a result of this I have £1 a day to spend on food, making casseroles and stews to last. I was living a pauper’s life even though I had worked since the age of 19, raised a family, studied three evenings a week for qualifications and had always owned my own house since the age of 23. Was it worth it?”

North Thanet MP Sir Roger Gale stepped in to help when Monica became overwhelmed with debt and bailiffs and TMS property agency helped when she needed a new home. She spent five years in a property she loved in Broadstairs but despite an understanding landlord Monica had to leave that home when it just became too much to afford and her hopes of getting more agency work were crushed.

She said: “ I desperately wanted to work, I had to have something to get by, but it just wasn’t happening, they would say I was overqualified. At one interview  I could barely afford the petrol so I took my car off the road, just keeping the insurance, and kept it on the drive. I was then doing a nine mile round trip walking to interviews, so ended up looking like a wet rag. Whatever the government thinks, you can’t get another job when you are 60,.

“At this point I was going three days a month without food and was living on hot drinks. I would have a payment due on the Monday but by Sunday I would often be down to drinking just hot water. It got to a stage, where some days I did not leave my bed other than for necessity as I felt there was no point. Every month I had days without even basic meals, and some days I stayed in bed to keep warm. I could see no end.”

Living in the car

At the end of last May Monica moved out of the Broadstairs house but removal and storage costs left nothing for rent – meaning she spent more than a month living out of her car as she was unable to get any help.

She said: “I was not deemed to be vulnerable by the local authority list of definitions, so I was left to live in my car with all the associated risks. I was parking in supermarkets to get access to the free wi fi to search for accommodation.

“Had I been receiving my state pension, as per my plans made many years before, none of this would be happening. I may not have been living rent or mortgage free, but I would not be in poverty.

“What I was being asked to live on for a month, was well below the weekly amount I would have received in my State Pension. I was being penalised for paying for/preparing to enhance my retirement. It was not a gift, it was something I paid for each month from my salary, and I considered myself lucky that I had been able to do that for all those years. I look back now, and can see very little benefit of that approach.”

Monica finally was offered the use of a premises that was undergoing renovation and then, through her own efforts, found a flat in an over-60s block in Ramsgate.

She is suffering ill-health due to the effects of poverty but says at least she now feels secure.  She has also produced a book of her experiences and those of other women affected by the state pension age changes who she has contacted through involvement with the Women Against State Pension Inequality (Waspi) 2018 group.

The experience has had a lasting effect. Monica said: “I will continue to carry the emotional scars from that experience for the rest of my life. I will never forgive for my options in life being reduced to such matters as whether I can go without food for up to 3 days each month. I will never forgive for being made to feel like there is no point in leaving my home for days on end, or even putting a brush through my hair.”

Despite the trauma Monica says she is determined to fight alongside other 1950s women to highlight inequalities in the pension system that have left many women facing poverty. 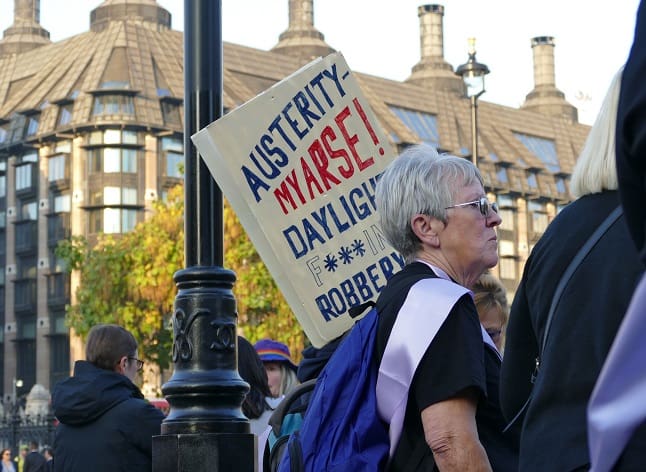 Scores of Thanet women are among the members of the Women Against State Pension Inequality (Waspi) 2018 east Kent branch.

The campaign aims to highlight hardship and unfairness the movement says is suffered by women born in the 1950s, on or after the 6th April 1951, as a result of the Government’s lack of notice about alterations to the State Pension Age (SPA).

The aim is to bring it in line with men’s retirement age. Increasing life expectancy means the government needs to make pension payments later in a person’s life.

But Waspi, and other protest groups, say the changes were not publicised after a decision in 2011 to bring them forward, leaving many women unprepared and facing devastating hardships.

A version of the plans was first outlined in 1995, when the then-Conservative Government planned to gradually raise women’s retirement age to 65 between 2010 and 2020.

This was followed in 2007 by a Labour announcement that both men and women would see their retirement age go up to 66 between 2024 and 2026.

But in 2011, Chancellor George Osborne brought forward the timing of both changes meaning women who had been expecting to start drawing their state pensions between 2016 and 2020 found out that they would face a delay.

A further pension age rise to 67 is planned by 2028 and another to 68 is likely in the following decade. 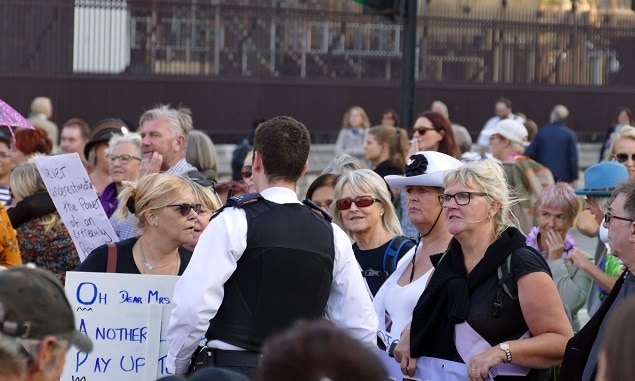 Penny-Anne Wells, of the East Kent branch of the Waspi 2018 campaign says the fight for justice is not about the equalisation of pension age for men and women but maladministration by the Department of Work and Pensions in the way the changes were introduced.

She said: “People weren’t notified so there was a lack of time to plan and this left many women  in a difficult financial situation.

“For some women this has been quite devastating, they may have given up jobs thinking they were due pension or been made redundant and thought they would only have to manage until the pension age.

“It means people have been using up their savings to survive and many simply can’t find a new job when they are aged 60 plus. Some women have lost everything other women in our group are nurses and just are not physically capable of carrying on until they are 66 or 67.

“We are not against equalising the pension age but there should have been adequate notice. Pensions at the same age still doesn’t mean equality, women often have taken breaks to raise family, so have less contributions meaning lesser pensions than men and they generally live longer so are even poorer.”

The parliamentary ombudsman was reviewing thousands of maladministration complaints against the Department for Work & Pensions (DWP) over the way the pension age changes were dealt with.

However, these have been put on hold after another campaign group, Backto60, was granted a judicial review to determine whether the pension age increases  were lawful.

The ombudsman will therefore await the outcome of court proceedings before deciding on what can or should be investigated.

The body will continue to accept complaints referred by MPs but there will be no action taken until there is an outcome from court proceedings.

The judicial review is expected to take place this May or June.

Penny, from Westgate, says Waspi is pleased about the judicial review but the maladministration complaints should not have been closed.

She said: “The judicial review is about whether the increase in age was a breach of UN convention which is a different thing to the complaints of maladministration.”

That point has been taken up Labour MP Frank Field who has written to the DWP asking for more details about the cases closed by the Independent Case Examiner,

Penny added: “We are still campaigning and are not giving up.”

Further information about the Ombudsman process can be found at https://www.ombudsman.org.uk/making-complaint/what-we-can-and-cant-help/complaints-about-communication-changes-womens-state-pension-age

East Kent Waspi will be taking part in the POW! (Power of Women) festival, joining a women’s parade today (March 8).

The Still We Rise parade is the opening event of this year’s festival and will be at Turner Contemporary from 5pm-7pm.

To get involved with the Waspi campaign find east Kent Waspi on facebook,  email eastkentwaspi@hotmail.com, call Penny on 07769159400 or find the national campaign website at waspicampaign2018.co.uk