Ramsgate RNLI has been presented with a cheque for £802 by town promoter Rebekah Smith from money raised by small businesses during the boat and Harbour Arch Illuminations in December.

Also present was Martin Morgans from the Royal Temple Yacht Club who co-ordinated the annual event encouraging the boats to light up. He worked side by side with Ramsgate Town Council to include town businesses and make it into an even bigger spectacle, one which attracted crowds from far and wide and even Europe.

This year was the largest light up of boats yet and crowds came to witness the sight as well as the laser light show arranged by the town council.

The RNLI added to the event by lighting up their relief boat Trent in the harbour and managed to persuade Santa to come out for a tour of the harbour despite atrocious weather. 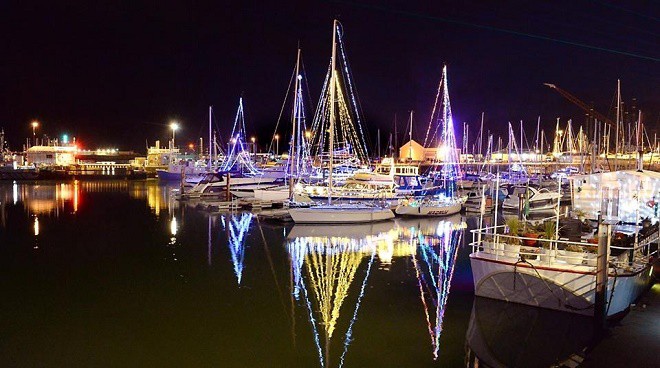 Ian Cannon, Coxswain of the RNLI said: “We would like to thank everyone who took part in last year’s Illuminations, and we are happy to accept the cheque for £802 which will help us to continue saving lives at sea, as the RNLI is fully funded by voluntary contributions.”

The following local businesses contributed to the total raised by sponsoring an amount for each boat that lit up: