On an ideal afternoon for rugby, with spring-like sunshine and temperatures, Wanderers played their way into the Spitfire Gold Veterans’ Cup Final.

Thanet played up the slope in the first half and after a couple of minutes an early attack and good handling along the line brought a try through Tom Longdon. He also converted to establish an early 7-0 lead. Andy Letts received a badly cut eye from an elbow and departed for A&E.

Maidstone had some big forwards and great defence was needed from Wanderers to keep their line intact as the visitors battered away for long periods of the first half. Ben Massey played a major part in the defence and in the build up up to Wanderers second try. Good work from him at a line-out set the attack which ended with Longdon teasing the Maidstone defence before chipping over their heads and gathering before touching down and converting to give Wanderers a 14-0 lead at the break.

Two minutes into the second half more nice handling ended with Jonty Stephens finishing at pace along his wing. Two minutes later the score became 26-0. A barnstorming break from Michael ‘Simmo’ Simmonds was finished off by Steve ‘Buster’ Merryfield  with Mickey Capeling converting. Richard Case playing at full back powered over next under the posts and Capeling added the extras. 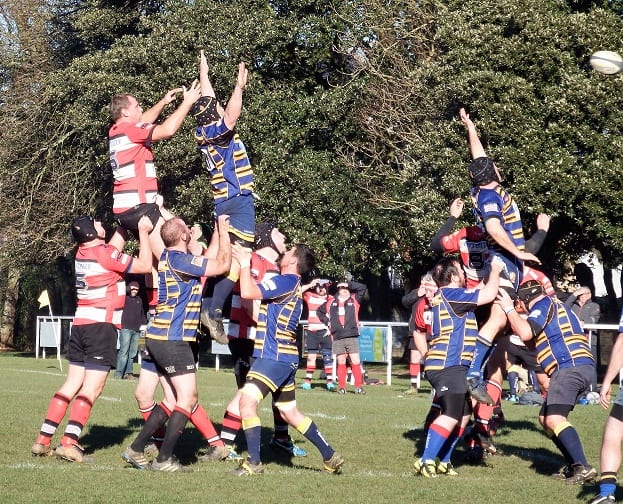 Wanderers scoring spree ended after ten minutes of the second half when Simon Harris closed out a forwards break that drove and passed its way to the left corner. An excellent conversion from Case made the score 40-0 with half an hour to play. There was to be no further score for the home side but Maidstone now trusting their backs ran in three good tries.

The last of these followed a lovely interchange and an outrageous offload that made the final score 40-19 and sent the good crowd to the clubhouse in good spirits after an entertaining afternoon.

The final of the Spitfire Gold Cup competition will be against Westcombe Park Vets on April 14 at Maidstone’s ground. Kick Off TBC.

Andy Letts says injury ‘Not too bad’ and hopes to be patched up and available next Saturday.