Councillors are due to make a decision tonight (February 26) on proposals for a Westwood Village scheme.

The project to build up to 900 homes, a school, shops, hotel, pubs and more at Westwood will be phased over 10 years.

Greenacre (Thanet) Ltd first revealed details of the Westwood Village at two public consultations in 2017. It has since made amendments, including an increase from 850 homes to 900.

The firm says it is proposing new homes, including affordable homes, 20 acres of public open space, retirement homes, a primary school and a mix of commercial and retail properties including doctors, dentists and vets.

The 97.4 acre site runs from the Toby Carvery between Haine Road to the East, across to Manston Court Road to the West, taking open fields extending from the Orbit properties on the Star Lane Link Road, and South to Valley Road on the borders of Bradgate Caravan Park.

The plans will include a new inner rink road and a spine road, health facilities, a convenience store, two-form primary school, possibly a hotel, restaurant and pub, homes and open space.

Greenacre says: “The vision for Westwood Village is to deliver a sustainable new residential-lead mixed use community that meets the needs of both existing and future residents. 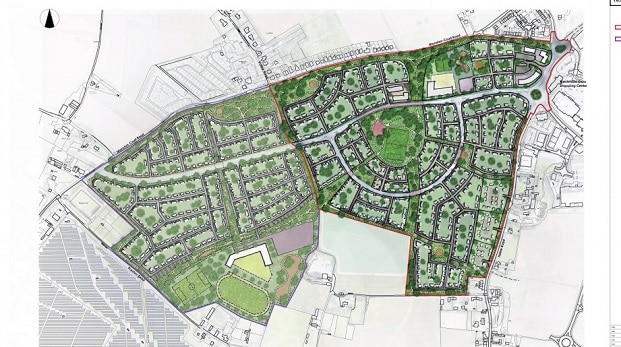 The housing will be split into five categories:

Open spaces will include playing fields and allotments.

Phases will be completed sequentially with an aim to finalise Westwood Village by 2028.

Ten representations objecting to the scheme were submitted to Thanet council. Amongst them is one from Margate Civic Society which says there are ‘extreme concerns’ over “the massive increase in vehicular movements.”

The Campaign for Rural England also says the application is incomplete and should be rejected.

Councillors have been advised to defer and delegate the decision to planning officers subject to legal agreement which will include significant developer contributions towards education, youth facilities, libraries, £907,200 towards funding a new GP hub at Westwood, £96,354 towards Age UK Thanet expansion and a whopping £5.07million towards a new link road or other traffic improvements.

Councillors will meet tonight (February 26) to discuss the application.

Based in the UK, they work in partnership with governments, investors and charities around the world to identify investment opportunities that are both profitable and socially responsible.

They are working on the Westwood Village with ADAPT Real Estate, an owner-managed business specialising in the asset and development management of multi-sector real estate