The work of Nick Laister, co-founder of the Dreamland Trust and the man who spearheaded the ‘Save Dreamland’ campaign, was recognised at the preview of a new film about the amusement park last week.

Business leaders and supporters of the Trust at the event on February 13 heard a presentation given by long standing trustee Andrew Baker on how Nick and his colleagues fought to save Dreamland from redevelopment and saw it re-opened in 2015.

Nick narrated a new short film commissioned by the Trust which also contains personal stories from local people about their memories of visiting the park. ‘The Story of Dreamland’ chronicles the rollercoaster journey of the amusement park from its origins as a music and dance hall in the early 1900s to the thriving park it is today. 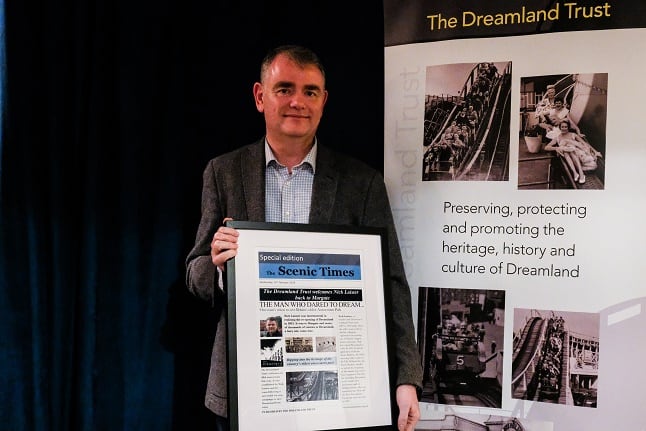 Nick (pictured) said: “I first visited Dreamland in 1993 and, as a planning and development consultant specialising in amusement parks and other visitor attractions, I recognised the historical significance of the Scenic Railway. I later applied and got grade II listed status for it. This was a key factor in the survival of Dreamland. My colleagues and I worked tirelessly to campaign to Save Dreamland and I am delighted to see the park thriving today.”

The film, which was made by Inside Job Productions with a grant from the Heritage Lottery Fund, was shown at a special preview at Dreamland.

Bernie Morgan, Chair of the Dreamland Trust, said: “Thousands of people have visited Dreamland with family and friends, having fun and making their own memories. This would not have been possible without the drive and enthusiasm of a small group of people led by Nick Laister who went on to establish the Dreamland Trust.

“We are so pleased to have had the opportunity of honouring Nick in this way and are delighted to be able to call him a friend.”