The visitors remained in third place after this match whilst Wanderers, after picking up a losing bonus point, stay in tenth position. Thanet rested Danny Clement and Andy Letts who have been carrying injuries, Captain Adam Gaddes has also struggled with an injury and was on the bench.

David Lemon is likely to miss the rest of the season with a finger injury. On the plus side Wanderers were delighted to welcome Jimmy Green back after an eight year stint with Canterbury where he made 185 first team performances. Connor Brown was due to play for the second XV but was a welcome returner in the eight shirt for the first XV.

Wanderers kicked off down the slope with a strong wind gusting diagonally across the pitch towards them. Early penalties put Park on the front foot but the wind affected their line out accuracy and Wanderers defence was resolute. Penalties for Wanderers set them deep in the opposition half and with hooker Neil Wakefield regularly finding his man at the line out Thanet moved close to Park’s line. 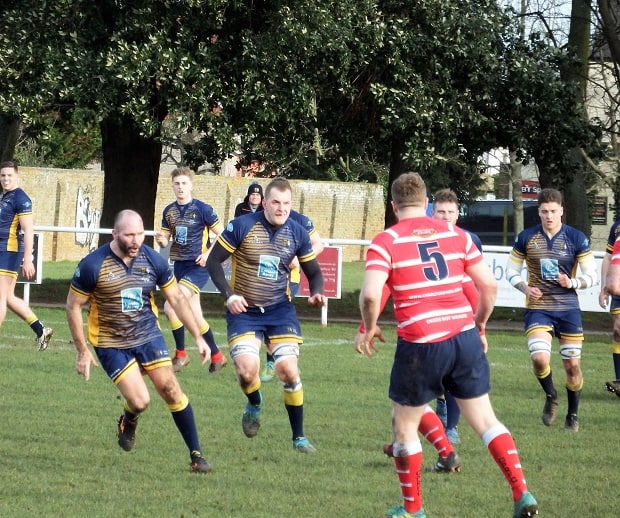 Brown broke the defensive line and when stopped handed on to Charlie Knight whose power and speed were too much for Park’s defence as he burst over for the opening try after half an hour. Rolfe’s conversion into the wind was wide. The visitors hit back with strong forward pressure and Green was prominent in some great home defending with unrelenting chop tackling.

Two penalties took Park into Wanderers danger zone and when a maul collapsed,  referee Gareth Edwards awarded a penalty try giving the visitors a 7-5 lead after half an hour. End to end play saw Brown again dragged down as he advanced to the line before a dangerous break by the visitors was stopped by a deliberate knock on by Knight who was yellow carded.

Four minutes later fellow winger Reece Hougham also saw yellow for not rolling and Wanderers were down to thirteen players. Park were quick to pour through the gaps in Wanderers defence and a second try in injury time meant they led 14-5 at half time. 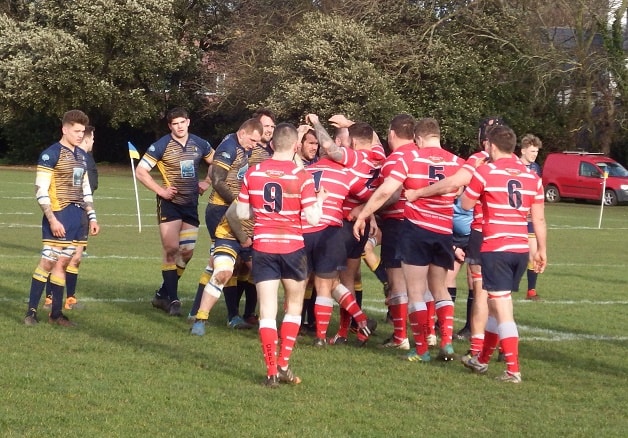 Depleted Wanderers defended excellently in the opening minutes of the second half. Wakefield broke down one Park break with a fine tackle before Knight returned. Park’s loose-head prop was next to be shown a yellow card and two minutes later their No 7 also received ten minutes in the sin bin. Wanderers were back to full strength as Hougham returned and three minutes later Wanderers pressure was rewarded with a well worked try.

Tom Walton broke and made good yards before Brown showed great strength to touch down and reduce the deficit to 14-10. Brett Scott broke strongly in midfield before Park’s replacement prop was shown yellow for a high tackle.  Rolfe stroked over a penalty for 14-13. The visitors loose-head received a second yellow and was shown red. The resultant penalty was good from Rolfe and Wanderers were ahead 16-14.

A long distance penalty from Park went wide as the depleted South Londoners raised their game but when Wanderers were offside Park regained the lead at 17-16 with a straight-forward penalty that almost skewed wide. Time was running out as Wanderers swarmed into Park’s half. Walton’s kick set good field position but a scrum penalty allowed Park to clear.

Nick Herbert’s back to back tackles kept the pressure on and superb work at the breakdown from Sam Taylor brought a penalty opportunity on half way. Dan Hill’s kick went just wide and moments later Rolfe’s drop goal attempt was short. The final whistle brought relief for Charlton Park who had mounted a great defensive effort with reduced numbers during the final half hour of the game. Wanderers were disappointed not to have edged the match but will hope to carry the intensity and character displayed today into the remaining six league matches. 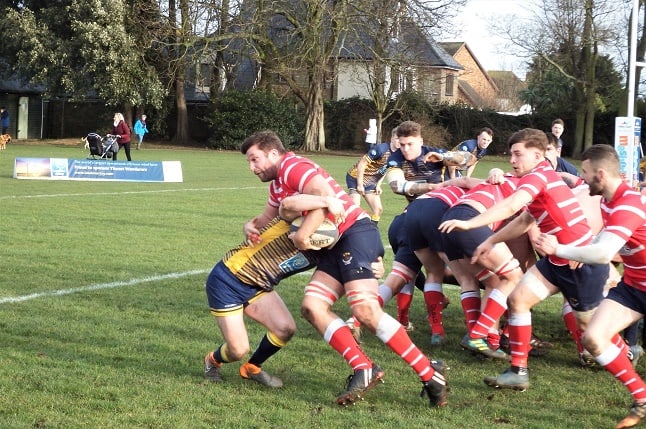 No replacements were called up, a testament to the fitness and stamina of the fifteen starters. Marius Thompson at outside half punched considerably above his weight in the tackle in the backline that tackled like demons in the face of Park’s onslaught. The battle between the two packs was an enthralling one. Kamil Wiecaszek at tighthead was very mobile and showed well in defence.

The pairing of George Orton and Arek Janeczko in the second row.  Flankers Scott and Taylor provided another defensive master class but it was Connor Brown who was announced as the Malachy Egan Man of the Match award. His devastating carries not only brought him a try but carried the battle deep into the visiting defence on many occasions.

This weekend the team travel to Heathfield and Waldron RFC in Sussex who are currently one place behind Wanderers in the league and in the relegation zone The home fixture resulted in Thanet’s biggest win of the season by 44-0 against a team hit by injuries. They will no doubt pose a sterner test on home turf. Kick off 2.30pm.