Thanet council is reviewing its contract with Kingdom Services Group ‘litter police’ following a number of complaints about the firm.

Kingdom  won a three-year contract with Thanet council in September 2016 to provide enforcement and issue fines for those caught dropping litter or not cleaning up after their dog.

But there have been complaints that the methods used were heavy-handed or simply unproven. In 2017 The Isle of Thanet News also exclusively revealed  the litter cops were themselves being investigated for littering.

Now Thanet council has said it is reviewing the contract on the heels of a case against a Margate gallery manager  who vowed to ‘fight until the end’ after disputing an £80 penalty notice for spitting.

That case will now be dropped.

Dean Stalham, who runs The Stretch Outsider Arts Gallery in The Centre, was issued with the notice outside the Dalby Cafe more than one year ago but refused to cough up the £80 fine, saying he had simply been choking on a bit of bacon and did not spit in the street.

The case ended up in court with an initial hearing at Canterbury Magistrates on January 22 and a trial scheduled for Folkestone Magistrates Court on March 25. 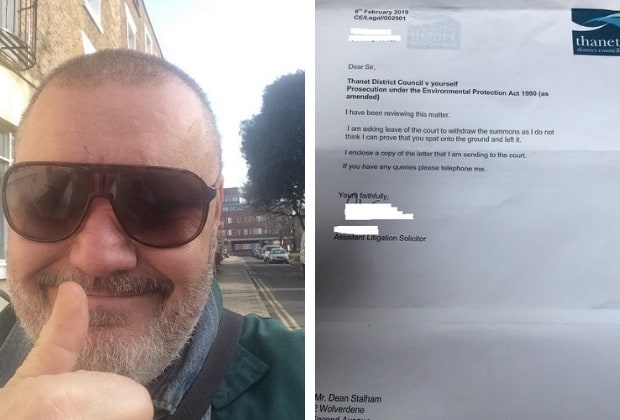 But now Mr Stalham has been informed that Thanet council has reviewed the case and asked for it to be withdrawn because the enforcement officer no longer works at Kingdom and “is not contactable.”

The authority also revealed it is now reviewing the entire Kingdom contract in light of the number of complaints about the service.

A Thanet council spokesperson said: “We would not comment on an individual case, however the council will be reviewing this contract with Kingdom. We have taken each reported incident very seriously, all of which have been thoroughly investigated.

“Keeping the local environment and the streets clean remains one of the council’s top priorities, with nearly £2m being spent on street cleansing this year alone. Kingdom is one way for the council to enforce its zero tolerance policy to dropping litter in public.”

Kingdom was contracted by eight Kent councils but the firm was caught in controversy in 2016 when a Panorama investigation revealed staff were bagging bonuses for dishing out tickets on questionable grounds.

From the three months July-September last year the firm issued more than 1,800 litter fixed penalty notices and carried out over 1,300 enforcement actions.

Dad-of-five Dean, who lives in Cliftonville, says the experience has left him frazzled but he hopes his victory will inspire others to “stand up to bullies.”

He added: “I said I’d see it through to the end and, after 14 months of letters, court dates and legal grillings, I now feel very relieved.”

Dean says he is also pleased to hear the contract with Kingdom will be reviewed. He said: “I feel like David against Goliath. I had doubts at time but always hoped that the truth would prevail.

“I’m very happy for the people of  Thanet  that this monster known as Kingdom may now be bought down.”

Thanet council is not the only authority to review its Kingdom contract. Last year Wrexham council binned the firm, issuing a 90 day notice of termination following mounting complaints about the ‘zero tolerance’ approach of officers. Liverpool City Council also axed its contract with the firm last year. And last month The Guardian newspaper revealed that whistleblowers claimed officers targeted vulnerable and elderly people and even hid in bushes or behind cars to improve their chances of catching members of the public.