Thanet council says it is pursuing enforcement action against a Traveller group which left tonnes of rubbish at the authority owned car park next to Dreamland.

The group, that had been at the Margate site since January 4, were evicted yesterday (February 11)  after a court order for removal was ignored. There were around 26 caravans at the site according to residents whose properties overlook the area. 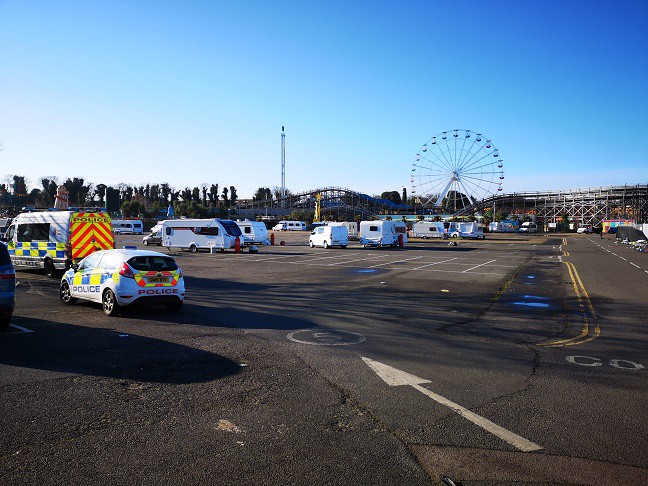 There are also caravans at the Manston airport site with fencing being removed at the Minster end to allow access.

Thanet council may now have to begin the entire removal process again.

The authority says it will pursue criminal charges.

Cllr Lesley Game, Thanet District Council Cabinet Member for Safer Neighbourhoods, said: “The behaviour of the Traveller group that has just been forcibly removed from the Dreamland car park is symptomatic of why many residents are unsympathetic.

“The large group of vans and caravans created tonnes of unsanitary household waste within a matter of days – all of which our street cleansing officers have had to clear. There has also been extensive fly tipping, everything from rubble and broken toilets to kids’ scooters and bikes – all just dumped without a care.

“As a district we should not have to spend our limited resources picking up after a group of people who have no respect for the community and environment. We are using all the powers available to us to ensure that enforcement action is taken and that these acts of fly tipping are dealt with. We will pursue anyone who commits criminal offences.

“We totally understand the frustration that residents have expressed and while we are obliged to follow due legal process, it is clear that if a group can simply relocate a few miles away for the cycle to begin again, it is not a workable solution. We are looking at ways that we can address this in the longer term.”

A spokesman from the Friends, Families and Travellers organisation said a lack of official sites is forcing groups to pull up on public land and not enough is being done to address that issue.