A new welcome to Margate sign has been installed on the Canterbury Road/Marine Terrace roundabout thanks to funding via county councillor Emma Dawson’s authority allowance.

The sign, which includes reference to Turner Contemporary and Margate’s status as one of the surviving limbs of the Cinque Ports Confederation, cost £1,020 including labour paid for out of Cllr Dawson’s combined member’s grant.

Cllr Dawson said: “I funded and requested it because I thought it would brighten up the seafront and welcome people in. Margate is an arm of the Cinque Ports of Dover and so I went through quite a few channels before this was agreed officially.

“Ian Russell is the cinque port registrar and he gave permission to use it on the sign. The history is very interesting for Margate. I personally feel it gives Margate a bit of historic prestige and looks great there. 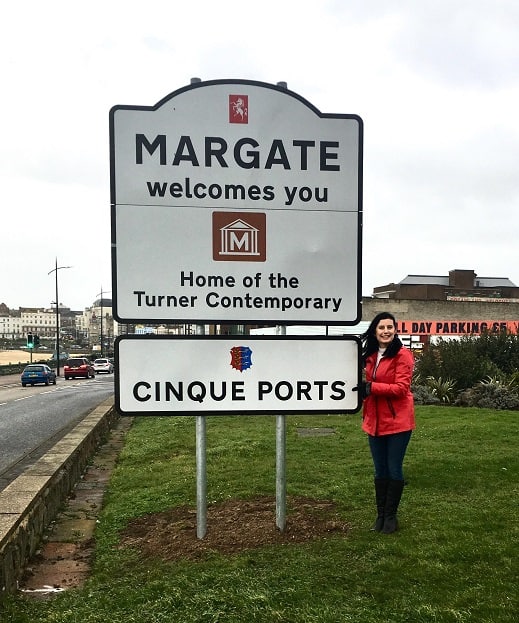 “There are 5 cinque ports and Margate is one of the surviving seven limbs. The limbs were originally associated with the ports and joined in the confederation to help provide ships and crew. Margate is the limb of the cinque port of Dover.

“I chose that area for the sign because Westbrook has had no funding in the last two years and I felt that because of this the area could do with something to welcome people.

“I was really pleased to see it installed as it’s taken quite a while to look at the design, work out the size and what to put onto it. I thought putting the Home to Turner Contemporary was appropriate because we are hosting the Turner Prize being present here this year. It is an uplifting feature and I hope residents feel the same way.”

However, some issues – and eyebrows- have been raised, including the use of a museum symbol rather than an art gallery one, the use of ‘the’ before Turner Contemporary and displaying cinque ports without adding ‘limb.’

Cllr Dawson said KCC has templates for boards and the museum icon is also used for galleries and the space was too restrictive to add the limb explanation.

Find out more about the history of the Cinque Ports here