The state-of-the-art building, which includes a dedicated training centre, has been in use since January 7 after crews moved out of their home of 113 years in Effingham Street. 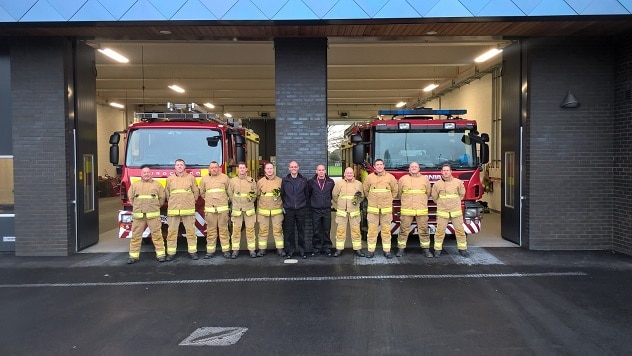 It is a base for the British Red Cross, which has a vehicle in the bays, ready to respond to incidents which require the charity’s support. The station also provides space for other agencies, such as police and the ambulance service, and boasts a decontamination vehicle for use in chemical incidents.

Inside the building is a far cry from the much smaller Effingham Street property which was once a private home on grounds belonging to Rear Admiral William Fox. The house was converted into a fire station and the town library and Clarendon House girls school were built on the land.

The station, bought by the Ramsgate Corporation, was redesigned for the town’s fire crew and horse drawn manual fire engines and opened in October 1905. 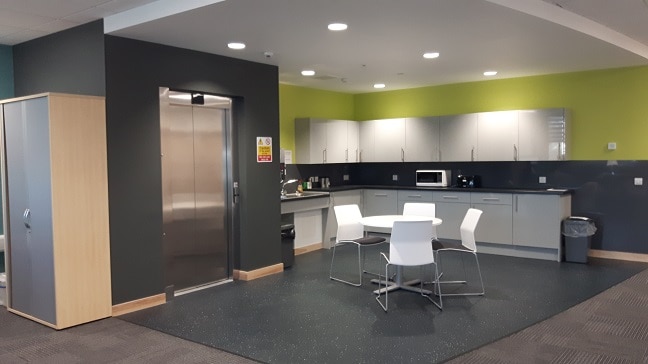 The new station in Newington Road offers a gym, office space, proper equipment storage and, of course, the training centre which means firefighters no longer have to travel to Ashford or Maidstone for sessions.

There are also good-sized sleeping quarters, private study areas and a communal room and kitchen. 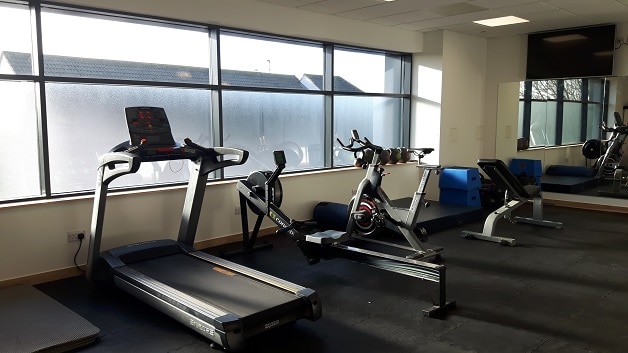 Station manager Jim Ledger said: “The main benefits are having the latest technology, proper servicing rooms to maintain the equipment and the training area.”

The change in how the service now operates is also huge. Retired firefighter Dusty Miller, who has worked to compile a full history of Ramsgate’s crews, was in service from 1972-1992.

He said: “It was the only job I ever wanted from the age of 4. You used to have cards with the roads on them, route cards, although we mostly memorised them. The new station is unbelievable, like going from a one-bed flat to Windsor Castle!”

Nick Chard, chairman of the Kent and Medway Fire and Rescue Authority Chairman, is officially opening the station and training facility now (at noon).

He said: ““I am delighted to be officially opening the new Ramsgate fire station that will provide effective emergency cover for the area for generations to come.

“It’s in a good location for road networks that will help us provide an excellent emergency service for local people. 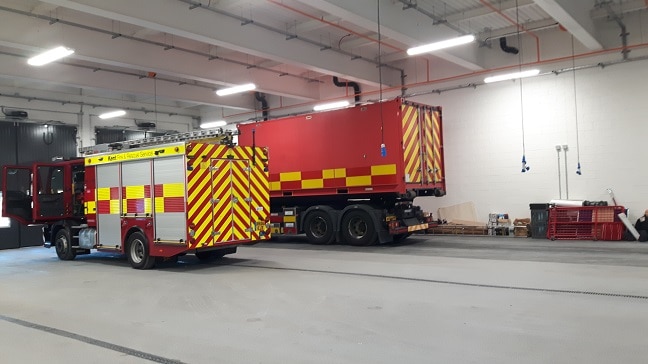 “As well as being an operational fire station and training facility for firefighters across the county, it’s a hub for partnership working with agencies such as Kent Police and South East Coast Ambulance Service, as well as the British Red Cross who we’re happy to share our new premises with.”

The Effingham Street building has been bought by Ramsgate Town Council. The authority is consulting on what uses the community would like put in place.

Ahead of the official launch, children from t St Laurence-in-Thanet Church of England Junior Academy enjoyed a preview of the new station. They had fun touring the site, meeting the crews, spraying water and learning some top tips about what to do in the event of a fire. 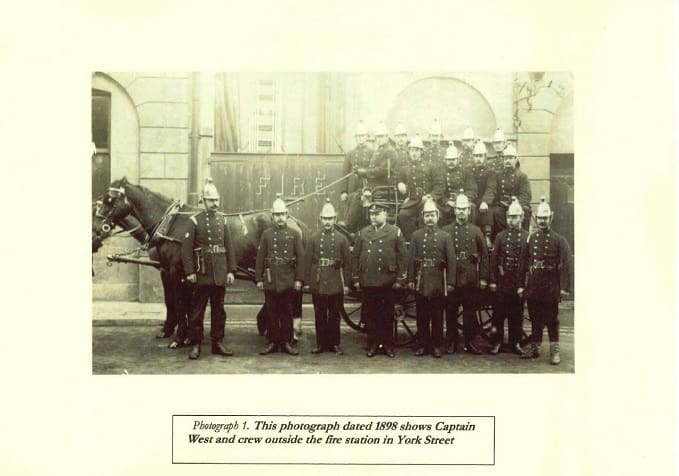 At this time all fire brigade activity was directed by the police under the control of the superintendent, and the fire station was next door to the police station. Fire engines consisted of a manually operated pump pulled by horses and directed by a coachman. Incidents at night were brought to the attention of police, and firefighters acting as messengers had to knock on the doors of crew members’ homes to alert them as there was no living premises.

The process for alerting firefighters was assessed following a serious house fire in Rose Hill on the night of 5 November 1886, in which six members of a family died. There was mass media coverage and the Coroner recorded an open verdict, and made the following comment: “While we are of the opinion that no blame is attached to the police or fire brigade we think a more expeditious method of calling the brigade together should be adopted, and that the fire escape house should be kept unlocked at night.”

This led to the officer in charge, Captain John Matthew, being dismissed, and the appointment of Captain Charles West from Paddington Fire Station London. His first tasks were to update equipment and find new premises.

As time passed other serious incidents occurred and the press were highly critical of the town council, as they felt no effort was being made to find new premises. Finally Captain West, with the assistance of the press, won his campaign and the new station was proposed on 29 August 1904. It was agreed that number 20 Effingham Street would be converted into a fire station with living premises. 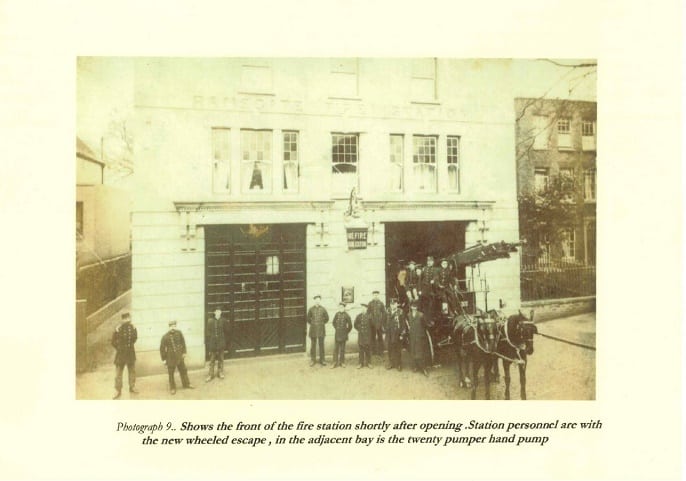 When the fire service took over the Effingham Street building, it was a private residence that had been empty since 1899. It opened as a station following conversion works on 17 October 1905 by the Mayor Councillor Dowling – 19 years after the fatal fire at Rose Hill. Captain West was always trying to improve facilities and processes, and he persuaded the committee to install call out bells in the homes of 20 firefighters connected by electric wires from the station, as well as street fire alarms connected to the watch room at the station.

He also worked tirelessly for the purchase of new fire engines and secured a manual 20 pumper (this needed 20 people to pump the water by hand – anyone on the street could be asked to pump water, not just firefighters). 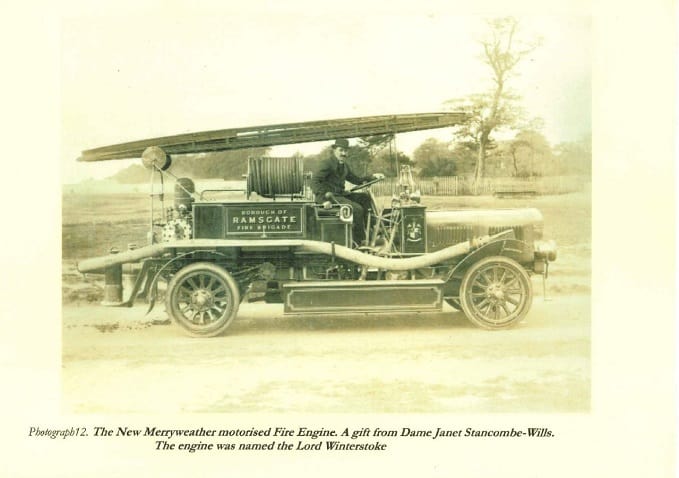 At the start of World War One Captain West made a formal request to the committee to purchase a motorised fire engine, but he never saw his dreams fulfilled. He died in March 1915 from injuries he sustained when a horse drawn fire engine completely overturned.

Just three months after his death, the committee accepted Captain West’s idea of a motorised pump and agreed to purchase a Merryweather fire engine, which carried 1800 litres of water. Captain Alfred Johnson was appointed as officer in charge in June 1915.

At the end of the war firefighters were recognised for their gallant work throughout the conflict, and in December 1920 Chief Fire Officer Jonson was awarded the Kings Police Medal, and 16 Ramsgate firefighters were awarded the OBE for ‘distinguished service during the war’.  Awards were also made to Margate and Broadstairs crews.

In February 1938 the Air Raid Precaution Scheme Act was introduced, and under the act the Home Office gave additional equipment to Ramsgate station. This consisted of one large pump, three trailer pumps and fifteen light trailer pumps.

Many incidents were recorded in World War Two, but the heaviest bombing raid took place on 24 August 1940. Ramsgate was subject to a massive attack in which 500 high explosive and 40 unexploded bombs were recorded. On that day, 32 people were killed in the town, 10 seriously wounded and 48 had minor wounds.

One of the many heroic stories from that day involves two firefighters George Moore and Herbert Wells. They were cycling to duty when they were struck by flying shrapnel. Wells was the most seriously injured, and Moore, despite enemy gun fire in which he received three bullet wounds to his arm, one of which severed an artery, he managed to drag his colleague to safety. Despite his own severe injuries, Moore went to seek help and staggered 300 yards across rubble, broken glass and telephone cables to a nearby first aid post. For his actions Moore was awarded the George Medal.

The Effingham Street station was designed for horse-drawn fire engines, and as firefighting and kit developed, a new space was needed. Modern fire engines didn’t fit into the station without adaptations such as making ladders shorter, and therefore Kent Fire and Rescue Service deemed it time to move on from the station where firefighters had been based for 113 years.

A new location closer to key road networks was found in Newington Road, and work to build a new station fit for 21st century firefighting started in 2017 and was completed in late 2018.