Two young friends who created a dance video to inspire people to stand up to bullying and go for their dreams are hoping to share their message with isle schools.

Wisewood Dance members Liberty Greig, 11, and pal Evie Stocker, 10, are dance duo 2Stepz. They decided to make a video with a message after Liberty suffered some bullying on her return to school from a spell dancing in the West End.

The pair were also prompted by friends who had been targeted by bullies, including video actor Lilly-Paige Anderson, and by the brutal video of Charles Dickens pupil Evee-Ann Cooper being attacked by another schoolgirl.

Liberty’s mum Michelle said: “They wanted to do a dance video but one with a meaning behind it so they decided to do it about bullying and following your dreams, not letting negative comments bring you down.”

The video has proved a hit with some 53,000 views. It was shot by isle videographer Sean Brady from Redcape Productions and also stars youngsters Lilly-Paige and Ashton Sharp. Lilly is a  European kickboxing title holder and trains at The Falcons Kickboxing Club. Coaches Mark White and Kate White are offering free lessons at the club for anyone that as been a victim of bullying. Find the Falcons facebook page here

Rosie Warren, Gracie Warren and Hollie Farley feature as the trio of schoolgirls and choreography was organised by Mikey Ureta and Summer Stocker.

St Saviour’s pupil Liberty and St Peter’s pupil Evie, who both also dance in London, have now opened a 2Stepz facebook page so they can keep in touch with everyone. 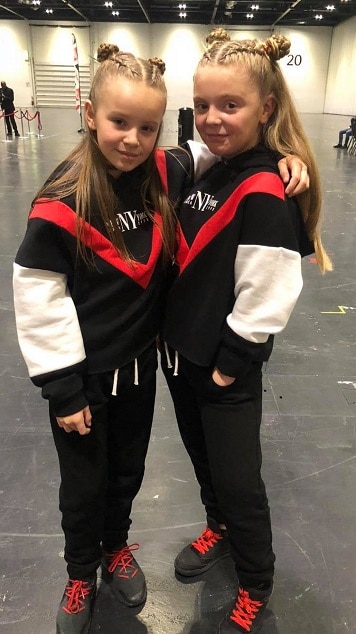 Michelle said: “We did not realise it would go this big but the girls are well-known dancers in the area and really good role models. We’d like to put it in Thanet schools as an education video, it has already been shared by Charles Dickens and featured in assemblies at St George’s.

“The messages we have received have been unbelievable, it is helping people and that’s what we wanted. The girls are so happy about that.”