Revellers in Margate were treated to an impromptu fire work display to celebrate the new year last night (December 31).

There were  no publicly organised events for the town  but members of the public put on their own shows.

One group had a small display set off on the Kings Steps by Turner Contemporary and a larger spectacle was carried out by a lone resident on Margate Main Sands.

Photographer John Horton was in town when the main sands display began.

He said: “What no-one expected was the sudden eruption of fireworks from out of the darkness that lit up the whole harbour and sands.

“ Ian, who is a resident, simply strolled onto the main sands and began working away quite undisturbed without drawing any attention to himself. Suddenly the sky lit up, mingled amongst other fireworks being let off in the celebrations along the Kings Steps. 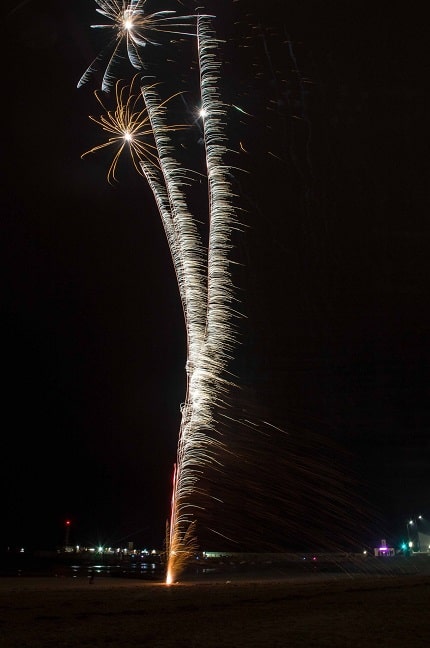 “Crowds suddenly began to appear, party revellers seemed to appreciate and enjoy the show, from the top of the Sands hotel, along Marine Parade, on the main sands itself and at the harbour arm,

“People gasped at the display, with the smaller fireworks complimenting the show. His work was appreciated, and the crowd cheered and applauded at the end.”

Ian removed all the spent firework from the beach after the show.

Ian said he was inspired to do his own show after the organised events on the Stone Pier were stopped.

Buying the fireworks himself he first tried a display on the main sands in 2016 – children and parents came up to him afterwards saying how much they enjoyed the show so he decided he would make it an annual event, with no advertising.

Ian said he enjoys bringing a bit to cheer to everyone at new year. Asked if he will be back for 2020 he simply said: “Come and see for yourself.”