Everybody knows you should be nice to new babies. After all, when you’re old you may need them to look after you.

A long time ago, in a far off land, a young couple had to leave their home and go off to another town to be counted – or some such silly reason that the rulers of the country had decided they needed to do in order to be extra nasty to the people they ruled over.

“Oh dear” said Mar to her husband Joe. “I’m about to have this baby so travelling is going to be really tough.”

“I’ll look after you,” said Joe. “We’ll take the donkey and lots of blankets and food and we’ll be ok.”

They had to get to the far off isle of Thanetlem, over the hills and right the other side of the country.

It took them two days and two nights, sleeping out on the hillside under their blankets.

But at last they got there. Mar was feeling very faint and had terrible cramps in her stomach. She was glad to be there so they could stop travelling for a while.

Just as they rode into the town they saw a group of women outside a large comfortable looking building.

Many of them were pregnant or holding small babies.

“This is the Thanetlem Motherternity Unit where women used go to have their babies,” said one of the women, “But it’s closed now. Governor Herold said it was because women would be better off going to the Ashfordhem Motherternity Unit over the other side of the mountain, but we think he was just trying to save money, the mean old so-and-so.”

“Nowhere!” was the answer, “Unless you have a lot of money! The Ashfordhem place is very expensive.”

Mar and Joe turned away wearily. They’d been hoping they’d be able to find somewhere for Mar to have the baby, but the town was full of people who were there to be counted and no-one was interested in a poor couple with just a donkey, and no money.

Mar clutched the donkey’s mane to help her along. They struggled through the whole town but there was nowhere to stay.

As they reached the edge of the town, where the fields started, they came to a very poor shack made of sticks and bits of canvass.

An old lady rushed out just as Mar collapsed to the ground.

“Come in my dears, you need help,” she shouted.

Her ‘house’ was like an old shed, no proper furniture and her animals shared it with her, so sheep were coming in and out at the back and her dog was very comfortable under the table. Bales of straw kept the place warm, but there was very little else.

She was one of the homeless people of Thanetlem — there used to be hardly any homeless people in the area but since Governor Herold stopped building homes to save money there were hundreds.

She took Mar and Joe to the back of the house where the straw was thick on the floor and they could spread their blankets and Mar could at last lie down.

The old woman, whose name was Kath, gave them a basket also filled with straw to put the baby in. Mar was definitely going to have the baby that night!

Kath brought food and the softest wool blanket she had made from her own sheep, and helped Mar all night as she had the baby. 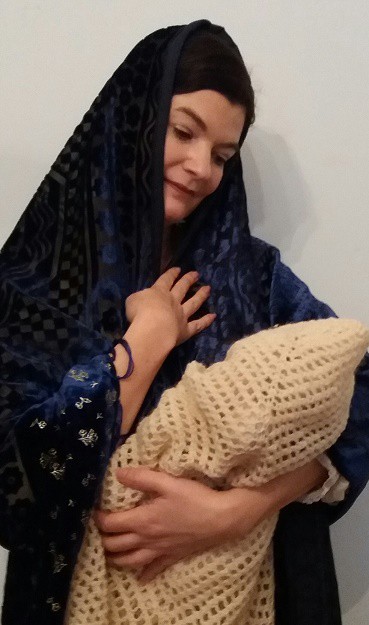 “A fine baby boy!” she announced to Joe as dawn was about to break.

They put the baby in the basket and thought what a lovely person Kath was – without her they would still have been in the cold fields.

Later that day something amazing happened. Lots of shepherds turned up looking for the new baby!

“How did you know where he was?” asked Mar.

“Kath told us – she waves flags from the top of the house and we come down from the hills when she needs help.”

They’d all brought food for Mar and Joe, and clothes for the baby, and sang gentle songs to lull him to sleep.

Kath was happy for them all to stay with her as long they needed to.

Mar and Joe went and got counted by Governor Herold’s officials and wondered yet again why they’d had to go on that long journey.

Kath said it was something to do with a new system called “Universal Benefits”.

This sounded good but it meant if you were ill or poor and you wanted some money from the government they would make life very, very difficult for you — for example by making you constantly move around the country to different places to be endlessly counted.

“Stay until the baby’s a few weeks old,” offered Kath, “He’ll be stronger then and the journey will be easier.”

But the danger was not yet over with. In fact it hadn’t really started. 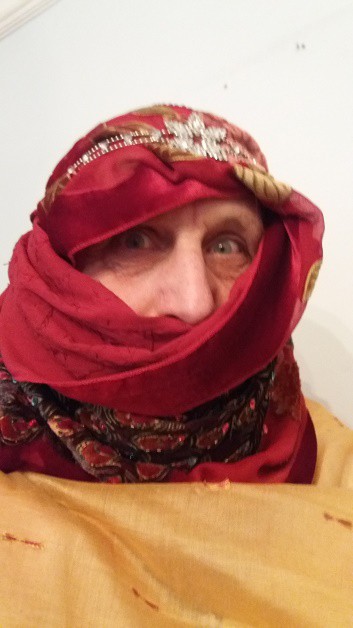 Three Queens, wearing crowns and silk robes appeared in the doorway of the shack one day and said they were looking for a new prince!

They were called Cass, Mel and Beth and they’d come a long way, from the city of Londondone.

Because they were from Londondone they seemed very exotic to the people of Thanetlem who called them Down From Londondoners or DFLs for short.

They’d studied the stars and consulted a lot of books and worked out that they needed to go to Thanetlem where a new baby had been born who was going to be a king!

They were also attracted by the extremely low property prices in Thanetlem.

There was a big new star in the sky – probably a comet – which they thought they should follow and they did.

They had read a lot of books predicting the future and thought they knew a lot of stuff, but they weren’t being very sensible. They thought Jes was the king that they were looking for!

“He’s just a little baby,” said Joe, “He’s not anything yet. Just because he was born under a particular star, doesn’t mean that’s what his future will be – anything could happen!”

But the queens thought they knew best, and since they had found Mar and Joe they thought they might as well treat this new baby as a prince anyhow.

But they also came with very bad news indeed.

Governor Herold had heard about the new baby prince as well, and he didn’t want to take any chances with somebody else setting up a government that he wasn’t in charge of.

He’d had a brilliant idea. He would seek out all the little boys born at the time of the big star and kill them! How horrible!

But Herold tried to sweeten the pill a bit by offering the first hundred families to give up their boys bonus credits on their universal benefits.

Kath was very upset and told all the shepherds what was going to happen. They were furious and decided to stir up all the people they knew to protect the baby boys.

The queens were furious too and since baby Jes was in the biggest danger they hatched up a scheme between them to save him.

“I’ll give you some nice baby clothes,” said Cass, the most thoughtful queen, “Girl’s clothes so he can pass as a little girl! No-one cares about girls and I’ll say he’s my daughter and Mar is his nanny.”

The queens gathered their horses and their camels and all their followers, and with Mar and Joe and Jes in their midst, they left Thanetlem.

Herold’s soldiers were all over the place looking for baby boys of the right age. But none of them dared question three glamorous DFL queens wearing their crowns and everything, and so they let them pass.

After a few days, they crossed the border of the country and felt a bit safer.

They heard terrible things from Thanetlem as the shepherds kept them in touch with what Herold was doing – which was seeking out small boys and slaughtering them if he could.

Fortunately, the soldiers who were supposed to do the job were very angry that they had to do something so horrible.

Collecting taxes and beating up people who didn’t pay was sort of OK, but killing babies was definitely not what they’d signed up for!

Most of them put their swords down and crept off back to their families, dyed their hair and changed their names and tried to forget the whole business.

Meantime the queens had enjoyed getting to know Mar and Joe and baby Jes.

Being people who’d lived in a posh part of Londondone all their lives, they’d never really met poor people before and were a bit astonished to find out they were really nice and just like them – only without all the silly ideas about stars and prophesies in books written by confused old men years ago.

“I don’t think I should be a queen!” said Mel, “I’m no brighter than Mar. I just had a richer family and a better education.”

“I’ve got a good idea!” said Cass, “let’s give everybody a chance to be queen. We’ll let the older people in the villages decide who they want and take it in turns so no one gets too many fancy ideas about being in charge and not listening to other people.”

“Are you including men as well?” asked Beth.

“Well, eventually,” said Cass. “We’ll try it out on young Jes. We’ll teach him to know a lot, like us, and learn how to be really nice to people.”

“And then,” said Mar, “we can go home and teach everybody else how to take to be nice to people and decide how to do things in a fair way.”

“Brilliant!” said Joe, who hadn’t really been listening as he was planning to make a really comfortable rocking chair for when Mar had her next baby.

Baby Jes just smiled and got on with enjoying his life. He was very pleased he didn’t have to be a king as he’d never liked the little crown he’d been given and had just chewed it to pieces, in a very symbolic way!