Ramsgate’s port and harbour finances will be considered by a new council committee.

The panel will hold its first meeting on December 12 where a decision will be made about the inclusion of external advisors.

The call for the panel followed the presentation of a 1,273 signature petition organised by the Ramsgate Action Group declaring a vote of no confidence in the council’s ability to run the port and harbour and demanding that Thanet District Council create an independent working party to investigate the losses and bring forward a comprehensive regeneration plan within six months..

The petition is in response to a £21million deficit since 2010. Losses include £5million in live export compensation paid after the High Court overruled a live export ban from the port put in place by the then-Labour led council and £3.4million for bankrupt TransEuropa Ferries unpaid fees and charges. 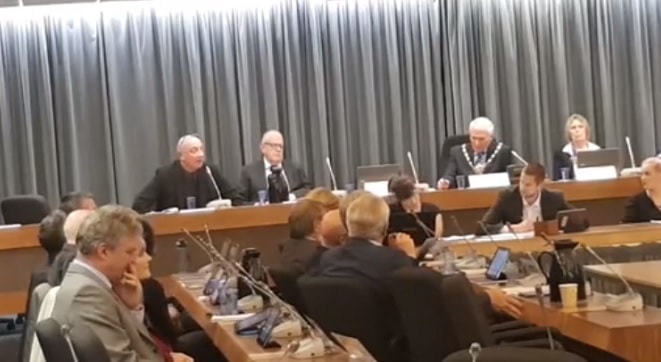 Speaking at a full council meeting on Thursday (December 6) RAG chairman Steve Coombes (pictured), who made reference to the council branding of him as a vexatious complainant, outlined booked losses of £2million a year at the port, concerns over the viability of discussions with Seaborne Freight for a Ramsgate/Ostend ferry service and derision at the claim Ramsgate could assist in the event of a no deal Brexit with 24 sailings a day from the port.

He added: “RAG believes councillors have a duty to your voters to put a stop to this. To insist on an open, transparent independent review of the port.”

Mr Coombes said a new port working party should not be serviced by senior council management but have access to independent experts.

His view was backed by Labour councillors Iris Johnston and Karen Constantine.

Council leader Bob Bayford, who came under fire from Cllr Constantine for criticising the number of petition signatories who were from outside of Thanet, confirmed a working party had been arranged.

He said the operation of the port was a priority and that talks were ongoing with Seaborne about the proposed  Ostend/Ramsgate ferry route.

Last October, during the run up to the Ostend elections, town mayor Mr Vande Lanotte announced a ‘basic agreement’ had been made for the ferry line between Ostend and Ramsgate.

The mooted March 1 start date came -and went- with no ferry service in evidence. No contract has been signed by Thanet council and there remains the question of which vessels could serve the route.

Only one vessel has been identified as being suitable for use the port – the former Dover-Calais ferry MS Nord Pas de Calais.

More recent reports from Belgium suggest negotiations for the route are not as far forward as previously stated.

Labour councillor Peter Campbell will be a member of the new working party. He said: “There has been a meeting set up for the working group on December 12. I am on it and this will jot be kicked into the long grass.

“We will form our terms of reference and there may be a place for external experts.”

Mr Coombes said if independent advice was sought the working party could be the beginning of a solution for the port. However, he said if it followed the example of previous committees it would not work.

Read here: Ramsgate Port finances meeting ends in confusion – with suggestion sale of the site could be ‘considered’