Neil Wakefield and Arek Janeczko returned to Wanderers pack and Peter Macaulay was at ten with Ryan Copp starting at outside centre replacing the injured Dan Hill. Jackson Perry was on Thanet’s bench where it was also good to see George Orton back after a couple of years away.

A muddy pitch and a largely wet breezy afternoon did not curb a lively start by the Wanderers, with an early Danny Clement special tackle setting the defensive tone. The Dover kicker gave warning of his ability with an early long range penalty but Wanderers were soon pressing at the other end. A good turnover and a big tackle from Stuart Plumridge followed by a nice positional penalty from Macaulay kept the Sharks penned.

Playing penalty advantage the Wanderers pack looked to have scored but the referee was unconvinced and went back for the penalty which was taken as a scrum. A further Dover infringement provided a testing penalty opportunity for Sam Rolfe who made no mistake to even things up at 3-3 after eighteen minutes.

Thanet’s forwards were playing with power and a driving maul was only halted by being pulled down near the line. Another scrum brought quick possession and Copp won the chase to touch down Macaulay’s precise kick through the advancing home side defence. Rolfe’s conversion made it 10-3 to Thanet. 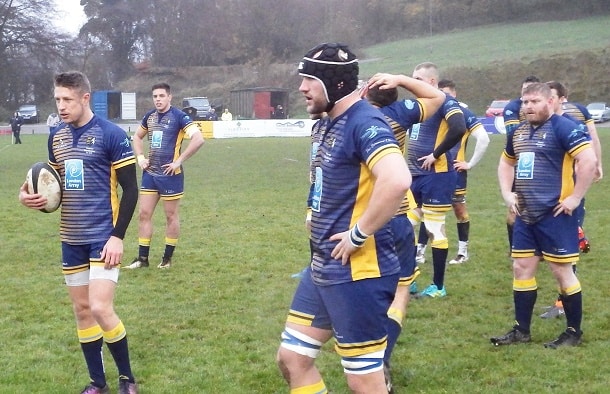 Wanderers pack continued to dominate and after a succession of penalties the referee went to his pocket and Dover were down to fourteen players. Again Wanderers wisely opted for a scrum and were unstoppable as they powered over and No 8 Andy Letts scored his first try of the season. Rolfe’s difficult conversion sailed over for a 17-3 lead but Wanderers were soon back threatening the home line.

Charlie Knight’s fine break was halted but Thanet’s pack took advantage of the attacking position to again power over and give lock forward Arek his fifth try of the season. Rolfe converted to make it 24-3. Dover raised their game and after prolonged pressure on Wanderers line went over for an unconverted try to make the half time score 24-8.

The Dover side were now playing with the advantage of the elements and were quick to build on a missed touch from a Wanderers penalty when the wind blew the ball back into play. Plumridge made a fine break but the home side crossed under the posts after ten minutes of the half to reduce the deficit to 24-15. David Lemon had put in a super shift and now took a break with Toby Rayleigh-Strutt seamlessly replacing him in the back row.  Captain Adam Gaddes made a great saving tackle and minutes later Orton was back in Thanet colours replacing Arek who had played an important part in Wanderers first half dominance.

As Dover pressed the Wanderers defence was tremendous and finally a knock on and a good scrum allowed the clearance to near half way.  Thanet were playing sensible rugby keeping possession in the forwards and with Macaulay’s boot setting good field position. Andy Letts picked up and broke deep, Tom Walton was brilliant around the scrum and Reece Hougham made a fine chase to catch and contain the Dover catcher.

Thanet won a penalty at a break-down and when Dover offended at the subsequent line-out, up stepped Rolfe and from widish left his penalty was good for a 27-15 lead with seven minutes remaining. Wanderers open side Sam Taylor had been immense in Wanderers defence and his fitness now stood him in good stead as he repelled attack after attack. The clock was running down as Dover secured a third try that was not converted and after the final moments Wanderers could celebrate a notable victory by 27-20.

Many will agree with Thanet Wanderers president Peter Dickinson that the win was founded on the efforts of Thanet’s front row of Clement, Kamil Wiecaszek, and Wakefield who were terrific, showing superior technique throughout and being integral to Thanet’s defence. However Head Coach Mike Pond’s choice of man of the match was Andy Letts who gave a master class in No 8 play and even put in a short shift in the front row at the end of the match. The biggest smile in Thanet ranks belonged to Neil Wakefield who endured the good natured banter of the Dover crowd, a club he had played in the past, to run out a winner today.

Results elsewhere mean that the win moves Thanet up the table ahead of Maidstone into ninth place. Next Saturday, December 8, Haywards Heath in seventh place are the visitors to St Peters. The game will kick off at 2pm.