The A254, which runs as the Margate Road and the Ramsgate Road between the two towns, has been named as the most “persistently highest risk road” in the country.

According to insurance firm Ageas, which has produced a dangerous roads map in partnership with the Road Safety Foundation, the stretch -which runs through Westwood – has worsened over the last three years with an average of seven fatal and serious crashes each year. A third of these involved a motorcyclist, almost half were at junctions, and almost as many involved pedestrians or cyclists. 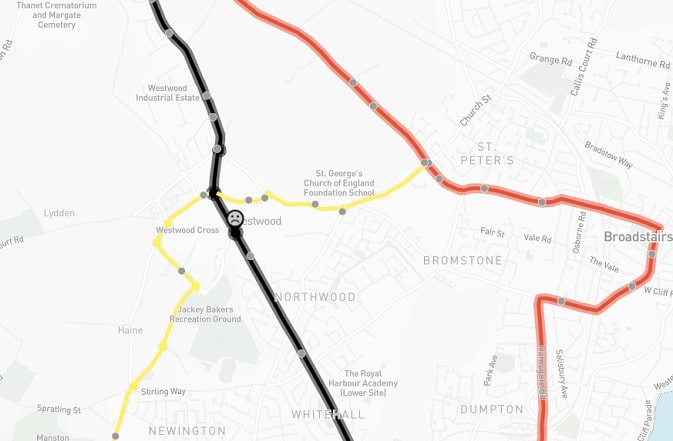 The report by Ageas says there have been 21 serious or fatal crashes on the stretch between 2014-2016- 33% involving motorbikes, 43% pedestrians and cyclists and 10% rear end shunts. Some 48% were at junctions.

On average, 73 people were killed or seriously injured every day on Britain’s roads last year.

Ageas says since 2011 there has been little improvement in reducing the number road deaths. If Britain had kept up with international targets, 2,549 deaths could have been avoided between 2010 and 2017.

The government put in place £100 million in 2016 to upgrade 50 of England’s most dangerous local A-road sections, and the money is expected to prevent 1,450 fatal and serious injuries over the next 20 years. But road safety campaigners say more money is now needed.

Aeeas says: “A single investment of £75 million on these roads is urgently needed and would prevent an estimated 1,100 fatal and serious injuries over the next two decades. That would then need to be followed by £75 million each year for the following five years.”