Members of Save Our NHS in Kent gathered with placards to present research to the MP as part of their fight to retain services, including immediate stroke treatment and the accident and emergency department, at Margate’s QEQM Hospital.

Campaigners say the action was in a bid to change Sir Roger’s stance on plans for a Hyper-Acute stroke unit at William Harvey Hospital in Ashford – meaning the emergency service will be removed from Thanet. 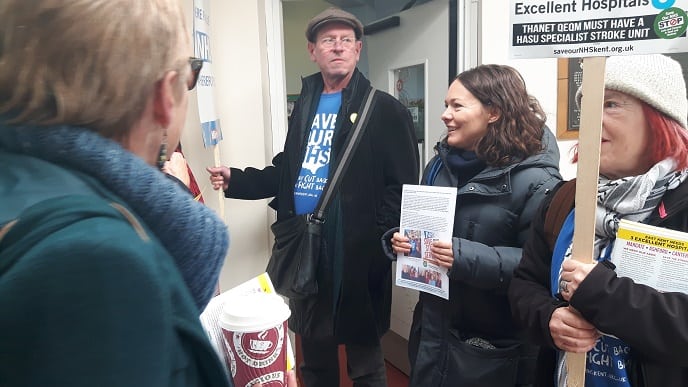 Stroke rehabilitation services will remain at local hospitals with patients taken to Ashford in an emergency being returned to QEQM, Deal, Herne Bay or Canterbury for follow up treatment.

But campaigners say the one hour journey to Ashford is too long and could have life-changing or threatening outcomes. They want an option for a fourth unit to be sited at QEQM.

Sir Roger spoke to campaigner Pauline Farrance, who had made an appointment, but berated campaigners for singing and chanting in the library reception area.

Breaking off his talk with Pauline he told protesters he would not have his surgery “turned into a circus.”

SONIK members had asked to be included in the meeting with Pauline but were refused.

Campaigner Cameron Dougherty spoke to the MP before the demonstration. He said: “He told me he has made his decision based on the evidence from the CCGs. He said he supported the hyper-acute proposals and said he had been assured that anyone taken to Ashford would be returned to their local hospital within a period of two days for rehabilitation.

SONIK spokesperson Carly Jeffrey said: “Roger Gale should be representing his constituents; the majority of those constituents do not support the loss of the stroke unit from QEQM.

“We do not think he fully understands the proposals and we want to present briefing documents to him. There is not much time left but we need to make him change his mind. There is no evidence that centralisation improves services and if it is not improving it then there is no reason for the plan.

“If the real reason is staff shortages then it should be billed as that.”

Pauline said during their discussion the MP stood firm on his stance over hyper-acute units and said the ambulance service did have issues but was now likely to improve under a new chief executive.

Sir Roger did however voice his support for keeping A&E at Margate, saying he did not believe a plan to build a new hospital in Canterbury would happen. 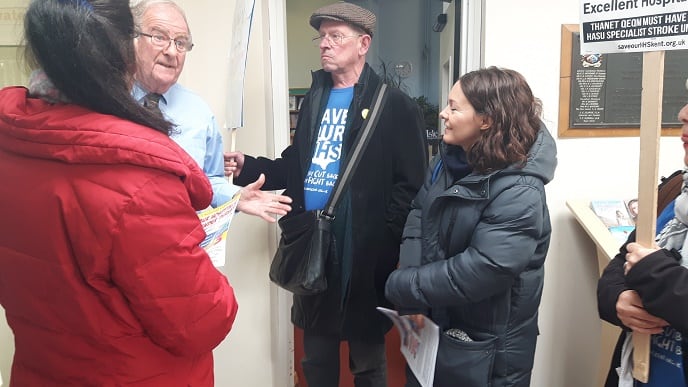 Kent and Medway NHS commissioners are also currently holding ‘listening events’ to share with the public proposals for changes to services including A&E, maternity and children’s inpatient care.

Two options have been put forward:

Option 1: Ashford will have a specialist A&E, and full maternity care. QEQM will retain an A&E unit, but it will have fewer services than it does now. QEQM will lose consultant-led maternity care as will Canterbury, meaning that women giving birth who are having complications may need to be transferred to Ashford. Canterbury will continue to have a GP-led Urgent Treatment Centre which was put in place after A&E was removed from the site.

SONIK is campaigning for A&E at all three hospitals and a new petition has gained more than 1,200 signatures so far.

Sir Roger said the assessment of his conversation with Cameron was “fair.” Although the MP had originally suggested looking at the option for a fourth unit he recently said: “I believe that the distribution of all health services should be made on the basis of sound medical judgement and not upon emotion or party-political interest.

“I have discussed the location of services with those who are expert in the subject on a number of occasions and I am satisfied that, given the planned safeguards, the decision taken and based upon three Centres of Excellence is the best practicable solution to provide the best patient survival and recovery rates – and that is what matters.”

Following the library protest campaigners moved on to Birchington to collect petition signatures and hand out leaflets.