The Black 5 loco is now being stored at Westwood after arriving this afternoon (November 1).

The Black 5 45379 is the fourth ‘exhibit’ to be stored at Locomotive Storage Ltd – the former Hornby factory site after travelling from Mid Hants.

The loco was built in 1937 by Armstrong Whitworth of Newcastle upon Tyne and given the number 5379.

On January 1, 1948 British Railways was launched. At this time the loco was shedded at Rugby and renumbered to 45379, one of the members of the Class 5, more commonly known as “Black 5s.” These were the workhorses of the railway.

The loco was last shedded at Willesden, London, where it was withdrawn from active service and then towed away to South Wales for scrap in 1965. 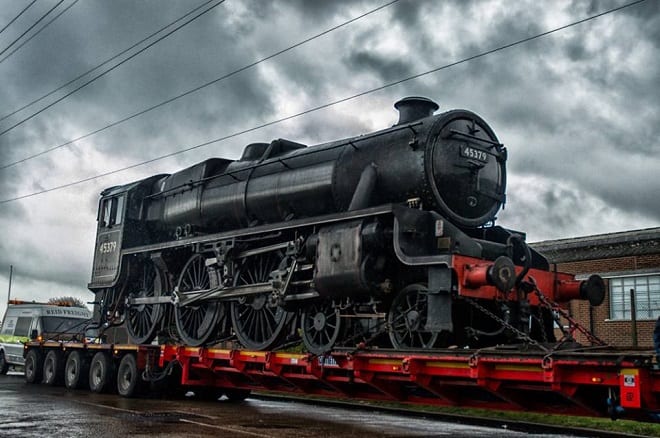 It remained there until purchased in 1974 and taken to the Avon Railway and then onwards to the Great Central Railway.

The locomotive was then bought by The MId Hants Railway Preservation Society and moved to the Mid Hants Railway where it underwent a total rebuild and return to active service on their preserved line in 2010.

A boiler certificate was granted in 2008, two years before its return to but in September this year, the certificate expired necessitating a full overhaul. 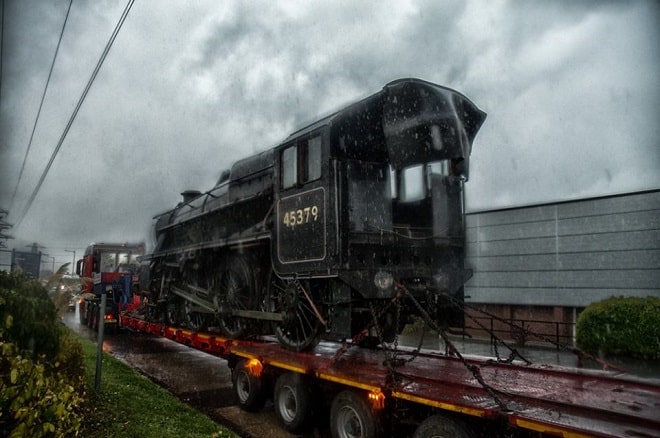 To keep it safe from the elements a decision was made to move the locomotive to Westwood where it will remain undercover, until such time that the work required to be undertaken can be given the go ahead.

The main warehouse has been converted with seven railway tracks laid in the warehouse and access loading docks to facilitate the unloading and loading of locomotives and carriages. It is expected that up to 30 items of rolling stock will  be housed there for eventual public display.

Report and photos by John Horton