This year Remembrance will mark the milestone of 100 years since the end of the First World War.

Armistice Day is commemorated each year when people wear paper poppies to remember those who fought and died in conflicts around the world – the red flowers were the only life to flourish on the bloody battlefields of Western Europe.

It was hoped the Great War would be the conflict to end all wars. Just 21 years later World War Two broke out.

Thanet will mark the centenary with a number of events and Remembrance services.

Wreath laying ceremony at the Destiny statue in Albion Gardens. This will be followed by the Remembrance day parade starting in Elms Avenue at 10.40am marching via Queen Street, King Street & Broad Street to St George’s Church in Church Hill where there will be a service.

Thursday, November 1, from 10am

The Crafty Poppies group will install 8000 crocheted poppies along the railings and around the Destiny statue in Albion Gardens.

Animals in War Memorial, weather permitting, at Albion Gardens. Please bring purple flowers and wreaths for the animals. There will be white and purple poppies on sale at this event. All monies collected at stalls and Animals in War memorial will be going to Guardian Angels Dog Rescue, Thanet

The Last 100 Days of World War One at

An interesting, illustrated talk by Melanie Gibson-Barton -From Paeschendale to Peace.

Tickets £7. Refreshments during the interval, which will be followed by World War One popular songs.

There will be a small exhibition in the Church of World War One artefacts and information about the effects  the conflict had on St Lawrence.

At 11.30am there will be a tour of the war memorials and war graves in the church and churchyard

Act of Remembrance  service at St Laurence War Memorial. At 7.05pm the  ringing of the church bells will take place as part of national Ring out for Peace event.

The Royal British Legion leads a Festival of Remembrance with the Band of the Brigade of Gurkhas and the Parade of Service Representatives and Standards.

The festival is an opportunity to pause and reflect on the sacrifices made by our brave service men and women and remember all those who have given their lives for the peace and freedom we enjoy today.

The festival is the largest in the country apart from the Albert Hall event. Terry Whittles, the national Chairman of the RBL, will be guest of honour. There will also be a singalong session and music for dancing.

The civic mayor’s procession along Northdown Road to the memorial followed by wreath laying. In the evening, the Margate beacon on Fort Hill will be lit at 7p. and the Mayor and Charter Trustees will process to Fort Hill led by a piper. The trustees are also making arrangements for a short fund-raising event to follow the beacon lighting.

Events will start at the Memorial Recreation Ground 1914-1918 (commonly known as the Memorial Ground) in Broadstairs on Saturday, November 10, with a living history exhibit of life during 1914-1918. This exhibit will give a glimpse into the home front and beyond giving specific detail to events in Broadstairs and St Peters.

Local schools, dance companies, inclusive choirs, theatre groups and local musicians, will work side by side to bring the Poppy Proms in the Park to life. Stories from the home front and beyond will be told using acting, dance, song and music.

On Sunday, November 11 the Remembrance Day service will be held by the war memorial in town with all groups attending invited to join a reprise of the Poppy Proms at the Memorial Ground and visit the Living History exhibit, which will be open until 3pm.

Gadds’ Warhorse beer will be available at the event, alongside other food and drink.

The event will be free, but tickets will be required for the collaborative evening on the Saturday and the reprise on the Sunday.

The Poppy Proms event has been organised by Bradstow School.

People are asked to arrive at 6.45pm for the lighting at 7pm.

Readings to raise funds for Help for Heroes from residents including Melissa and Steven Todd, Janet and Jane Pitt, Stephen and Jane Skinner, Lester Hovenden and Bob Brown.

This event is supported by MPC, KCC and RBL

Parade forms up at 11.30am outside St Saviour’s Church, leaving at 11.45am and heading to the war memorial in Sea Road. Service followed by refreshments at Christ Church United Reformed Church in Westgate Bay Avenue.

The Beacon will be lit at 7pm. Refreshments available from Millie’s Beach Bar

Poem recital and a short service led by Reverend Kalu.

Birchington’s parade is organised by Birchington British Legion. Meet at Alpha rRoad car park from 10.30am for the parade through the village to The Square for the wreath laying service at 11am. Following this will be the Remembrance Service at All Saints Church.

This is followed by the Beacon Lighting at Epple Bay from 6.30pm. There will be a performance by the Birchington Silver Band with the beacon lighting at 7pm,

A display of poppies created out of used plastic bottles will be unveiled at Westwood Cross to mark the 100th anniversary of the end of World War One.

Westwood Cross has been working with Thanet artist Sioux Peto to create a stunning community art installation consisting of hundreds of the handmade poppies. The Westwood Cross Poppy Project has more than 500 poppies created so far in special workshops with groups including East Kent Mencap, The Gap Project, Minster Church of England Primary School and 1st St Lawrence Scout Group as well as individuals, staff and children during half the October half term.

The display will be unveiled as part of a Remembrance procession on Saturday (November 10) at 10am. Everyone is invited to join the procession at the Viking Ship Sundial, near Next at Westwood Cross. The procession will then make its way to the Memorial Wall where the Minster Church of England School choir will perform and a short service will take place.

Also attending the event will be representatives from the Royal Air Force, Army and Sea Cadets. A variety of vintage military vehicles will be on display with members of a local re-enactment group dressing in vintage style clothing. Armed Forces charity, SSAFA will be in attendance, joined by current and ex-service men and women to pay their respects.

Thirteen sitting soldier silhouettes. 12 represent the 440 service personnel killed and 1 represents the 18 civilians killed either by bombs or the ammunition factory accident at Faversham.

The First is the story of Rev David Railton, Vicar of St Johns Church Margate 1920 to 1925. He is the man responsible the creation of the Tomb of The Unknown Warrior in Westminster Abbey.

The second is to commemorate the Armistice on 11th November 1918 and the remembrance of the 444 Service personnel and 18 Civilians who lost their lives during the conflict.

This exhibition called “There But Not There” includes the Perspex cut outs which represent the Service personnel and two civilians,

One story uncovered includes a bombing run by a German seaplane . On March 1, 1916 a seaplane flew over Cliftonville and dropped a bomb on 5 Norfolk Road. The bomb fell through the roof and exploded on the nursery where Jack Wepstour Dodman lay in his crib. He was killed instantly as he slept. He was only 9 months old. 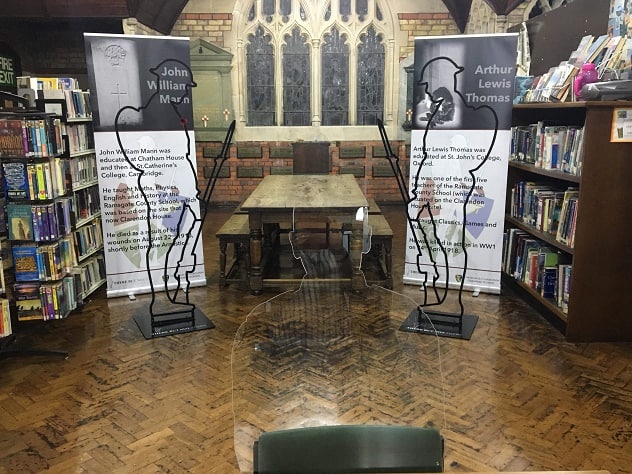 The 100 years since the end of the Great War is also being marked by staff and pupils at Chatham and Clarendon Grammar School.

It is also 100 years since the deaths, during the conflict, of Arthur Lewis Thomas (24th April 1918) and John William Mann (22nd August 1918). Both men taught at the Ramsgate County School (RCS) a forerunner of today’s grammar school. Houses Mann Somerville (MS) and Thomas Sharman (TS) are named in their memory.

Dr Tebutt (former Head of Thomas’) and  Mr Ferguson (Head of Mann Somerville) will be journeying in April to France to visit the Somme Pozieres Memorial where there is an inscription for Thomas and the Franviller Communal Cemetery Extension where Mann rests to lay wreaths in their honour on behalf of the school.

The book of remembrance, which is kept in the Chatham site library, includes the names of 14 more students/teachers who gave their lives between 1914 and 1918.

The charity Remembered inspired the school to commemorate their own history by joining in their project to bring the names of the fallen out of the pages of a book and amongst us.

To mark this the school has installed two life sized sculptures based on the Tommy silhouette to represent their fallen. 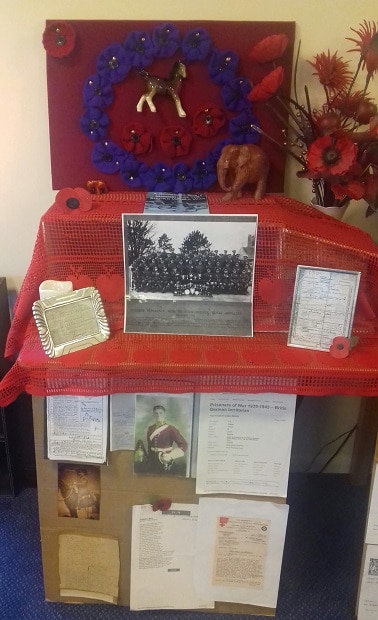 Residents at Pembroke Court in Ramsgate have created a display of poppies for the men and animals that died during both wars.

The residents will be holding their own Remembrance service on Sunday at 11am.

Teams in the Sunday league due to kick off at 10.30am will hold one minute’s silence before the start of games. Some teams had requested an 11.05am start so the silence could be held at the 11th hour of the 11th day on the 11th month but have been told this is not possible despite teams in Ashford, Dover and Maidstone changing their kick off.

Teams say they may still stop when the cannons are fired at 11am.