An intimate offering for Thanet foodies has been launched with a Supper Club at the Little Ships restaurant in Ramsgate.

The seafront venue – formerly Miles Bar until hotelier James Thomas and chef Craig Mather took the reins earlier this year – is offering a three course menu for the price of two every Sunday and Monday between 5.30pm and 9.30pm.

The new addition comes after a busy Summer feeding hoardes of tourists. With a slightly calmer Autumn upon us the pair, who also head up the Empire Room restaurant at the Royal Harbour Hotel in Ramsgate, say it is time to give something special to residents.

Craig said: “Summer has been incredibly busy – we had to recruit more people and give staff extra shifts to cope. Now Autumn has arrived and things have calmed down, we can focus on a more intimate offering for our regular local customers – hence the new Supper Club, which brings high quality and great value to an area where most other local restaurants are closed on Sunday and Monday evenings.” 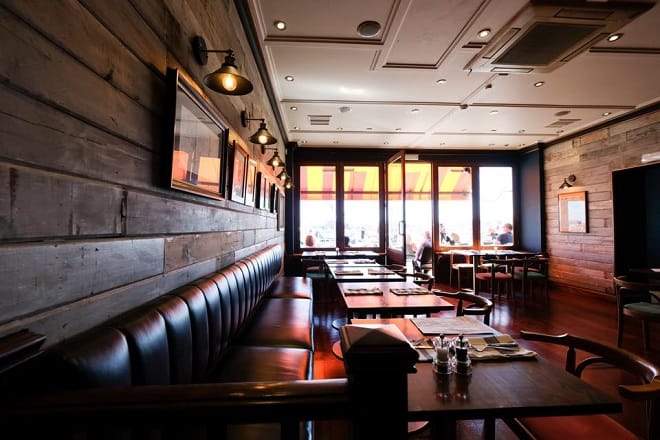 Michelin-trained chef Craig has created a menu with a choice of four starters, six mains and five deserts, with vegetarian, vegan and free-from options. 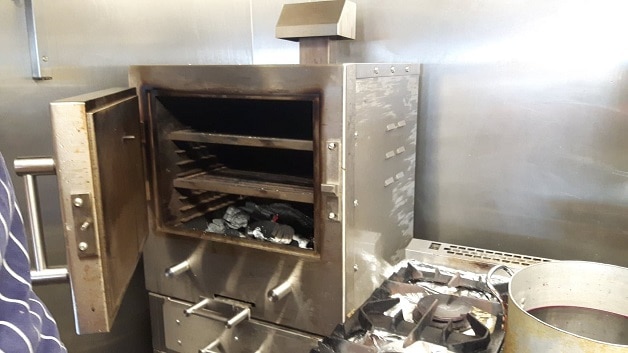 These are cooked quickly at very high temperatures, in the new open kitchen, using a locally-made Harrison charcoal-fuelled oven. Favoured by chefs in several Michelin-starred restaurants, the versatile oven can be employed for differing cooking techniques bringing unique flavours.

We made a visit to the restyled 80-seater venue to test out the new club menu.

For starters we plumped for the warm, home-made scotch egg with bacon jam and rocket.

Judging by the rich colour of the yolk I’d imagine the eggs come from free-range hens and not, thankfully, from a bird caged in some dark battery farm. 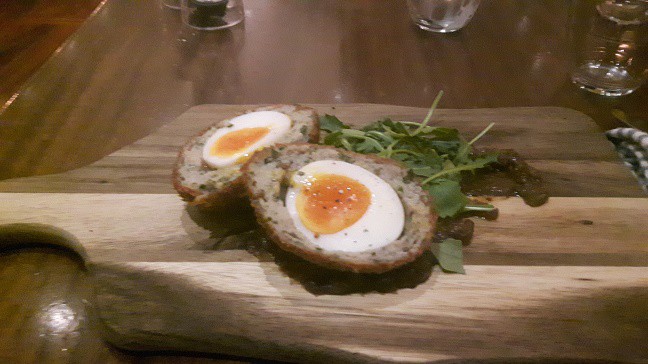 The bacon jam was tasty and, despite my fears, the dish was not at all heavy.

First off, those chops are huge! They come from Hogman Family Butchers in Broadstairs and are definitely top quality. 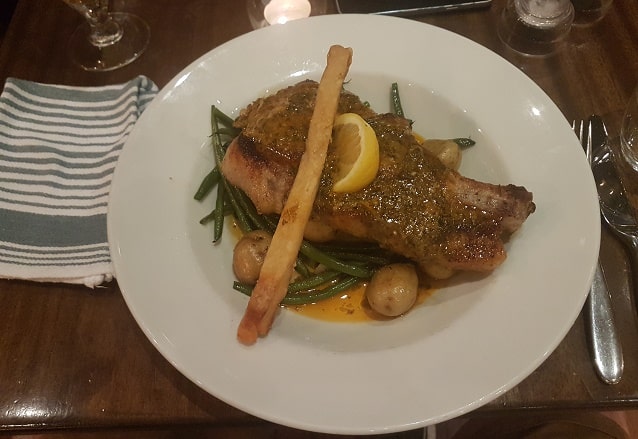 The Café de Paris butter, with herbs, was delicious enough to make me wish I had a slice of bread to mop it up with (if I had been at home that bread would definitely  have been wiping around that plate) and the potatoes and beans were great too.

There was still a tiny space left for dessert so we went with the rich Belgian chocolate pot, crème fraiche and crushed cookies. There was also a blackcurrant conserve, with fruit, in the mix and it was beautifully rich and smooth without being overwhelming. 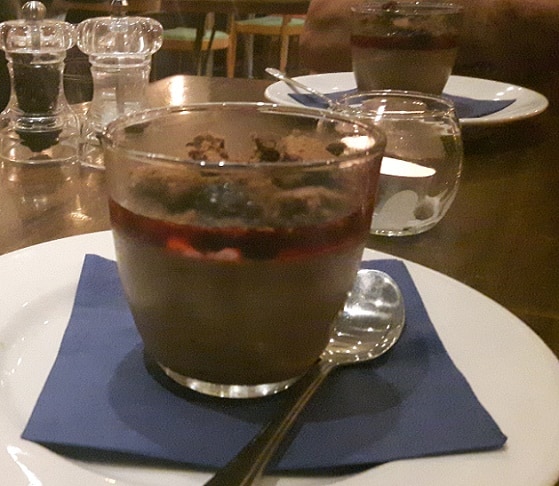 Just a note – there is a really good lager on offer, brewed by The Curious Brewery in Ashford. It is lager re-fermented with Champagne yeast giving it a really good, hoppy taste. If you like real ales I’d recommend giving it a go.

The Little Ships offers top quality local, seasonal produce. Most of the ingredients are sourced from nearby Kent farms and artisan producers with some products from Belgium and Northern France.

Owner James says creating restaurants as well as bars on Ramsgate seafront can only be good for trade for everyone.

With the Little Ships, and A La Turka, and the Custom House at the other end of the strip alongside the Green Tara and Royal Victoria Pavilion, it means there is a wide variety on offer.

James added: “Despite some negativity surrounding the opening of the JD Wetherspoon’s mega pub on the Royal Harbour, we’ve shown that with the right offering, there’s plenty of custom for everyone.”

When and how much

The Little Ships, which is open all day from 8:30am, seven days a week. Find it at 54-56 Harbour Parade, Ramsgate