Last month, on September 15, there was a fire in Thanet. It was all over the news. It happened on a very busy Saturday, and has raised as many questions as it has presented issues. Today, finally, it has been put out.

I woke up earlier than usual that day. Sirens were screaming across the early autumn sky, blending into a cacophony of wails. It was a dawn chorus, much like the seagulls and starlings and sparrows, but of a different sound.

That Saturday I was due to be Poet-in-Residence for Margate Festival for the day, setting up camp in Cliffs on Northdown Road with a typewriter twice as old as me and a brief of spending the day just writing poetry. Now, I appreciate that me drinking coffee and writing (which is what I do a lot of the time) is hardly of importance when compared to a fire that lasted 25 days, but it meant that I had an entire day to think about what was going on around me, what took place on that day, and channel it into words.

Normally, when I write an opinion column, I like to look at a few topics together: issues, events, local points of discussion, things people care about, art, culture, and so on. I base my column on what has happened to me over the past month, what conversations I have had, what I have seen, and what I think will be interesting over the next month. For this column, however, I am going to look at that single day: Saturday, September 15. 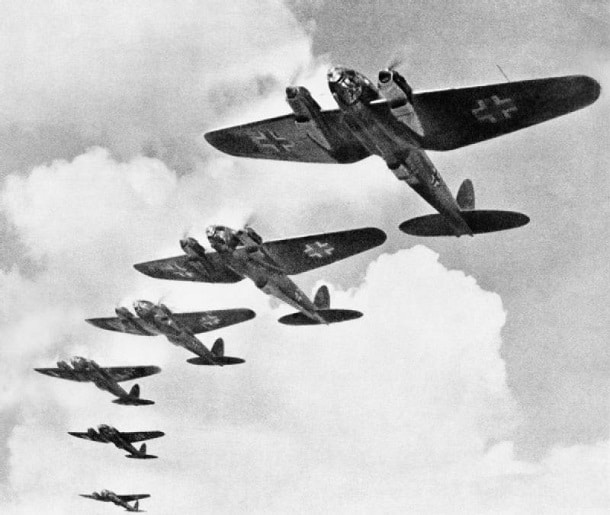 September 15 was, amongst other things, Battle of Britain day. It was a day to remember the pilots and ground crews who were involved in the large-scale aerial battle that took place in 1940 across the south of England, Thanet included. During the battle, RAF Manston was heavily bombed, resulting in both wide-scale destruction and a lot of unexploded bombs. Staff were relocated to nearby woodland for over a week whilst bomb disposal took place. In a way, this year was particularly poignant as, in April, it was the centenary of the formation of the RAF.

After hearing all the sirens that morning, I looked outside and saw the devastating tower of smoke. It almost looked like the sky had grown angry and gathered itself into a giant black and grey cloud that was reaching down to the earth. If only that had been the direction the smoke was heading; instead plastic ash and toxic gases plumed into the atmosphere, hovering above in smog.

It was also the tenth International Day of Democracy that Saturday, marking a decade of promoting and upholding the principles of democracy by UN member states. This year is also the 70th anniversary of the Universal Declaration of Human Rights. Both should be lauded, yet somehow felt muted over the past few years on the international stage. September 15 was an important day, then, to remind us that we all have a voice and a part in the decisions made in Britain, whether we agree with the eventual outcomes or not.

I drove along St. Peter’s Road that morning, looking across the fields to the cause of the inferno. I didn’t want to drive closer as I did not want to contribute to traffic that may block emergency services. Even from where I was, though, the air reeked and, in places, it was difficult to see. All I could hear was sirens.

In addition, September 15 was World Lymphoma Awareness Day; a worthy cause if ever there was one. Although an increasingly common form of cancer, lymphoma is not entirely common knowledge, and so raising awareness is most definitely needed.

Arriving at Cliffs—my residency for the day—I checked the news. There was a lot of information, and Kent Fire & Rescue had said there were 70 firefighters, 12 engines, and a specialist rescue team on site, and a drone in the air. It’s strange, the sense of helplessness in a situation like that. On the one hand, I wished I could do something to help. On the other, I have no training and would get in the way, and should absolutely stay well away from the area and let the professionals do their jobs. I could have tried to take a look, using press credentials, but that would have felt voyeuristic. Instead, I did what everyone else was doing: trusted Kent Fire & Rescue to do what they do best. So, I got a coffee and began writing.

Other notable happenings on September 15 included: the birthdays of Prince Harry, Tom Hardy, Sophie Dahl, Jimmy Carr, and Tommy Lee Jones; a year since the death of legendary actor Harry Dean Stanton; the anniversaries of the Battle of Signal Hill in 1762, Arthur Wellesley’s first engagement in combat in 1794, the opening of the Liverpool to Manchester railway in 1830, Charles Darwin arriving at the Galápagos Islands in 1835, the first use of a tank in war at the Battle of the Somme in 1916, the adoption of a new flag featuring a swastika by Nazi Germany in 1935, the day Roosevelt met Churchill to discuss strategy in 1944, the launch of the Zond 5 Soviet spaceship which became the first craft to fly around the Moon and re-enter the Earth’s atmosphere in 1968, the first Greenpeace ship setting sail in 1971, Muhammed Ali winning the World Heavyweight title for the third time in 1978 and becoming the only boxer ever to do so, and the Cassini–Huygens probe being retired after a twenty year mission to visit Saturn in 2017. It was, in every sense of the word, a busy day. 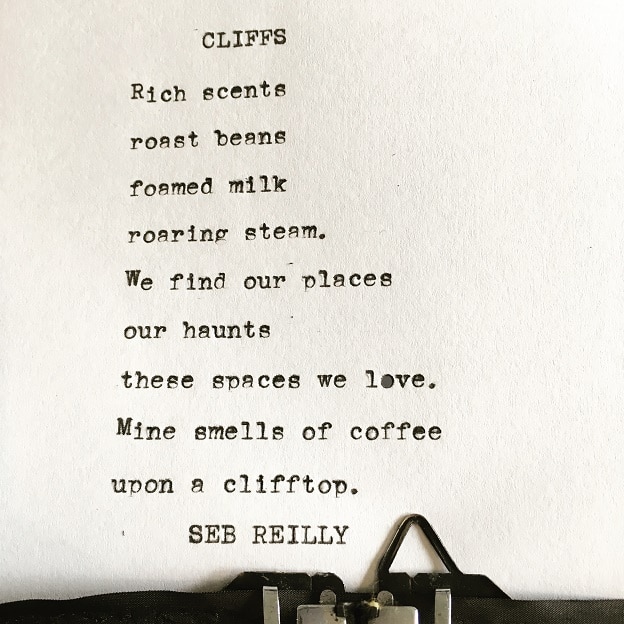 I came up with a lot as Poet-in-Residence, including responses to some of the art installations that were part of Margate Festival, musings based on what was happening in Cliffs, little observational things, some abstract big-picture poetry about regeneration in the area, and even wrote a piece for the place where I was based. Somehow, the raging fire and pillar of smoke also permeated my writing, subtly weaving into what I was coming up with. I didn’t intend that, nor did I wish to trivialise the fire; it just happened.

Now, I must say, it was a fantastic experience to sit and have no other motivations except to write. I owe a huge thanks to the staff and owners at Cliffs who kept me well-stocked with coffee throughout the day, and were incredibly hospitable, as always.

Part of the day I spent considering the local writing scene, as—and this is absolutely a good thing—there are a lot of authors and poets around these parts now. Writers were an integral part of Margate Festival this year, along with the numerous artists and their captivating installations and exhibitions. The final festival weekend would then coincide with the autumnal Margate Bookie, where even more writers would descend en masse to Margate, and I would buy far too many books from the Margate Bookshop—a wonderful bookshop that sells a fantastic range of books, including one containing words that I wrote—which has a pop-up store at Turner Contemporary during the Bookie.

I was also listening to those around me. I absorbed a mixture of banal and deep conversation as I eavesdropped on the nearby tables and those being served or queuing.

Most of my time, though, was spent considering how I could help with the fire. What could I do? How best for a writer to recognise Battle of Britain Day, or promote International Day of Democracy, or draw attention to World Lymphoma Awareness Day, or thank the firefighters? The answer is this: I could write about it.

To those who fought the fire, who tirelessly worked to bring it under control on the day and the following week, and put it out over the past 25 days, we as an Isle are grateful. We thank you. We appreciate you. What you have dealt with is staggering. We are in awe.

Saturday, September 15 was many things. It was a day to remember those who fought for our freedom, those who continue to fight for the freedom of all people, and those who are fighting nature itself to save others. To us all, it was a reminder of the essential work Kent Fire & Rescue do and their selflessness in keeping the rest of us from harm.