Seventeen poets, seventeen days, one typewriter. That was the pitch isle wordsmith Connor Sansby presented to the up-coming Margate Festival for a Poet-in-Residence scheme that has brought together poets, businesses, and funders from across Margate and beyond.

The scheme will run throughout the festival, from September 14-30, and each day there will be a different Poet-in-Residence. The venues hosting these poets vary from cafes and bars to visitor attractions and even outdoor locations, finishing with three days at the Margate Bookie festival.

“The residencies make poets and poetry accessible to all; you’ll find them in venues across town writing about their surroundings, from the Shell Grotto to Clayspace and many cafes and bars in between.”

The poets will report on and document their environments – and their reactions to them – as they are inspired by the sights and sounds of locations that have taken part in Margate’s current cultural renaissance. 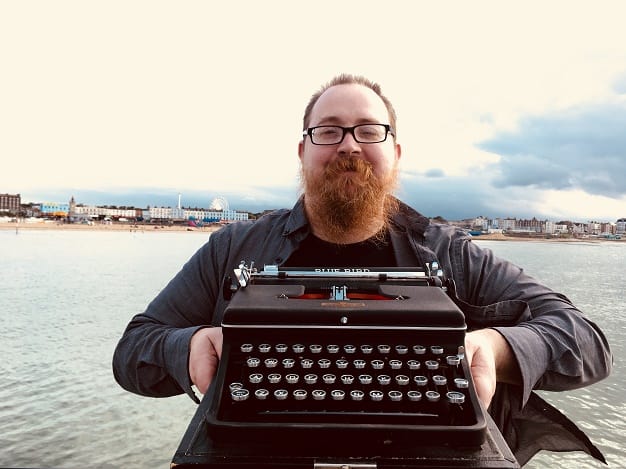 Connor said: “I think poetry and poets should come to people instead of waiting to be discovered.”

Connor is Editor-in-Chief of Whisky & Beards Publishing, a Margate-based micro-publisher specialising in poetry. He is also the poetry editor for local community organisation and non-profit publisher Thanet Writers and runs  and hosts Tongue Punch – a monthly poetry night at the Tom Thumb Theatre.

Each of the 17 poets taking up a residency for the day will use the same 1952 Blue Bird Torpedo typewriter, which has been acquired especially for this year’s Margate Festival. Poets will create new poems, some of which will be given away for free to members of the public.

The Margate Festival has events at over 30 venues throughout the town. As welol as the poets-in-residence there will be sound  installations, exhibitions, unexpected signs, projection, performance, workshops, print,  poetry, drama, photography, painting, walks, tours, video and film screenings, shared food and experiences.

The poets – and where to find them

September 17: Joshua Cialis at The BottleShop