Hundreds of campaigners turned out today (October 6) to protest at plans close the stroke unit at Margate’s QEQM and move it to Ashford.

The demo at the hospital entrance on Ramsgate Road today (October 6) was in protest at a decision by NHS bosses to opt for three hyper-acute stroke units in Kent and Medway — with the nearest one to Thanet being at William Harvey Hospital in Ashford. 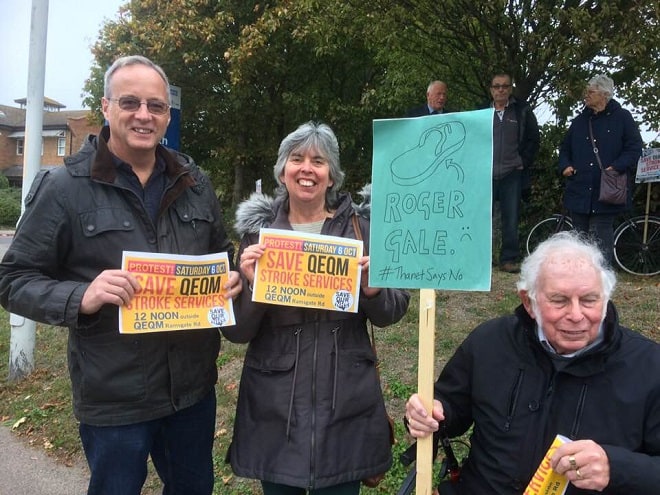 The NHS in Kent and Medway – which includes all 8 Clinical Commissioning Groups – Bexley in south east London and the High Weald area of East Sussex, drew up a shortlist of five options and announced Darent Valley Hospital, Maidstone Hospital and William Harvey Hospital as preferred options for the specialist units. 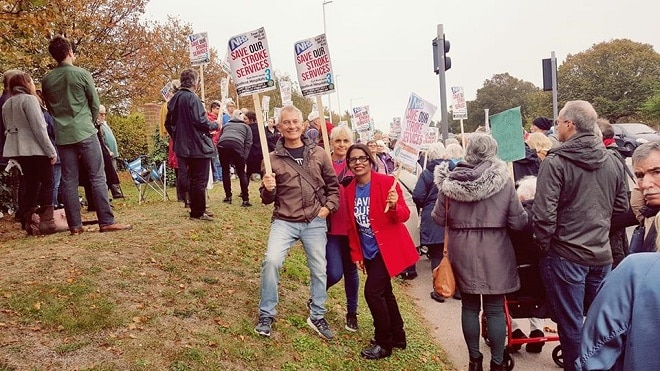 Campaigners say studies on hyper-acute units were based on London where no patient had to travel more than 30 minutes to reach a unit. They say the one hour plus journey time to Ashford from Thanet could put lives at risk.

The campaigners, who also marched from the hospital to Margate’s Old Town, were addressed by several speakers, including Carly Jeffrey and Helen Whitehead for the Save Our NHS in Kent group, Dr Coral Jones and county councillor Barry Lewis. 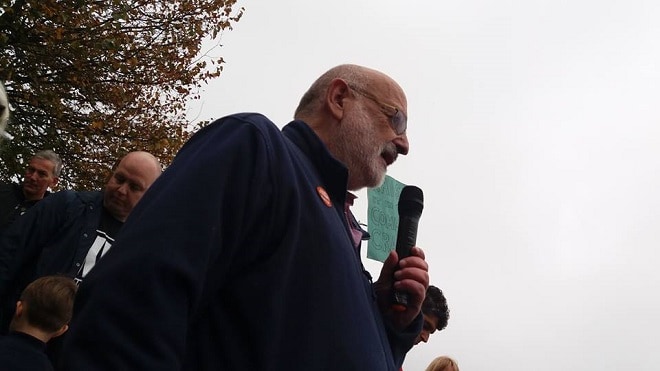 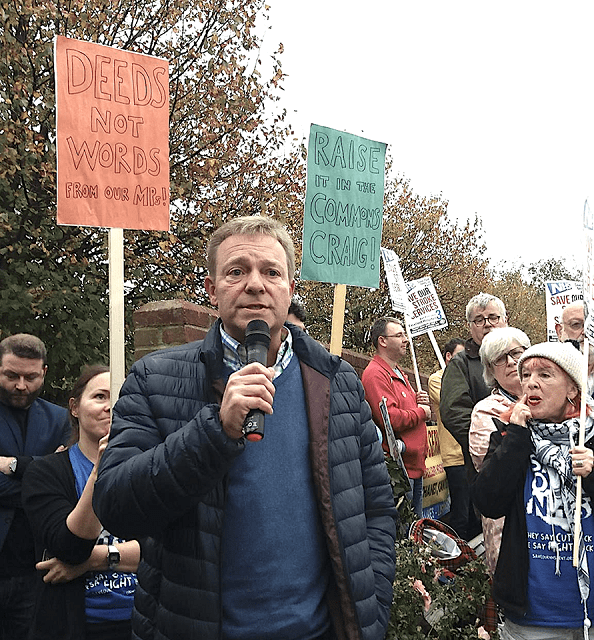 Mr Mackinlay told the crowd he wanted Thanet to have its own hyper acute stroke unit at Margate’s QEQM hospital but moved away from his previous suggestion that this should be a fourth unit rather than the three proposed by the NHS.

Labour’s Parliamentary hopeful for South Thanet, Rebecca Gordon Nesbitt, said: “Mr Mackinlay seemed to say today that he would like to see one of the three planned hyper-acute stroke units (HASUs) being sited at QEQM, but he didn’t have any tangible suggestions for how this would be achieved.

“Rather than calling for one of the chosen three hospitals to lose their stroke unit, our preferred option within SONiK would be for four HASUs in Kent and Medway. This would require additional NHS funding. 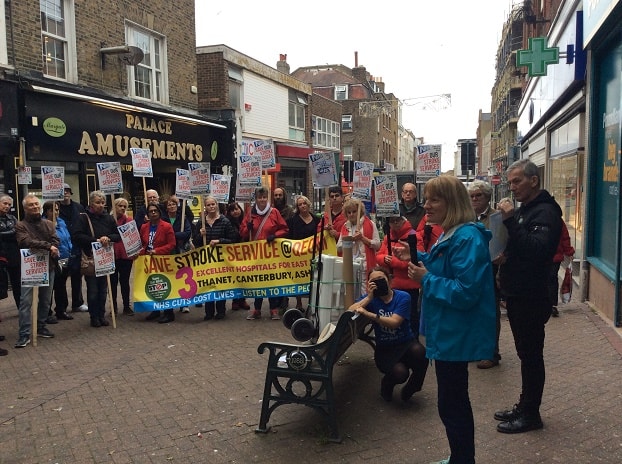 “I prevailed upon Mr Mackinlay to raise an oral question in Parliament as part of the health debate scheduled for October 23. He should ask why Thanet was left out of the options for a new stroke unit and urge the Government to make additional funding available for a fourth HASU here. I very much doubt he will do this as he’s propping up a dysfunctional Government hell-bent on starving the health and social care systems of the funding they need to survive.” 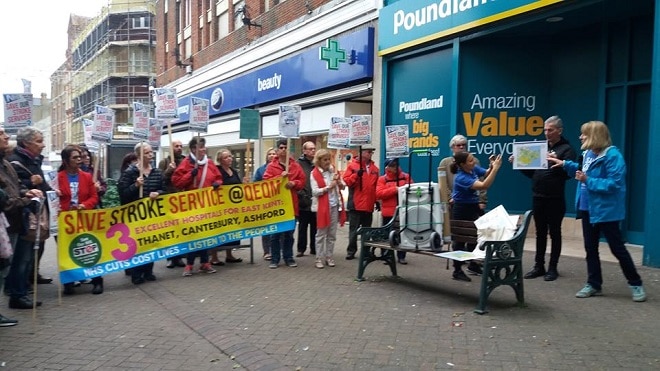 Rally speaker Carly Jeffrey asked the crowd whether or  not Mr Mackinlay should raise the matter in Parliament. There was a resounding show of hands in favour of the matter being raised.

Mr Mackinlay says he will be raising the issue with the Sustainability and Transformation Partnership (STP) which is spearheading changes to the health service. 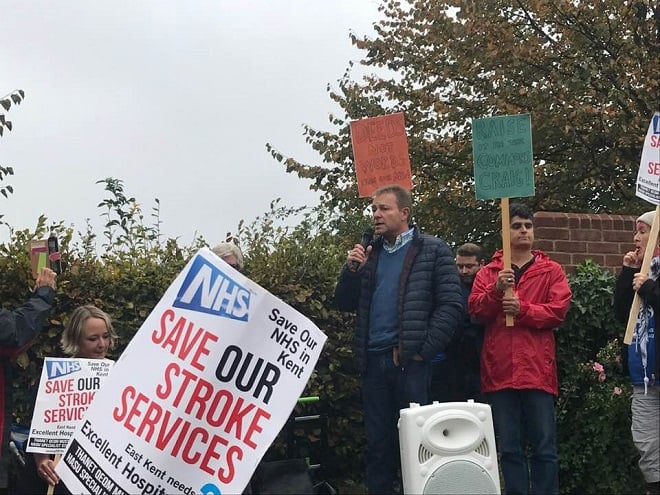 He said: ““I can appreciate that the concept of ‘everything, everywhere’ is no longer possible or desirable as medical care advances, but given the growing population of Kent, with more than 100,000 additional homes likely over the next decade under the current round of local plans being finalised by local authorities, the question of geographical spread of HASUs becomes hugely relevant.

“We have long been told by government advertising as to the importance of the first hour and the FAST doctrine following a stroke. These proposals do not fit with this advice for Thanet residents. It is a practical impossibility that travel to the William Harvey hospital in Ashford can be achieved in an hour, with poor road networks across East Kent. This means that Thanet residents become the most poorly served across the county under the plan.

“When I meet with representatives of the Sustainability and Transformation Partnership next week, I will be calling upon the NHS in Kent and Medway to look again at this proposal, as the only satisfactory outcome is a 4 centre option which upgrades QEQM to include a HASU for Thanet.” 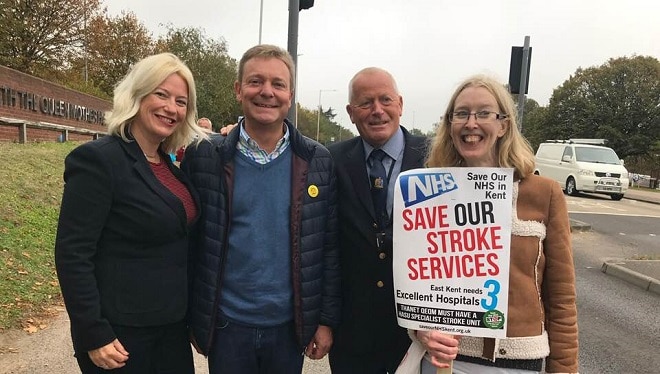 Also at the protest were councillors Keith Coleman-Cooke, Trevor Shonk and Sam Bambridge who is urging health chiefs to look at a previously discarded option for hyper-acute units at  Margate’s QEQM, Maidstone (MGH) and Ashford (WHH) as a ‘much more logical solution’ 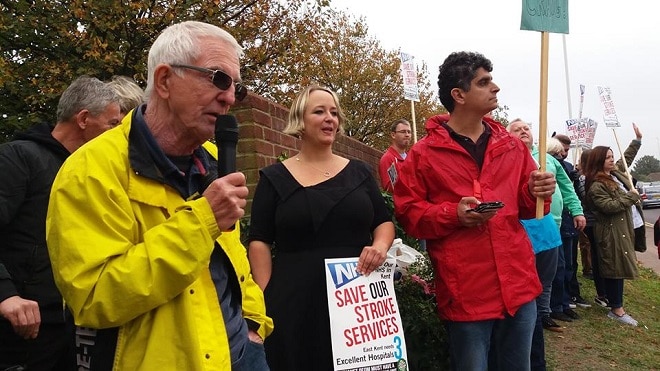 A spokesman for the NHS stroke service review group said: “The Queen Elizabeth the Queen Mother and the Kent & Canterbury hospitals were excluded from being potential hyper acute stroke units, because they did not meet the required criteria.”

SONiK has vowed to continue the battle to keep the unit open.

The SONIK spokesperson said: “We have to fight this decision every step of the way. We need more people out on the streets, putting pressure on their MPs, signing petitions — a real mass movement to stop the running down of the most precious public service we have — the NHS.”

Anyone interested in getting involved in the campaign or finding out more can email saveournhskent@gmail.com

There were some 5,000 responses during the stroke review consultation period, which ran from February to April 20, which were  analysed by DJS Research, an independent research consultancy.

DJS say the majority of people who took part in the consultation agreed that hyper acute stoke units should be established in Kent and Medway.

But the location of hyper acute stroke units, and travel times to the proposed units, were the key area of concern, with particular concern for people living in Thanet. Many felt the geography of the area meant that four units would be better in order to provide fair and equal access to all residents.

Many respondents in the CT postcode area – which includes Thanet -did not feel any of the options were suitable and said Kent and Canterbury Hospital or Queen Elizabeth the Queen Mother Hospital should be re-considered as part of the short-list.

The next stage in the review process is to develop a decision-making business case – a detailed document that will describe how the preferred option was selected and set out an implementation plan that will cover areas such as workforce, estates and capital requirement.

A Joint Committee of the ten local NHS clinical commissioning groups that ran the consultation will examine this and then make a final decision on the future shape of urgent stroke services in January 2019.