A Margate mum who has spent almost two years raising awareness of pregnancy and infant loss is in the finals of a national award and launching her next big project.

Stacie Goddard, 24, is one of the finalists for the awareness advocate section in the Butterfly Awards run by the Finley’s Footsteps charity.

She was nominated by members of her Angel Parents facebook group which she created after the loss of her son Peter in July 2016.

The award recognises an individual who has made an impact with their own story, a campaign or raised awareness.

This year the category also includes the parents of Charlie Gard who launched a failed legal battle to take their 10 month old son to America for experimental treatment for his rare wasting disease.

Stacie says she does not expect the win but is ‘delighted’ to have been shortlisted.

At a routine 20-week scan Stacie and partner Stephen Price, now 30, discovered the devastating news that their unborn son had renal agenesis, meaning his kidneys were unable to form. A lack of amniotic fluid also meant his lungs were unable to develop.

Following the devastating death of baby Peter Stacie tried to share her experience and pictures of Peter – named after forever young character Peter Pan – but was told she was ‘upsetting other mums.’

This prompted Stacie to create Angel Parents, mums, dads, rainbows and TTCs (trying to conceive), a group aimed at supporting others going through the dreadful suffering of infant death or miscarriage, as well as those trying to conceive despite obstacles.

Stacie, who is now mum to  daughter Aurora, 16 months, and son Stephen (pictured above), four months, said: “I decided to make my own group and promised myself and my son that I would try and make a difference and that he wouldn’t be hidden away. No baby should have to be hidden.

We had people who had chemical pregnancies to people whose child died as teenagers. No one is treated differently, we embrace our children and always talk about them.

“My aim was to show them and the world that  our children are not a taboo subject. We say their names loud and proud and share their photos without any shame.” 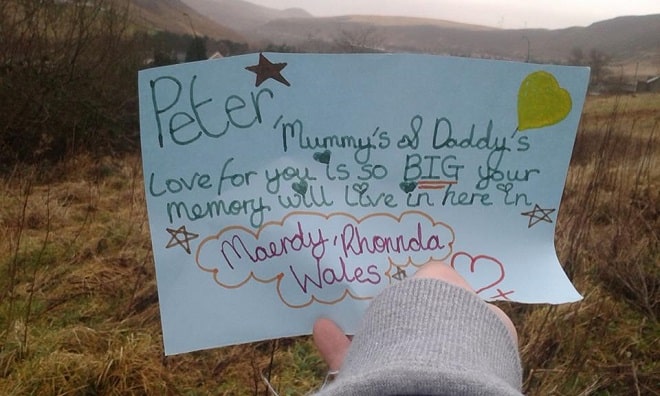 Stacie has already been behind two campaigns. The first one at the beginning of last year, was prompted by a message to Peter posted by Stacie.

In a photo she posted the words “Peter, Mummy and Daddy’s love for you is so big that your memory lives on all around the world.’

The picture went viral with shares around the world and people posting their own messages to Peter globally from countries including the USA, UK, Japan, Australia, South Africa and more. 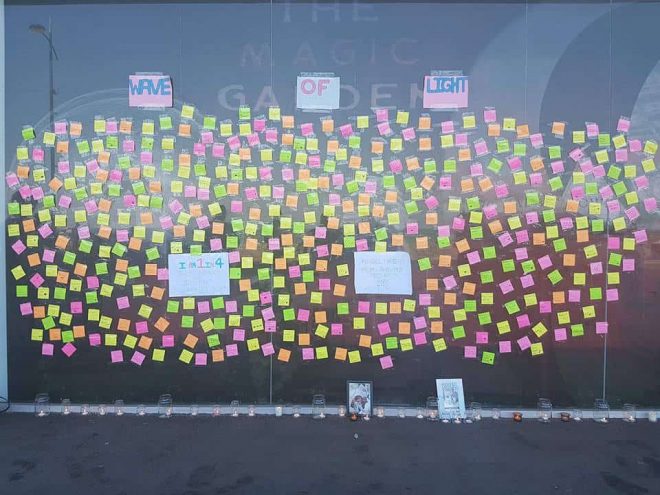 The second, last October, involved more than 600 post-it notes installed on the window of the former Dreamland Bars, marking the loss of hundreds of babies and infants around the world.

Stacie created the memorial as part of her group’s annual tradition of lighting a candle in memory of their little ones lost shortly after birth or during pregnancy.

Many of the 2,200 members of the group take part in the tradition, called the Wave of Light, every October 15 at 7pm.

Stacie said: “It was pregnancy and infant loss awareness week and I wanted to do something special along with the Wave of Light where the candles are lit to remember every single life that was lost in infancy, pregnancy or childbirth. I wanted to show the world how huge and serious infant and baby loss is.

“I asked my group if they wanted to be part of it and 600 of them said yes. I put them on the wall to symbolise that they are not just names on a bit of paper but babies.

“Hundreds of people asked us about it when we were putting them up and many have added to it which is really touching.” 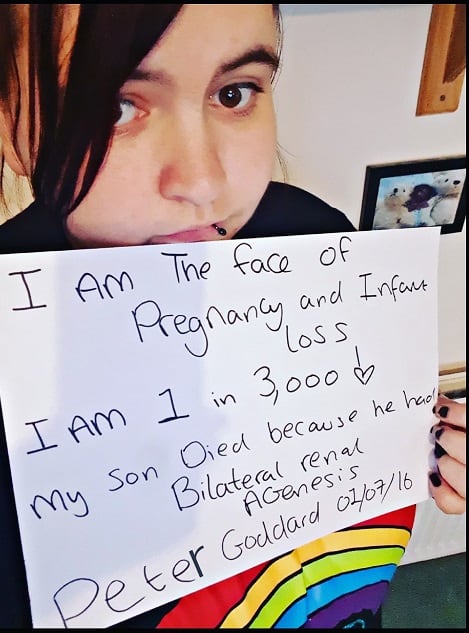 Now Stacie has a new project – one that aims to show people the statistics of infant and child loss.

She said: “A lot of conditions that cause loss are unknown by the public. Many people don’t know what the statistics are and think baby loss is rare but one in four women suffer a miscarriage – that’s a huge amount.

“So, my aim is to make people realise what those statistics are and how we do not talk about them because people are scared or feel that their babies are not the same worth or that there will be a negative reaction.”

The new project is a video with those affected by child loss holding a sign saying “I am the face of pregnancy and infant loss” and then adding the condition specific to them and the statistics associated with it.

Stacie said: “I want it to be a massive awareness video and to be seen everywhere. What I say about my Peter is: “I never got to teach you about the world, so I will teach the world about you” and this is part of that.”

So far 200 people have taken part over the last two months. The video is due to go live on October 15 but Stacie still wants more people to take part.

If you would like to be included message the Angel Parents, mums, dads, rainbows and TTCs group here

To vote for Stacie in the Butterfly Awards, and read more about her story, click here

The award winners will be announced on October 27.