The music of Chas and Dave greeted pupils as they arrived for their weekly singing assembly at Newington Primary Community Primary School in Ramsgate on Friday (September 28).

Music teacher Warwick Eldred and teaching assistant Lewis Cox performed the cockney singing stars’ hits The Sideboard Song and Ain’t No Pleasing You in tribute to pianist Chas Hodges who died on September 22.

Chas and Dave have a link with the school – Mr Eldred composed a six times table Maths learning aid song in their Rocky (cockney rock) style, with a video featuring animated graphics of the pair.

And when the duo found out about it and saw it on the Internet they contacted the school to say well done and even sent them a short congratulatory video message.

Mr Eldred said: “The pupils are aware of Chas and Dave through their learning of the Maths song and the video that he and Dave sent us. They will also have seen on the news at the weekend that he sadly died.

“So we thought we would pay our own little tribute at our singing assembly and say a few words about the music of Chas and Dave and how it is a very British part of our heritage with its distinctive style and content.”

The spirit of Chas and Dave was also present a year ago when pupils tackled a term-long project investigating London, its social and cultural importance and heritage.

Mr Eldred (pictured below) and fellow teacher Tim Knight dressed as Chas and Dave and, together with a life-size cut-out of The Queen, welcomed visitors to the school’s show that was all about the capital. 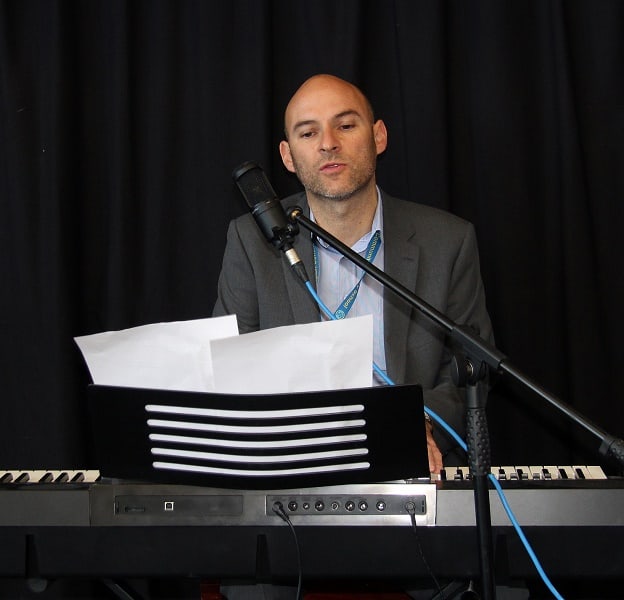 The Chas and Dave video for the six times table features animated graphics of the pair singing, plus images of London, which include pictures of The Queen, Tottenham Hotspur FC, actor Michael Caine, Winston Churchill, Peckham’s Del Boy and Rodney from Only Fools and Horses, Swinging London 60s icon Twiggy, and Mary Poppins.

This song finishes in true Cockney style with “have a butchers why don’t ya, at the six times tables song.”

Mr Eldred said: “Children love to sing and using this to prompt their learning is an effective and fun way of delivering information.”

The school has a variety of stylized and entertaining learning aid songs and Head Teacher Cliff Stokes said: “Creative learning is successful and it is something we embrace wherever possible.

“Chas and Dave helped us boost learning of our Maths tables song when they took the time and effort to write to us and send us a video message which in its own way underpinned our teaching. So we were happy to pay our own little tribute to Chas in assembly.”