Early plans for the £6million expansion of Turner Contemporary in Margate could mean a reduction to the entrance steps, removal of the rampway and a new entrance from Fort Road.

The Turner Contemporary Phase 2 scheme will be a combination of new build, refurbishment and reconfiguration at the gallery.

The aim is to expand the café area, relocate the shop into a new, single story addition to the gallery and free up exhibition space.

Designs also include additional toilets, a lift instead of the ramp and plans for new build additions to the original David Chipperfield site.

If funding is secured the project will begin in 2020 after the gallery has hosted the prestigious Turner Prize in 2019.

Turner Contemporary bosses say the expansion is needed due to the high volume of visitors to the gallery.

Councillor Hill said: “It was designed with the expectation of 150,000 visitors a year. Since it opened in 2011 the fabulous work by Victoria Pomery and her team has resulted in visitors way in excess of what we expected. There were 500,000 visitors in the first year and since then around 400,000 a year,

“The facilities are not big enough for customers and there has been wear and tear over the years. We propose to bring the building up to its original high standard and to give us a bit more space and give the trust the opportunity to raise more income through the gallery.”

Ms Pomery, who revealed the gallery is expecting some 250,000 visitors to attend for the Turner Prize event, said the main aims are “accessibility, sustainability, income generation and visitor experience.” 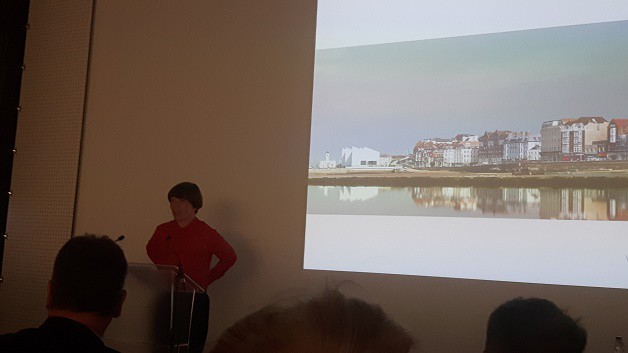 Avanti Architects have been working on the proposals for around 8 weeks. Talking of initial plans Fiona Lamb said: “We need to expand the café into the entrance foyer and relocate the shop in a single storey addition at the site. We need to move the shop functions out of the Sunley Gallery and leave that space clear for exhibitions.

“Our brief from Turner Contemporary was that they wanted everyone coming to the entrance in the same way.”

Designs show a lift replacing the long rampway, reduced steps up to the gallery, seating and landscaping outside and a new entrance from Fort Hill with the crossing moved up to that point.

New addition building would take place on the Fort Hill side of the gallery with the design complimenting but not exactly replicating the current property.

At the presentation Margate ward councillor Iris Johnston said the proposals were not ‘brave enough’ adding: “An awful lot more needs to be thought about. It needs to be for the long term and not damage the integrity of the building.” 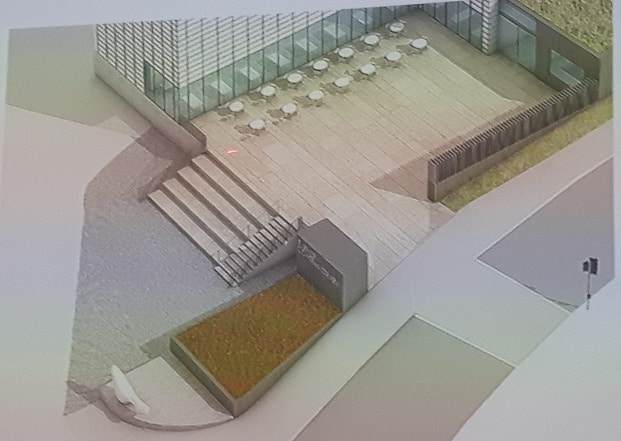 Questions were also raised over what materials would be used and whetherthe new build would affect access coming from Cliftonville to the ‘top’ of the site.

The scheme would be funded by £3 million from Arts Council England (ACE) and around £2.6 million  from KCC with the remainder made up from other sources.

Any changes to the building will be subject to a successful funding application to Arts Council England. A Stage 2 application will be submitted by December 14.

Separate plans for a 100 room ‘hostel’ next to Tuner Contemporary were unveiled by architect David Chipperfield last month.

The proposal for the Turner Rooms, which is a different project to the Avanti scheme, is aimed at securing the financial future for the gallery, saying it will: “provide a residential component to the gallery’s facilities, accommodating visitors and group events, such as conferences, that are related to the Turner Contemporary programme.

“The hostel contains 100 simple, functional sea-facing rooms across four levels, which are designed to be accessible in price and flexible in arrangement. Meeting rooms, social spaces, and a cafe/brasserie will be located on the lower levels of the building, and open out onto the surrounding terrace.”

Margate RNLI branch is already looking for a new base. The current site will become untenable as Turner Contemporary carries out its expansion plans.

The branch will be served notice when the lease expires in April 2021 for the current boathouse which is based behind Turner Contemporary. The boathouse is also too small to house the new Shannon all-weather lifeboat, meaning a larger venue is needed.Exploratory works took place in Margate harbour last month.

The  core sample works were part of investigations being carried out as the RNLI branch looks for a new base.

It is not yet clear how the proposals will affect the Margate Yacht Club boat parking facilities.