Ramsgate Fencing Club is running a beginners’ course for local children to try the sport. Wheelchair users are welcomed.

Club secretary Jack Stone said: “The course will show the basics of fencing including how to hold the sword correctly, how to move whilst balanced and how to make simple attacks and defend yourself. Often fencing can look difficult but once you have been shown the fundamentals it is pretty easy. Some people come just for fitness whilst others take the sport seriously with aims of fencing at national level.”

The course is at Ramsgate Sports Centre on Thursdays from  5pm until 6 pm and starts on September 13. For further details email kentfencing@hotmail.co.uk. People should bring trainers and a drink.

Ramsgate Football Club is recruiting new players for their Ramsgate Colt Under 12 team as part of their progressive Ramsgate Youth Academy.  We are looking for talented football players aged between 11 and 12 to come along to our trial evening on Tuesday 13th September, who love playing football and can dedicate time to training every Tuesday and play weekend league and Cup games.

In the first instance, parents, guardians or carers should contact the team manager, Martin Bishop via email at ramsgate12b@gmail.com to register their interest and find out more about the sporting opportunities offered by Thanet’s oldest and most progressive football club! 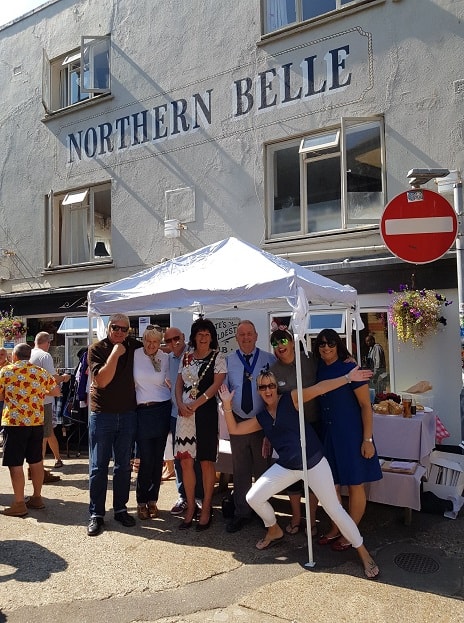 A 12 hour festival of Ska and Two Tone music held at the Northern Belle pub in Mansion Street on September 1 has raised more than £3,000 for charity

The town’s oldest boozer, dating back to 1680, hosted DJs, live music, a record and vintage clothing stall, barbecue and raffle in aid of Pilgrims Hospice.

Money raised at the Across The Board event is still coming in.

Lucy Potter, one of the organisers, said: “We have been overwhelmed by how generous people have been. This started off as a target of about £1000 and it just snowballed.” 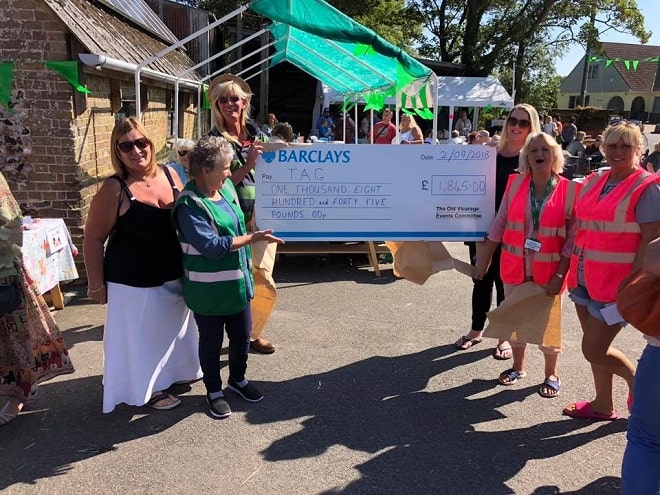 The Old Vicarage Charity Ball committee are proud to announce that this event made £1845.00. The charity that benefitted from this was Thanet Animal Group. We presented them with a cheque at their open day.

Thanks to The Hair of the Dog, The Saddler and Attwells for selling tickets, to all those who donated raffle prizes, to the Saddler for donating canapes and cheese boards. Also thanks to Drinks Warehouse for their generous donation. So many friends gave help preparing and on the evening and to those who bought tickets. We thank you all. We hope you can all make it next year. From Michael Abbott Karen Brazil Leanne McCarthy Helen Saunders (committee)

The screening of A Plastic Ocean, the moving documentary narrated by Sir David Attenborough, at the Palace Cinema, Broadstairs, last week was a SELL OUT.

Organised jointly by Thanet Over Fifties Forum (TOFFS) and Broadstairs Town Team, the film highlighted the global impact of plastic pollution on the world’s seas and beyond, arguing that the problem was not limited to marine life, but also to human and other land-based life too.  Once plastics enter the oceans, they break up into small, toxin-filled particles which in turn enter the food chain and are eventually consumed by us.

TOFFS Co-ordinator Pauline Petitt said: “This is an issue which members of the Thanet Over Fifties Forum felt very strongly about and wanted to learn more.  It became evident to those present that the scourge of plastic waste will not only affect future generations but is indeed already having an adverse impact now.

“Please, please do your bit to reduce your use of single-use plastics, as together we can make a difference, especially locally, to safeguard the beautiful marine and bird life around Thanet’s coastline”.

Greenpeace UK is also running an online petition asking UK Supermarkets to “Ditch throwaway plastic packaging!”.  The petition has attracted more than 700,000 signatures to date and is available to sign at www.greenpeace.org.uk.

Pauline added: “A big thank you to everyone who came to watch A Plastic Ocean, which proved to be an extraordinary documentary.  All ticket sale proceeds went to the Plastic Oceans Foundation to help them continue to educate and inspire”.

Next up for TOFFS is a Forum Meeting at the Gap Centre, Broadstairs, on Wednesday 19 September at 1:30pm, where Steven Harrison of local solicitors Robinson Allfree will speak on Lasting Powers of Attorney, Estate Administration and Trusts; along with Ged Timpson from Thanet Clinical Commissioning Group on changes to accessing GP services locally.

To find out more about TOFFS, which is free to join for over 50s in Thanet, contact toffs@thanetvolunteerbureau.co.uk or call 01843 609337. 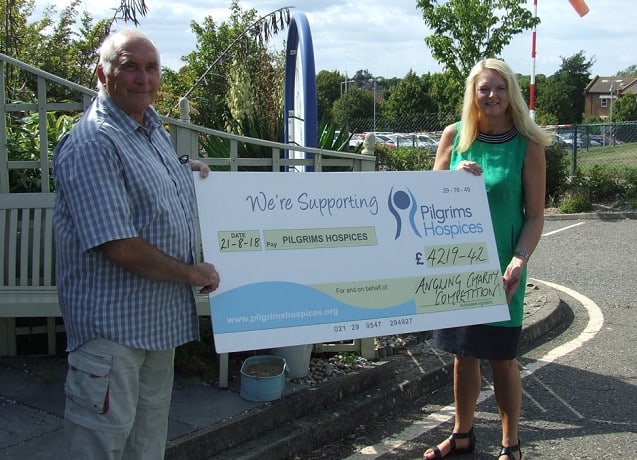 The pairs match which was made possible by the hard work of organisers Brian Allen, Jon Weir and John Sturge, proved a great success again this year. Through generous sponsorship the event and fishermen, raised an amazing £7,366 over two years for Pilgrims care.

John said: “We had an excellent turnout of 24 angling pairs for the match that took place in July.  The winners with the largest fish were, Skip Knight and his partner Noddy, with a fine 26lb Mirror Carp. Henry Weir was the top junior with three Carp, the heaviest weighing in at 10lb 8oz.”

The superb weather lasted throughout the weekend with all those involved having a great time at the barbeque on Saturday and prize draw on Sunday. All prizes for the draw were donated by local business and supporters.

“We are very pleased to have presented the cheque to Pilgrims Hospices, the charity is a much-loved and important part of our community.” John added.

Karen said; “This really is a wonderful event which brings much enthusiasm from many anglers, we really cannot thank everyone enough for their time and effort in making this possible. This donation will help provide care for patients, their families and friends who need our help the most.  Every penny will help support our work here at Pilgrims, thank you.”

If you have an event that you would like to speak to us about, please call Karen Kenward on 01843 233934 or email: karen.kenward@pilgrimshospices.org.

League of Friends of QEQM Hospital

The League of Friends of the QEQM Hospital has arranged a Fashion Show & Supper as part of its fundraising to buy equipment and facilities to benefit our local hospital.

It’s on Thursday 11th October at 7pm for 7.30pm at the Winter Gardens, Margate.

Local stores Amber Rose, Edinburgh Woollen Mill, La De Da, Laura Ashley, Roman & The Saltworks are all very kindly lending some of their fashions, which will be modelled on the evening.

Tickets are £23, which includes a two-course meal, and can be obtained by ringing (01843) 234507. Prior booking is essential and any dietary requirements must be advised at that time. 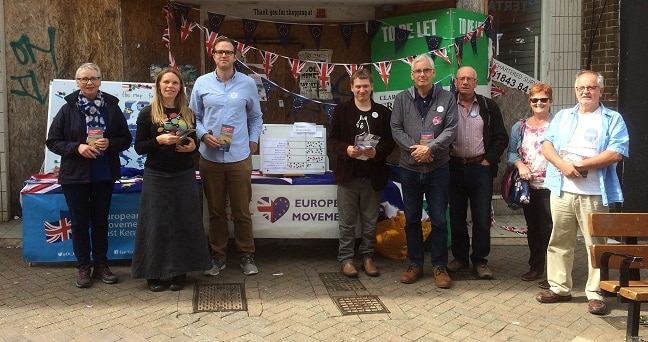 Members of the Thanet 48% group have held two ‘Brexit-o-meter’- stalls in Ramsgate and Margate.

Mark Nottingham, East Kent European Movement and one of the organisers, said:“It is clear that Ramsgate shoppers want a People’s Vote as shown by our Brexitometer. We had lots of conversations and signatures for the People’s Vote petition too.” 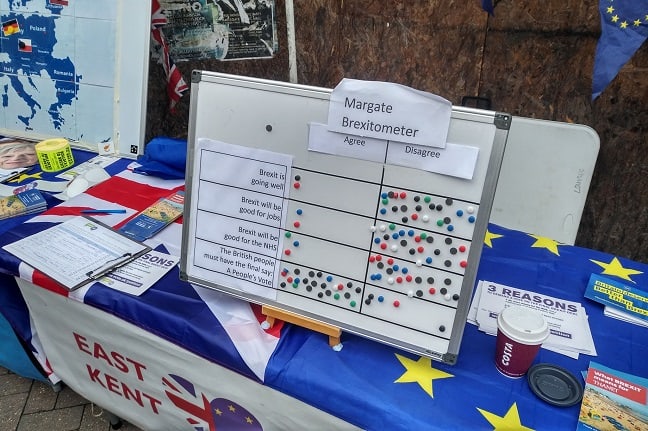 The street stall was supported by a number of cross-party members representing the Green Party, the Lib Dems and the Conservatives.

On Saturday, September 8 the pro EU group was in Margate High Street.

One of those attending was Rob Yates, who hit the headlines earlier this year over his BLOCKBREXIT window signage on his flat in Arlington House.

During the event a leaflet recently published by the East Kent European Movement entitled “What BREXIT Means For Thanet” was distributed.