I gatecrashed a wedding last week. Pathetic, eh? Apparently I’ve reached That Certain Age where every wedding seems fascinating and magical. In my defence, I slightly know the bride’s aunt, but I’d not met bride or groom, before, during or since.

I know, I know. I’m ashamed of me too. I slipped away before the photographs, before the drinking; the first moment, in fact, my eyes were acceptably dry. The very instant they flung the church doors open I was sprinting down that aisle before you could say fascinator.

Oh, but it was glorious! All that hope and excitement, glowing children, beautiful readings, promises to have and to hold, to comfort, to share, to nurture.

I nodded fervently at the ’in sickness and in health’ bit, since my own groom’s health has deteriorated rapidly since our wedding day: he asked recently if I’d still have married him if I’d known the state he’d be in a year hence, as though I loved him solely for his ability to walk. Most men can walk, for heaven’s sake: only one of them does it for me, then as now. In fact, more now than then. If he had any idea how much of my brain he occupies, he’d be rightly terrified. 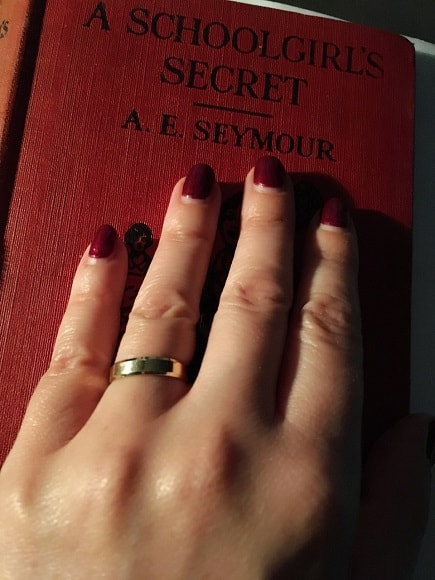 My husband didn’t want a ring. He’s not one for jewellery. And I’m not one for spending, so that suited me fine. The vicar told us it was the first ceremony she’d ever conducted where the man didn’t get a ring, so I guess we’re a rarity. But wedding rings for men are a modern phenomenon, unheard of before the 20th century, unusual still right up until the 1980s.

Today, around 90% of grooms take a ring alongside a wife. One might propound this is feminism making itself felt: women no longer belong to men: each party remains a separate, independent agent, entering a contract of equals. I suspect it’s more a trend created by jewellers. the way Hallmark invented grandparents’ day. There’s nothing remotely feminist about marriage, however many rings you buy.

I love my wedding ring, feel naked without it; yet my husband’s decision to eschew a matching lump of metal seems absolutely right to me. You can tell he’s mine by the expanding waistline and permanent goofy grin. I don’t doubt his commitment – he declared his feelings and intentions before everyone we know. Rings are removable; public declarations linger.

Thank you for a brilliant afternoon, Mr and Mrs Stickels. It’s great to be reminded of what matters.