Rapper and Top Boy series actor Kane Robinson – best known as Kano – has been filming on the isle.

Crews were spotted in Athelstan Road and at the Lido site yesterday (August 29).

The 33-year-old grime artist is shooting scenes for a new series of Top Boy which will screen on Netflix next year.

Crews were photographed during the shoot with resident Nikki Humber catching some great shots of filming at the old Lido sign site, with the crew setting off fireworks. 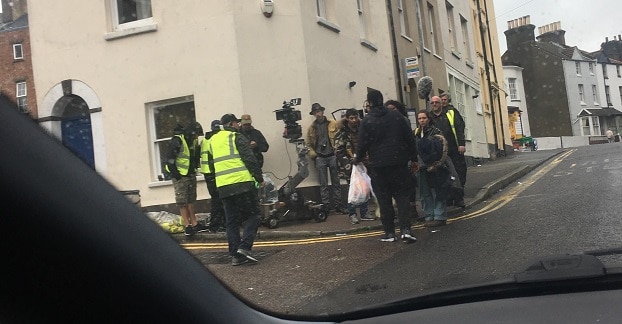 The crew has also been spotted shooting scenes by the Plains of Waterloo in Ramsgate today (August 29).

The gritty Top Boy series follows two drug dealers on a housing estate in East London and was created and written by Ronan Bennett.

The original series aired two seasons on broadcast in the UK before ending in 2013, both seasons are now on Netflix.

The next chapter, consisting of ten new episodes, is written by Ronan Bennett and executive produced by the original creative team – Charles Steel and Alasdair Flind (for Cowboy Films), Ronan Bennett (for Easter Partisan) and Yann Demange – and will premiere as a Netflix original series.

The new episodes pick up as Dushane (Ashley Walters) returns from exile to his home in London to reclaim his throne in the highly lucrative drug market. He teams up with Sully (Kano), his spiritual brother, partner, and sometime rival who is also returning to the same streets after being released from prison.

But a new gang leader is in play and his plans don’t include Dushane and Sully.

The series sees Canadian singer, songwriter, record producer and actor Drake make his directorial debut following his buy out of the rights for the show last year. He will work with business partner Adel “Future” Nur, along with Maverick Carter and Jamal Henderson for SpringHill Entertainment.

Filming for the new series started in July and is scheduled to run until the end of the year.