The Libertines – made up of Peter Doherty, Carl Barât, John Hassall and Gary Powell – will become Margate Football Club’s headline shirt sponsors for the 2018/19 season in the Bostick Premier League.

The band’s logo will emblazon the local non-league kit both home and away with new kits expected to fly off the shelf and be spotted across Thanet, and beyond. 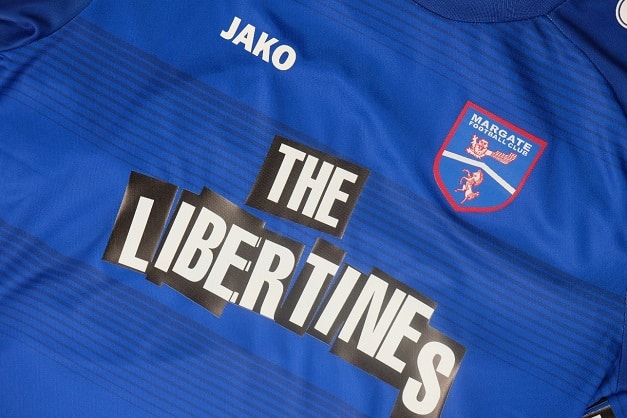 Speaking about the collaboration with the band, Margate FC General Manager, Deny Wilson, said: “With little under 24 hours until the new season starts we are thrilled to share the news that The Libertines, will be our shirt sponsors this season.

“It’s a pioneering partnership and one we firmly believe will be a huge hit with supporters at Hartsdown Park, residents across Thanet and music fans across the world.

“We’ve got a series of exciting things lined up and truly believe we can work together to help showcase Margate to as large an audience as possible. We look forward to welcoming the band to watch games and there’s no doubt they’ll get a warm reception from fans!

“I would also like to thank artist Luke McClean and author Neal Heard who both helped inspire this collaboration.”

The Libertines, who last year set up The Albion Rooms hotel in Cliftonville,, are putting plans into action to launch a creative residential hub at the property featuring a recording studio, bar, and of course hotel rooms.

They are also curating their own festival day – ‘Sharabang,’ which sees the band hijacking the Sunday, September 9 at ‘Wheels and Fins’ festival at Joss Bay.

The band said: “We’re getting very nicely settled into our new home by the seaside… opening our hotel, curating our Sharabang, and now delighted to be partnering up with local heroes Margate FC as their official shirt sponsor for 2018/19! Feeling very honoured to be part of the magic of this town. See you out there.”

The Gate begin their Bostik League campaign on Saturday, welcoming Corinthian Casuals to Hartsdown Park for a 3pm kick-off.  Spectators will be amongst the first to see The Gate in their new strip for the season.

Click here to purchase the official 2018/19 Margate FC Away Shirt.