Seven bikes have been seized by Police Community Support Officers and police on patrol at Westwood as part of ongoing work to target anti-social behaviour.

The work was carried out in response to concerns about nuisance cycling and disturbances caused in the pedestrianised areas of the retail parks off Northwood Road, Star Avenue, Poorhole Lane and Westwood Road.

A 48-hour dispersal order was put in place which gave officers extra powers under the Anti-social Behaviour, Crime and Policing Act 2014 to tackle those carrying out nuisance behaviour and order them to leave the area. If they return to the area within a specified time, they can be arrested.

The order began at 6pm on Wednesday 1 August and runs to 6pm tonight (August 3).

Patrols are continuing by PCSOs and officers from the Thanet Community Policing Team while businesses have been spoken to regarding any concerns. 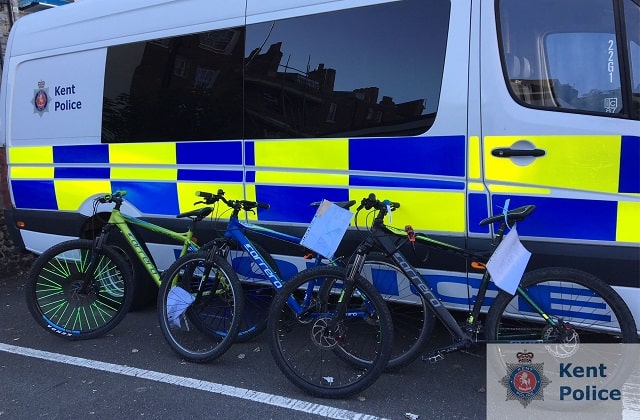 Yesterday (August 2), seven children aged between 13 and 15 years old were formally asked to leave the area, and their bicycles were seized.

All the young people have been spoken to about their behaviour and officers will be also informing their parents.

Sergeant Neil Fuller of Thanet Community Safety Unit said: “During the school holidays in this area we have seen an increase in reports of people riding bicycles recklessly in pedestrian areas, weaving in and out of shoppers, pulling wheelies and causing a serious risk of harm and injury.

“Disturbances are being reported along with incidents of verbal abuse aimed at shop and security staff whenever cyclists are asked to leave the retail areas.

“This area of Thanet attracts a lot of people and traffic daily, so although this anti-social behaviour may be caused by a small minority of people, it can still have a big impact on others and pose a real safety issue.

“We encourage residents and businesses to report any concerns if they believe similar issues are taking place where they live and work. Their information is important and it helps us to identify and target any problem areas.”

Reports can be made by calling 101 or online via the Kent Police website (or call 999 if a crime is in action).