A complaint is said to have been made to the Health & Safety Executive claiming the play area at Bell Meadow has been left in a ‘dangerous’ state  following clearance of old equipment from the site.

The area was closed off for the removal of the playground equipment from July 6 in preparation for the construction of a new play area.

St Nicholas-at-Wade and Sarre Parish Council say although the equipment was safe to use it had not met modern health and safety standards for a number of years according to a ROSPA (The Royal Society for the Prevention of Accidents) report.

But  Mark Sanders who is a parish councillor but was not acting on behalf of the authority, says he made a complaint  to the HSE yesterday (July 31).

He said: “This (removal) has been done in a very unsafe manner leaving multiple pieces of exposed and broken metal, wood and concrete as well as deep holes in what was the playground.

“The old metal slide and swings have been left without any meaningful and secure fencing – there is orange tape which is just laying on the ground – and there are no warning signs pointing out the danger.

“This was started a week ago and is still in a dangerous state. Additionally there are no lights on Bell Meadow so at night the entire area is in complete darkness making it even more unsafe.

“Several members of the village have raised their concerns with me due to the ongoing risk posed to members of the public, in particular children and any dogs which frequently are walked in the area.

“This is obviously far from acceptable and in the meantime children will continue to be at risk. I have contacted the HSE and (they) have requested pictures of the site which are being sent to them today.” 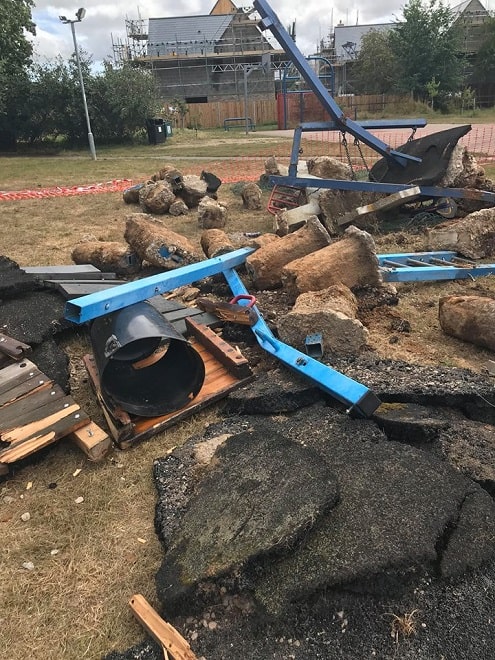 But the parish council lead for the project, Rob Searle, says the site has been cleared with the last of the concrete pieces expected to be removed today by a construction company.

Cllr Searle said: “It is all fenced off and has danger tape around it. All the metal and most of the concrete has gone and the rest is due to be removed this afternoon, we are just waiting for the construction company to come and take it.”

Cllr Searle says a previous complaint was made via Streetscene but the community warden, who is also working on the project, visited and found no issue to be resolved.

Parish council chairman Gordon Bryant reiterated that the site would be cleared. He said: “I can confirm that the last of the waste matter will be cleared by Friday afternoon at the very latest so that the construction company can come on site on Monday.

“I accept that this site clearance has taken longer than we hoped but it has been done by a small group of volunteers who should be applauded for their efforts.

“We are sorry for any inconvenience that this work has caused.”

Cllr Bryant said he had not been made aware of a complaint to the HSE.

The new equipment is due to be installed next week with a ‘grand opening’ planned for later in the year.

A HSE spokesperson said: “HSE did receive a concern and made some enquiries. The site has been cleared and we are now satisfied the playground is safe.”