A Thanet Wanderers Rugby Union Football Club U17 player has excelled in his first senior game… for the national Norwegian Men’s XV against West Sweden,

Marius Thompson trained with Wanderers senior squad last season but was too young to play for the team.

The club alerted Head Coach of the Norwegian Mens XV team Ben Scully to Marius, who is of Norwegian heritage.

The Chatham & Clarendon student was invited to attend a training camp and was so impressive he gained a place on the team for the game against West Sweden.

Cary Wright, Director of Rugby at Thanet Wanderers, said: “Marius Thompson has an abundance of natural talent. He trained with our senior squad for most of last season and, along with another couple of lads from the U17s, and showed remarkable potential. He would have played his first senior game for Thanet Wanderers, last season if he were not so young, he only became available for selection after the season has ended!

“As part of our club’s direction, we are working really hard on developing rugby in local schools and for members of our community and we are working hard on transitioning our junior players into the senior game. It is therefore fantastic, for everyone involved at Thanet Wanderers to have such great development success so early into our 3-year plan. Without our team of dedicated coaches, players, supporters and sponsors, none of this would be possible

“Everyone at Thanet Wanderers feels tremendously proud of Marius’s achievement and have no doubt that he continue to grow during this season’s International games, commencing in September.” 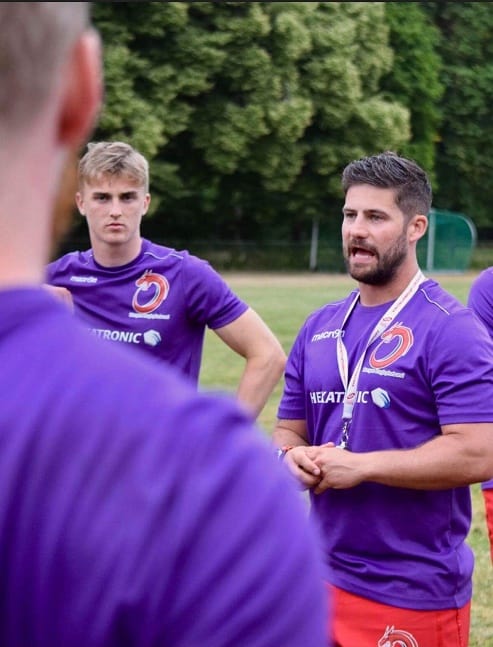 Ben Scully, pictured above with Marius, added: “I feel that it is important that we discover and nurture as much young Norwegian talent in key positions as possible; to ensure that the national team can one day break the mould of relying on foreign blood to shape the game and to show young aspiring players that there is a route to play International sport for their country. I am pleased to say that Marius Thompson may allow us to develop both of these targets.

“I was made aware of Marius, as an up and coming talent, by Thanet Wanderer’s Director of Rugby, Cary Wright. Although his CV was impressive, at only 17 my initial thoughts were that this would be a player to bring in to the squad with the long term aim of developing him over a number of years before placing him in a senior playing position. I was pleasantly surprised with the player that attended our recent training camp in Horten. Marius is certainly a confident character, mature beyond his years, who was not afraid to embrace his role at Fly Half and as one of the team’s tactical leaders.

“As well as a great attitude his skill set is very impressive, with his ability to kick, pass and run causing defender to second guess what he may do next. Credit must be given to both his youth and senior coaching staff at Chatham and Clarendon Grammar School and Thanet Wanderers RUFC for developing such an exciting young talent with such a well-rounded game. “

Greg Wooldridge, from Chatham and Clarendon Grammar School, said: “We are all really proud of how Marius has progressed over the last few years. He has always impressed on the rugby pitch and led by example to his peers. In recent years Marius has really pushed on both in skill level and his understanding and game management.

“To see Marius not only undertake a week away with the Norwegian rugby but to excel gives us great pride and he is  a real model for the younger students here at Chatham and Clarendon.”