An EU party on Margate sands is being hosted today (July 7) by a windfarm worker who hit the headlines earlier this year when he was threatened with eviction from his Margate flat for putting a Brexit protest banner in the window.

Rob Yates was told by building leaseholder Freshwater to remove a BLOCKBREX.IT​ sign, which has LED lighting in the evening, from the window of his Arlington House flat.

The sign, which The Isle of Thanet News reported on in February, is to share Rob’s view that the country needs a second referendum over the decision to leave the EU and to promote his BLOCKBREX.IT ​ website where people can play a retro-style, political game. 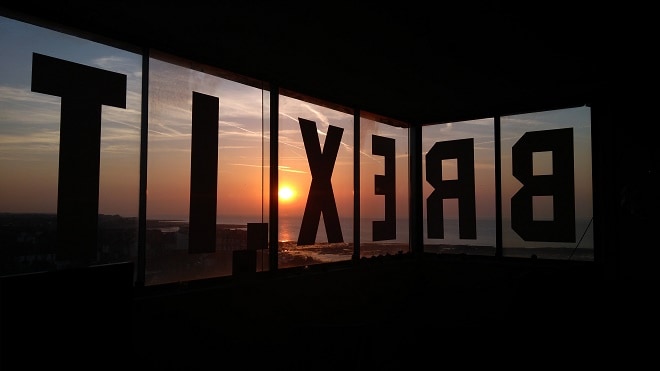 Freshwater say although they are sympathetic to the political message, the installation breaks the terms of Rob’s lease and must be removed.

Mr Yates is being supported in his EU event today by some residents of Arlington House who have now placed their own signs and flags in the windows of their flats. Some 60 flags are planned to be displayed at the block.

The We Are Not Leaving EU Beach Party takes place from 2pm-7pm on the beach opposite The Sun Deck beach side bar and Bus Café.

A number of family fun activities are planned, including:

The event coincides with Democracy Week.

Mr Yates said: “My driving licence has two flags on it, the Union Jack and a European flag. This means that we can drive to Europe and they can drive here, even though we drive on opposite sides of the road. These basic mutual agreements are being threatened by a no-deal Brexit and I want it to stop.

”The economic case is clear, Brexit will be damaging to the country. Kent County Council has already warned that Kent faces “increased risks” if the government does not deliver a frictionless border following Brexit. We demand to know just how damaging it will be for residents and to be given the chance to vote on the final deal; knowing what we know now.

“The recent People’s Vote March in London is a clear indication that Brexit is not a done deal and only a people’s vote can resolve this mess. Our beach party shows that even in Thanet, where 65% of people voted to leave the EU, there is huge support for staying in the EU. Margate lies 2 hours from the continent and Kent is the gateway to our European partners.”