If you have been on Margate seafront today (July 5) you may have spotted two men in dresses, a pink unicorn and a massive seagull.

The eye-catching crew rolled into town this morning in the Bongo’s Bug ahead of the Bongo’s Bingo night at Margate Winter Gardens on Friday, July 13.

Bongo’s Bingo is an insane mix of a live show, a rave and heads-down game of bingo, with dance-offs, plenty of heckling, audience participation and countless hands-in-the-air anthems.

Expect big cash prizes as well as other, stranger, winnings along the lines of a pink unicorn, cereal or Henry Hoover, but be warned, you may have to take part in a dance off to get them!

Bongo’s Bingo, created by businessmen Jonny and Josh and hosted by Jonny Bingo and his entourage, started off touring the UK but is now in demand in places as far flung as Australia, Dubai and Ibiza.

The wacky entertainment night began as a pub quiz and simply grew.

Team member Darren said: “We do it because it is fun, bingo was boring, it needed rejuvenating.

“We change up the shows so no one show is exactly the same and people of all ages love it, from 18 to 90 – we even had a 90 year old celebrate her birthday at one of our nights last week.”

And was the 297 mile drive from Liverpool to Margate worth it? Darren said: “It has been great, everyone is so friendly, coming up and talking to us and saying they have seen the show online.” 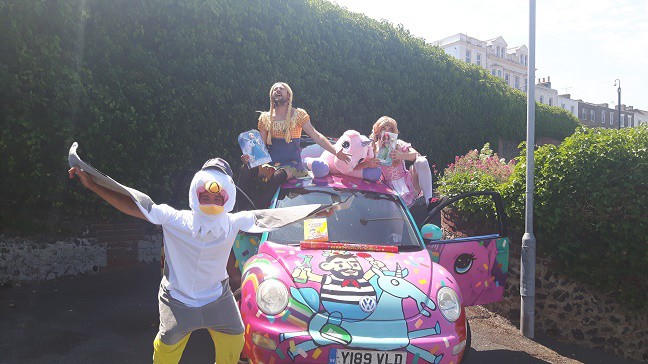 The crew are in town until 4pm so you might still spot the giant pink unicorn yet!

Bongo’s Bingo is coming to Margate Winter Gardens on Friday, July 13 from 8pm to 11pm (doors open at 6pm). It is an over 18s night only.

All plus £2 booking fee