Plans to take over the multi-storey car park in Ramsgate for an art installation display have been cancelled.

The display was to have been part of the new Ramsgate Festival of Sound produced  by Ramsgate Arts ( Ramsgate Festival) in partnership with Ramsgate Week and  Article 10, the team that created the popular Littoral Light Festival over the past two years.

But due to health and safety concerns raised by Thanet District Council it has been decided that the works will now be shown in different venues throughout Ramsgate.

Festival producer Andrew Gibson said: “We are disappointed not to be able use this interesting space but the safety of visitors is always the number one priority. The change of venue however will allow us to present each individual work for a much longer period and place each piece in unusual settings that complement the work. It also allows us to support local businesses and artists by drawing visitors off the beaten track to discover some hidden gems.”

Ramsgate Festival of Sound runs from July 21-30 alongside Ramsgate Week. It will include talks, performances, music, family fun and sound installations taking place around Ramsgate town and the Royal Harbour.

Most of the performers, composers, musicians and sound artists are Ramsgate and Thanet residents. For the third year Terry Prue has assembled a series of talks to provide a historical underpinning to the festival activities.

An historical theme runs throughout many of the works which have been inspired by the history and lesser known stories of the town.

Ramsgate poet, Sarah Tait celebrates Jane Pugin’s life in Finding Jane, following her journey from impoverished widow and single mother-of- eight to her last years at St Augustine’s, when she was known locally as ’The Grand Old Lady of Ramsgate’ The poetry reading will take place in Pugin’s House, The Grange at 7pm.

Alt-cabaret  night Screaming Alley takes place in the Red Arrows Club from 8pm and on July 29  Things With Words and Music takes place on the East Cliff  Bandstand, a travelling spoken word event from Ramsgate that has become known for mixing poetry and storytelling with a flair for the theatrical and a good smattering of music.  Also featuring The Lunatraktors, your local ‘broken folk’ duo and activities for kids of all ages.

In 2011 Thanet artist Filipe Gomes decided to embark on a journey that would bring the ST Cervia steam tug back to life sonically. Over the course of a year, Filipe travelled the world and worked with past crew members in an attempt to gain a detailed understanding of what the vessel sounded like when she was functioning.

The resulting installation is a detailed recreation of the vessel in full working order. The whole boat and its components are a complex variety of sonic experiences, and visitors will literally hear the bubbles under their feet, the rhythm of the engine and the wind through the windows. This installation will run on July 28-29

The installation is a composition, sound installation and series of sculptures. It senses movement and responds to visitors, triggering music and sound. Commissioned to exhibit in June 2018 at the Cross Bones graveyard in London’s Bankside, it acts as an interpretation of lives once lived and laid to rest there, reflecting the history and narratives of babies, children and adults.

As a Ramsgate resident, Emily created this work locally, with the support of local artists and singers, and driftwood from isle beaches. Visit www.emilypeasgood.com for more details. The installation will run from 11am until 5pm. 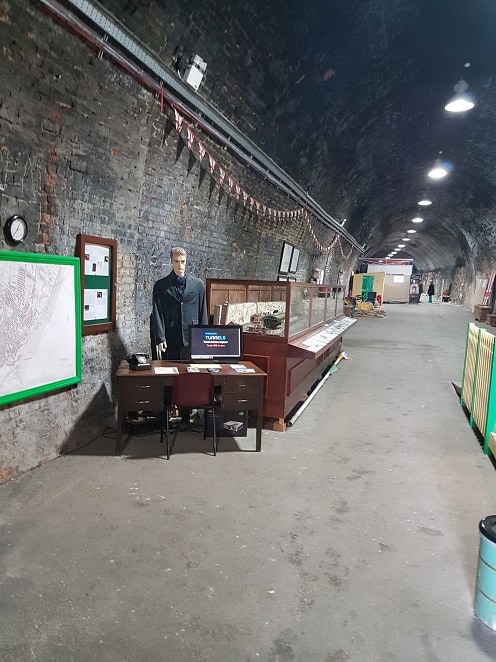 Ramsgate Tunnels will host two sound shows, The Sounds of Wartime on July 28 at 6pm and Gagarin on July 29.

The Sounds of Wartime is a nostalgic double bill performed by Sarah Head and Tom Adams. Sarah is an actress and West End star and has toured extensively with Aled Jones. Her credits include Eastenders, National Theatre and her own solo show. Evoking the glamour and sounds of the fabulous 40s Sarah transports her audience back to the war and post war period.

Tom  is a writer and performer. He has devised the show specifically with the Ramsgate Tunnels in mind. Using vintage wartime footage, beats and “looping” Tom captures the voices of the audience and transforms them into the voices of people from the past, projected onto a wartime parachute.

Recreating the tension of the cold war period Gagarin is an immersive experience with original music composition by Thanet composer Nick De Carlo. Inspired by Yuri Gagarin’s first orbit of the earth the piece is accompanied by original films created by artist Helga Fannon. Helga’s work has recently been shown at the ICA in Celluloid Traces. The show affords the audience the chance to discover the lesser known story of the tunnels during the 1950s when it was earmarked as a nuclear shelter. The show will be relayed through a state of the art sound system enhancing the eerie sounds of space and cold war tensions.

The festival will also have three music stages. The  Italianate Greenhouse in King George VI Park will host an afternoon of  Jazz with Sabina Desir and the Doug Sides Trio on July 28 from 1pm.  Ramsgate’s up and coming musical stars will perform on the main Harbour Stage from 2pm and music at Harbour Hoo-Ha takes place from 7pm that evening.

Activities for children include The Enchanted Forest created by Bindlestick Theatre. This will run from Noon to 5pm.

The same day will have The Pirate Ship Adventure, a soft play area for young children by Hackney’s Albion Kids Show and presented on Ramsgate Main Sands from 11am to 4pm.

This year the Summer parade, funded by Ramsgate Town Council, will be made up of people from the community sending the message that Plastic is not fantastic!
Ramsgate Town Team is joining Arts in Ramsgate, Addington Street Community Group, Ramsgate Arts and local schools and groups to create things made of discarded plastic found around the town and beach. It could be a sea creature, a whale or even an outfit made out of bubble wrap!
There are free workshops at;
Newington Community Centre (Tuesdays, 5pm-6.30pm, running now up to and  including  July 24)
Glo Hub Brunswick Street (Wednesdays, 5pm-6.30pm running now up to and including July 26) for children aged 7-12

AiR Arts in Ramsgate Harbour Street is also holding workshops running now until July 21 on Thursday mornings, 10am-12pm and evenings 6pm-8pm or Saturdays, 1pm-4pm and Friday drop-ins from 10am to 5pm, open to everyone, children and adults!

There will also be an opportunity to pick up instructions and kits to make sea crabs and turtles at home and bring them along on the day!

Collect your packs from Arts in Ramsgate, make them at home and join the parade on the day.

Keep up to date with festival announcements by following the hashtag #RFOS across social media, or by visiting the website: http://ramsgatefestival.org/