Thanet Stage School and the Impromptu Ensemble at Thanet Vue.

Visitors to Vue Thanet were treated to a spectacular live performance of Swan Lake on 7 June, as local groups showcased their talents to mark the upcoming live screening of one of the most iconic ballets in history.

The Vue foyer was centre stage for the teaser performance from the Thanet Stage School and the Impromptu Ensemble.

The Royal Ballet’s adaptation of Swan Lake, originally composed by Tchaikovsky in 1876, will be screened live at Vue Thanet on 12 June, with the encore on Sunday 17 June.

Josephine Johnston, principal of Thanet Stage School, said: “It was a real honour to be invited by Vue to launch these new screenings and we completely were blown away by the positive reactions we’ve had from customers. You don’t generally get to see performances like ours in a setting like this one so we loved having the chance to show off our talents.” 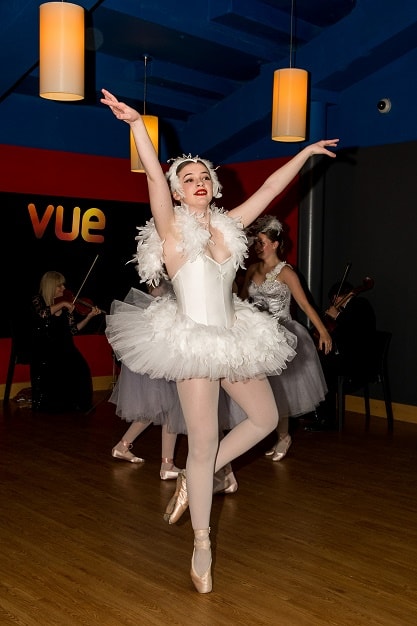 Ben Jones, The Impromptu Ensemble, said: “We really enjoyed playing for these talented young dancers, and could tell that all the passers-by who were at Vue to watch other films found it a real eye-opener. We hope they come back for the actual Swan Lake livestream screenings – great dancing and fantastic music, right in the middle of Westwood Cross!”

Andrew Mullen, General Manager at Vue Thanet, said: “Swan Lake is a truly timeless tale and this was a real celebration of both the exceptional influence Swan Lake has had on modern ballet as well as an opportunity to see the fantastic local talent we have here in Thanet. 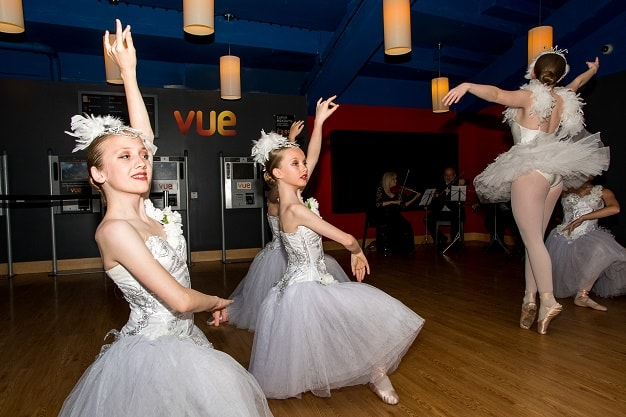 The Thanet Stage School and the Impromptu Ensemble did an absolutely marvellous job and have really given the Royal Ballet a run for their money. It’s certainly whet the appetites of our customers ahead of the screenings on 12 and 17 June.”

You can secure your tickets to Swan Lake and other Big Screen Events by going to: www.myvue.com

Civic Opening of the restored Shrine of St Augustine and the National Pugin Centre. 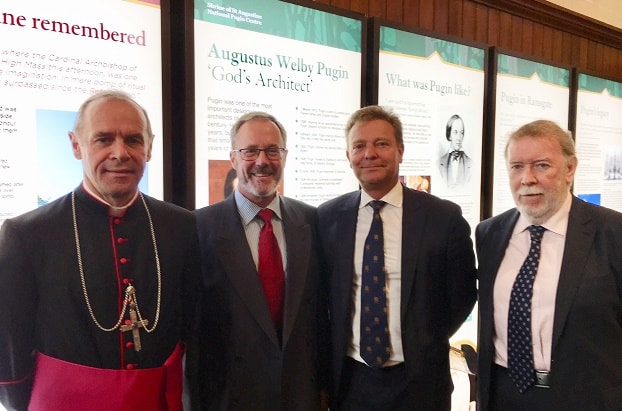 South Thanet’s Member of Parliament, Craig Mackinlay, has joined Rector of St Augustine’s in Ramsgate, Fr Marcus Holden, and a number of delegates including the great-great grandson of Augustus Pugin, for the Civic Opening of the restored Shrine of St Augustine and the National Pugin Centre.

The event took place on Friday 8 June and was followed by a reception in the Cartoon Room at The Grange.

Mr Mackinlay said: “It was an honour to be invited by Fr Marcus Holden to the the Civic Opening of the wonderfully restored Shrine of St Augustine and the impressive National Pugin Centre. 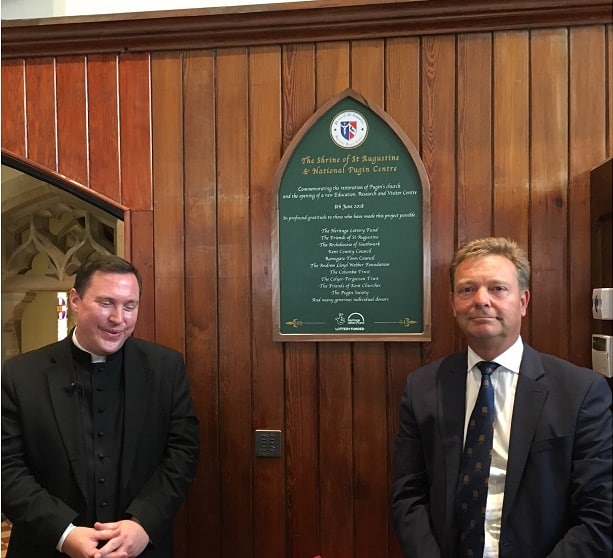 “The Civic opening represented the culmination of over seven years of hard work in raising funds, researching, writing proposals, sourcing materials, building and restoration to bring the shrine up to a standard that Augustus Pugin would have approved of. Pugin was the designer of the Palace of Westminster whose final resting place is at the shrine in Ramsgate.”

“The project involved skilled teams of researchers, craftsmen, historians, project management and many, many volunteers and I congratulate everyone involved in this magnificent project.

“I have no doubt that worshippers, pilgrims and general visitors who come to St Augustine’s to pray or simply enjoy will further appreciate the beauty of its architecture as a result of these works.” 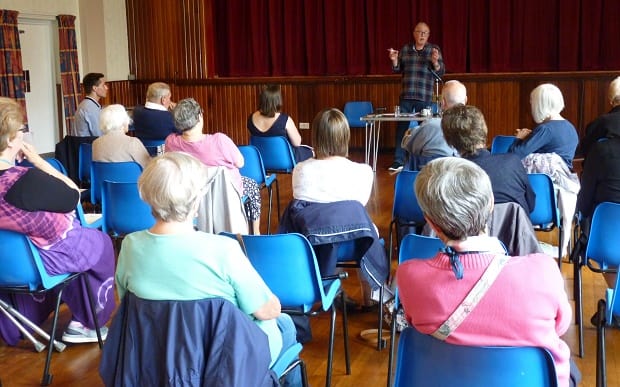 Meetings of the Thanet Over Fifties Forum (TOFFS) have been coming thick and fast in recent weeks, and no fewer than three top-quality guest speakers featured at the first ever TOFFS meeting to be held at the Centre, Birchington, on May 31.

Those speakers were: John Lean, from the South East Region of the National Pensioners Convention (NPC); Cllr Robert Wright of Birchington Parish Council, on the Birchington Neighbourhood Plan; and Rebecca Tinsley, Regional Cyber Protect and Prevent Officer, on the war on cyber-crime.

TOFFS co-ordinator Pauline Petitt said: “We had such a good audience who clearly got a lot from the meeting. People were engaging and gave a fabulous round of applause to the speakers at the end of the meeting.  People really went away feeling they had benefited from the information and advice they had received.”

John Lean, from the NPC, spoke on a variety of topics, including health and social care for the elderly.

He said: “The care system is broken.  Governments have made over five million pounds in cuts since 2010.  People are at risk of loneliness, depression and confinement: all conditions that impact on the NHS.  The Government’s solution to funding the crisis is for individuals to use the value of their homes or have private insurance to pay their bills.  This will not solve the problems.  How much worse can this become? …Hardly a day goes by when we don’t read some atrocity about where some poor person being ignored, isolated, even abused.”

On state pensions, John said: “It is not a State payment to people for nothing: we have contributed all our working lives. It is like a deferred income. Britain is a wealthy country: our pension should be at £200 a week at least.”

John explained that the NPC wants to see National Insurance payments taken out of the Treasury’s hands, and an

independent commission set up which is accountable to Parliament.  Any Government wishing to use the fund will be expected to lay before Parliament an in-depth report explaining how they plan to use the money.

Birchington Parish Councillor Robert Wright then shared his thoughts about the Birchington Neighbourhood Plan and how it fits in to the much-discussed Thanet Local Plan.

Cllr Wright said: “When the Thanet Local Plan was made public there was an outcry!

“But we found out that if you formulated a neighbourhood plan you could work towards the things you wanted for your community, and reduce the risk of a developer coming into Birchington and building identical houses without green open spaces [and for those who would like to submit their responses] the appraisal form is still available to complete via www.birchington-pc.gov.uk.”

Regional Cyber Protect and Prevent Officer, Rebecca Tinsley, who had made the journey  from Hertfordshire to address the Forum, explained that cyber-crime is on the increase: so much so, that it is considered the UK’s second highest threat (behind terrorism).

More people own a mobile phone than a toothbrush

80% of people in the UK are connected to the internet

Rebecca spoke about the importance of reporting any incident to Action Fraud on 0300 123 2040, helping the Police to conquer these crimes.

Rebecca provided resources for members to explore in the fight against cyber-crime and fraud.Financial Fraud Action UK (FFA UK) – have launched Take Five to Stop Fraud which urges people to stop and consider whether the situation is genuine: to stop and think if what they are being told really makes sense.

The Little Book of Cyberscams – is available online via and is downloadable via www.met.police.uk/globalassets/downloads/fraud/little-book-of-cyberscams.pdf

If you would like to find out more about any of the topics discussed above, or would like to become a member of the Thanet Over Fifties Forum (for free), simply contact Pauline Petitt at the Thanet Volunteer Bureau, via email: toffs@thanetvolunteerbureau.co.uk; or by phone: (01843) 609337.

TOFFS membership entitles you to six information-filled newsletters per year, including comprehensive notes from TOFFS meetings, so you need never miss out on what was discussed at them even if you can’t attend in person.