Three Thanet people are amongst the 1,057 who have received an award in the Queen’s Birthday Honours list.

Some 71% of awards in the list go to people who have undertaken outstanding work in or for their local community.

For Thanet those people are:

The volunteer coastal warden with Thanet Coast Project has been recognised for services to the community and Marine Environment, being made an MBE.

Willie is one of the original volunteer Coastal Wardens – a scheme was first set up in 2004 – but has gone on to become a superman in volunteering by dedicating and achieving so much for the local community for the marine environment of the North East Kent Marine Protected Area (NEKMPA: http://nekmpa.org.uk/).

Willie has dedicated huge amounts of time to carry out research and set up and lead volunteer projects on pioneering marine conservation work along the Thanet Coast. This work has been on Thanet council owned public foreshore in conjunction with Natural England and the Thanet Coast Project – leading on monitoring and control of marine non-native species.

Willie has always carried out his work in meticulous detail, dedication and humour…as many of his fellow volunteer colleagues will testify!

Willie (on the right hand side of the photo) is pictured with a small group of fellow Coastbusters. the nickname of the volunteers involved on the marine non-native species team. Although this image is in Broadstairs, the team is more regularly seen working along the intertidal chalk shore in Ramsgate. The ‘Coastbuster’ project has recently expanded for practical work around the north Kent coast within the HLF funded ‘Guardians of the Deep’ partnership project (led by the Kent Wildlife Trust).

‘Congratulations’ to Willie have been made by the NE Kent MPA Management Group and the NE Kent Scientific Coastal Advisory Group where progress of the project is reported; and from the Thanet Coast Project and Thanet council (one of the main coastal foreshore landowners) on behalf of the local community along the North East Kent coast and especially from all his volunteer and Coastbusters friends!

Marina Jeffrey-Watson, from Westgate,  Medallist of the Order of the British Empire (BEM)

Marina was recognised for her services to  the United Reformed Church and the community of Westgate. 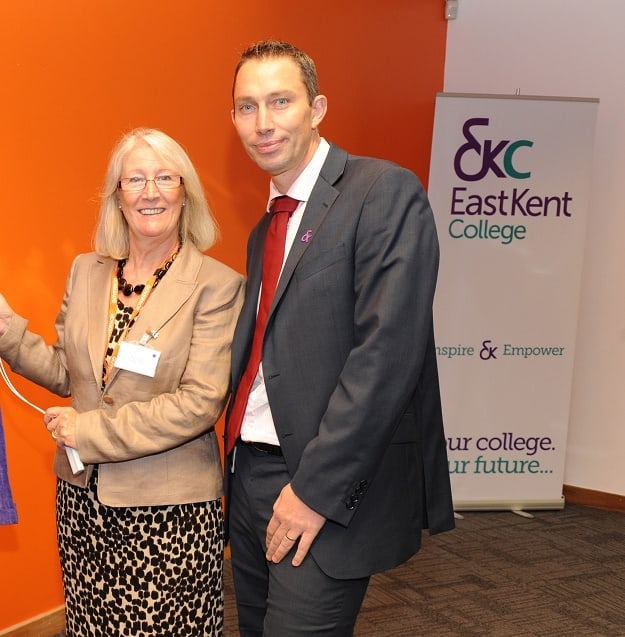 Beverley was recognised for her services to the community and further education.

Beverley first joined the college’s Governing body in 1990, remaining a member until 2012 when she became Chair. During her tenure as the Chair, she helped grow the educational opportunities the college gives, taking it from its single Broadstairs campus to a multi-site college which served the communities of Dover and Folkestone.

As Chair of the Governing Body, Beverley then helped to drive the transformation of the two campuses, which had been the two worst performing in the country when they were merged with East Kent College. Within just three years, the performance of the campuses was improved so much, the whole college achieved an Ofsted ‘Good’ grading.

She continued the work to grow the college when she became Chair of the Board which was overseeing the merger between Canterbury College and East Kent College, finally standing down as Chair and a Governor when the two had successfully become the EKC Group.

Beverley said: “It was a total shock to receive the letter about the honour. I was so amazed to have been put me forward. I have been involved with the college as a Governor in one guise or another for over 20 years, as well as being one of the college’s students. I have thoroughly enjoyed all of my work with the college, the Board and staff, as well as my involvement with our students. I’m proud to have helped the college evolve and develop into the formidable one that it is now, providing opportunities for young people across the whole of East Kent.

“Throughout my time as a Governor, it has given me great joy to see the transformative impact which education can have on people’s lives, and it is because of this that I have happily given my time and energy. I have gained as much as I have given, both personally and professionally and it has provided me with some incredible and inspirational experiences. It was a real privilege to lead the Board over the last few years and to see the merger with Canterbury College, and the creation of the new EKC Group, through to fruition.”

Graham Razey, Group Principal and Chief Executive of EKC Group, said: “Beverley’s commitment to enhancing the communities we serve was unwavering during her time as an East Kent College Governor. She presided over some major changes within the college, ensuring that a generation of young people have had the best technical and vocational education available. It’s fantastic to see her efforts rewarded with this honour.”

Beverley is also the current treasurer of the Margate Rotary Club and was also its President between 2014-15. She is also a Director of the Michael Yoakley charity in Margate, which runs the alms houses and a care home next to the QEQM hospital.