A licensing application hearing for a Beach Mania festival in Margate has been adjourned for the third time after Kent Police revealed that the predicted Spring tide would mean the entire event would be six inches under water.

The application is for a two-day music festival on Margate Main Sands over the August bank holiday weekend.

Events company Happy Days Parties want to use part of the main sands by the boating pool, which would be fenced off and contain a stage for live music and dance performances. There would also be recorded music.

The festival, which organisers say they have made a £27,000 investment in, would feature garage and house classics on the first day and carnival tunes, soul, Afrobeats, R&B and Soca on the second day.

Outlining their plans they say there will be performances from national and international DJs with an expected crowd of just under 2,000 people.

But during a committee meeting at Thanet council this morning (June 5) Kent Police licensing officer PC Justin Carter said a high tide of at least 4.6 metres would put the event under water on August 25.

He said: “During August 25 high tide is at 12.33pm and the expected Spring tide is the highest tide of the month. I have spoken to the coastguard and normal tide would go to the boating pool but a Spring tide is expected which will go right up to the promenade where the event is to take place, putting the whole event five or six inches under water.

“This is without taking into consideration on shore wind which could increase it by another metre.” 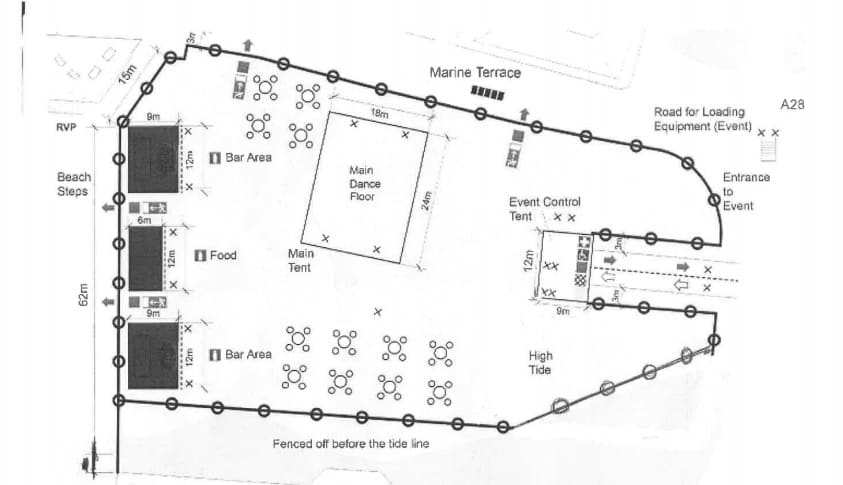 PC Carter added: “Kent Police is not trying to stop events, we want to encourage this in Margate but there are so many things wrong with this (application) and we have to put public safety first.”

Kent Police have a list of 28 other points in an objection to the event as it currently stands.

Suggested conditions  include no glass bottles, toughened glass/plastic containers for alcohol, at least 4 door supervisors with 2 being female, a Challenge 25 scheme in operation, a lockable drugs box to be on the site and the use of CCTV. The list of conditions also say those under 25 not to be allowed on the premises.

Ward councillor Iris Johnston also raised concerns. She said: “I had 13 notes from the last meeting and substantially more concerns raised by members of the public. It is the first time in nearly 24 years that I have objected to an event. I always do what I can to work with an applicant to get things right but with this one there are so many concerns.”
Cllr Johnston suggested moving the event to September would be safer and could also bring an extra trading day for local businesses.

Thanet council legal officer Paul Tapsell said: “ That the high tide could come up to the promenade is a significant factor impacting hugely on public safety and the whole operation of this event in this location. My view is that the council does not have sufficient information to make a fully informed decision.”

Happy Days organiser Rotimi Anibaba and representative Bobby Holder said they had not received any prior information regarding concerns over the high tide but had local professionals working on health and safety for the event.

Mr Holder said: “In regards to the new evidence it would have been nice if we had received it before. There’s no evidence and no paperwork. When things come up off the hoof it makes it difficult to address.”

Speaking after the meeting Mr Holder said significant investment was being made with a view to making the festival an annual event.

He added: “The event organiser lived in Broadstairs for four years and I live in Margate. We are using all local people for security, health and safety, food, beverages. Under the law there are 28 days for any objections to an application where we have an opportunity to then address them but I do not feel we have been given that opportunity here.”

Mr Holder said expert advice would be sought and festival timings could be moved to avoid the high tide.

An adjournment was agreed with the committee expected to hold another hearing within the next two to three weeks.