Broadstairs CC 1st XI continued their push for promotion at Park Avenue last Saturday, overcoming a strong Ashford side that belied their position at the foot of Kent League Division 2. Whilst the seasiders’ were at times below par, an excellent all-round performance by Matthew Frewin, ably supported by skipper Chris Kidd helped to secure their fifthh victory in 5 matches.

Winning the toss and electing to bat, the Broadstairs openers Chris Flint and Elliot Fox found conditions trickier to handle than in previous weeks; a combination of wily bowling from Ashford’s Woodger and Helm and a slow bowler-friendly pitch. By the 11th over and the score at 33, both Flint (8) and Fox (19) had been removed by Woodger and it would require the middle order to build a defendable total. 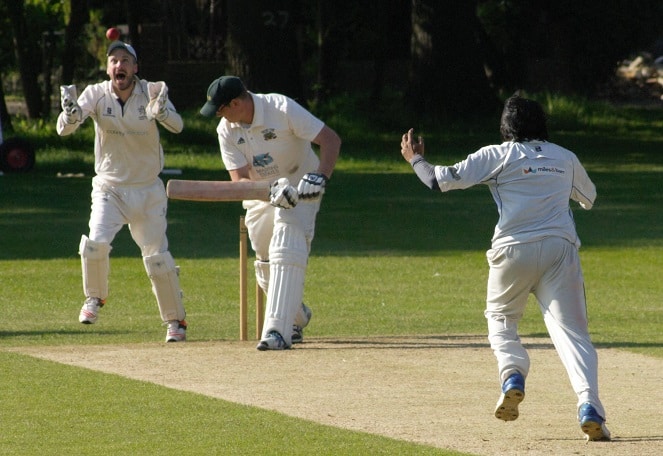 Jamie Dewell and Frewin took-up the challenge, picking-up the scoring rate, looking to hit boundaries as often as possible and riding their good fortune when rather straight-forward catches were spilled. Dewell was eventually caught behind off the bowling of Allon and with Frewin now joined at the crease by Swaroop Dasari, the score of 83-3 at drinks suggested that a large total was still possible. 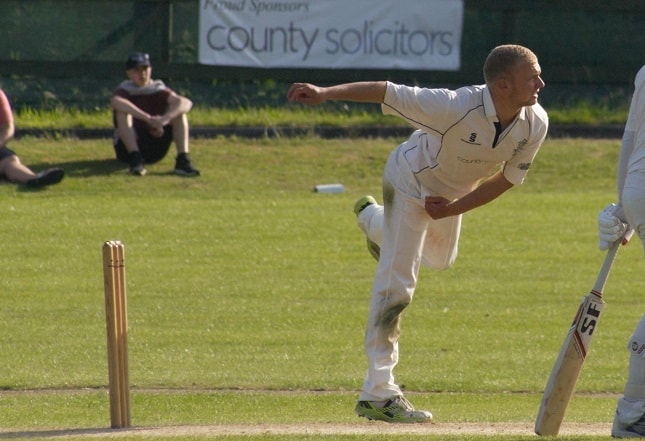 Fortune was to play its part again, however, when Dasari’s hefty straight drive ricocheted off the bowler Allon and landed on the stumps with Frewin backing-up and out of his ground. This freak dismissal of Frewin (34) brought to end an excellent innings, the young batsman looking in good form and at ease with the conditions. After a brief appearance at the crease by Jack Wheeler (7), skipper Kidd entered the fray and provided the backbone for productive final 20 overs with some measured hitting and enthusiastic running.

Dasari (17) fell in the 34th over, adjudged LBW whilst attempting a reverse sweep shot. His successor, Alfie Huntley, continued the run-scoring partnership with Kidd, the pair putting on a further 35 runs before Huntley (14) was caught behind. Luke Palmer (2) followed shortly after and just as Kidd was looking like completing his first half-century of the season, he too was dismissed, caught and bowled by Buckham for 46. The final few balls saw Callum Morgan (5*) and Masoud Rangin (3) bring the Broadstairs total up to 188 – a defendable score albeit somewhat short of what had been promised at drinks. 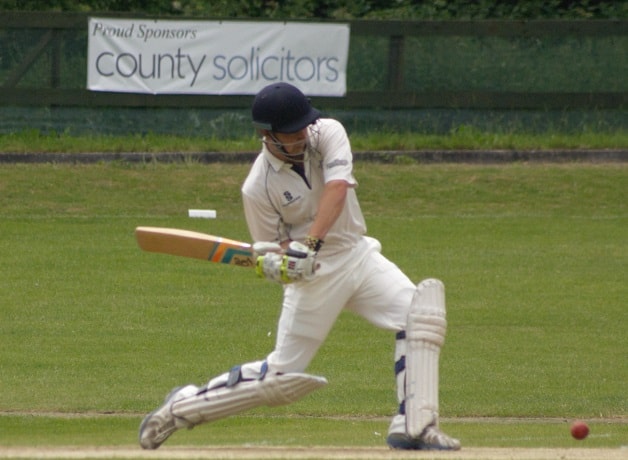 Ashford’s opening duo of Tegg and Allon got off to a shaky start with Tegg surviving a couple of lively LBW appeals, the bowling combination of Luke Palmer and Fox providing the controlled attack that has typified their season so far. It was Palmer who provided the early breakthrough, first dismissing Allon, caught behind by Flint and then bowling Harrison with the next ball of the over. Dewell and Rangin then Kidd took over bowling duties, Dewell giving little away and creating pressure at the other end. Kidd capitalised on this, trapping Tegg LBW in the 17th over with the score on 63. 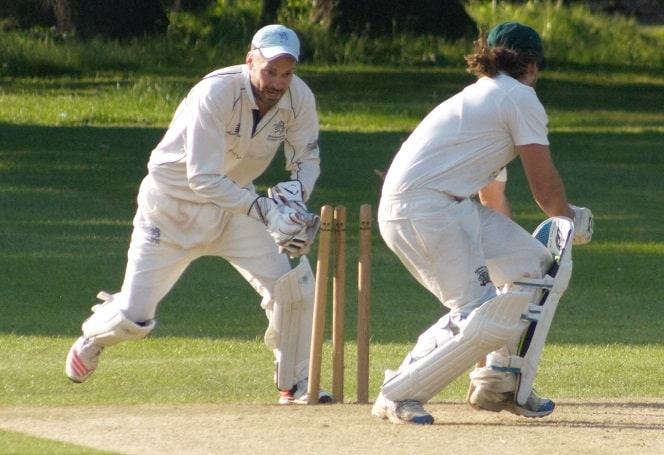 This was a crucial wicket with the batsman looking well-set after having been dropped earlier in the innings. At drinks, Ashford were 87-3, almost mirroring the 1st innings score at the same stage with Coles and Allon looking threatening. However, Dasari, removed Coles shortly after the break and the spin combination of Dasari, Kidd and Frewin put the brakes on the scoring. The required rate would start to creep-up over the subsequent 15 overs and eventually Ashford succumbed to the pressure with Frewin claiming the wicket of Richardson, caught by Fox in the deep.

This wicket precipitated a series of dismissals with Dasari bowling Allon and the tail cleaned-up by Frewin who finished with figures of 5-23 off 9.1 overs to complement his batting achievements of the day. Ashford finished on 156, in the end some distance away from the target set and testament to Broadstairs’ high quality bowling attack. 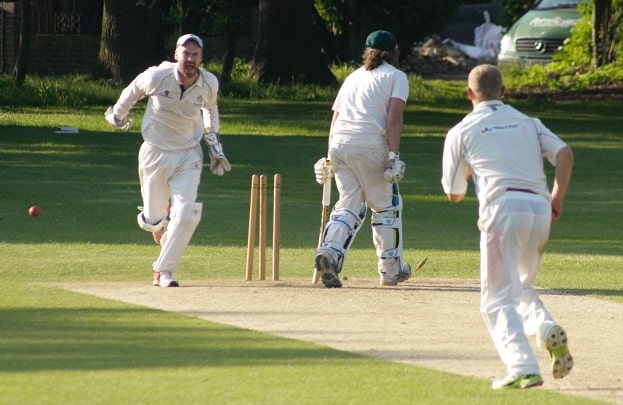 With Upchurch maintaining their 100% record, the win for Broadstairs places them in second spot in the division with a series of top-of-the table clashes to come over the next 3 weeks. The first of these is away to 3rd place Orpington and this will provide a stern test of their promotion potential.

Losing the toss, Broadstairs were asked to bat on a slightly damp and green wicket. Lewis Hewitt (8) and George Kidd (14) opening the batting on the back of their half centuries last week. Lewis started as he finished last week, hitting consecutive boundaries, the first lofted over cover and the second all along the ground through extra cover, but two balls later attempting another lusty blow, the ball held up and Lewis was through his shot too early, off stump being pegged back.

Archie Ralph Harding in at 3 was dismissed first ball caught behind. It looked like a good toss to win. Nathan Fox (12) joined George with the score on 11-2. With the wicket and conditions perfect for swing bowling, the 2 youngsters hung in there, playing and missing but not getting frustrated. They made good use of the odd bad ball and moved the score onto 46 when George was adjudged LBW. Harry Carter (71) then joined Fox and as we’ve seen a couple of times already this season, Carter doesn’t hold back. He was able to find the boundaries easier and help push the run rate along, his third, fourth and fifth scoring shots being 4,6,4. The 6 being a powerful flick of the wrists straight back over the bowlers head! It was then Fox who was adjudged LBW and Broadstairs were 67-4 at the half way stage.

James Bond’s last innings on this ground was 97* last season and he continued with some early boundaries. Bond (46) was the perfect partner for Carter, talking to him constantly, encouraging each other and with both able to hit the big shots the scoreboard kept ticking over. They frustrated the Blackheath bowlers, making them try something different and cashing in with boundaries and plenty of singles. Carter gave 2 catching opportunities but Blackheath failed to take them and they paid the price.

He was eventually out in the 46th over having made an excellent 71 and the stand with James being 112 and Broadstairs were sitting on 180. Blackheath have scored 200 most weeks so the tail did their best to get above this total. Andy Marshall (2) was run out, Tom Marshall (1) LBW but Oli Frewin stepped up and made an excellent 21* including a 6 back over the bowlers head. Bradley Ellison finished 3* and BCC had set Blackheath 209 to win.

Broadstairs started well, Archie and Brad sharing the new ball. Both were moving the ball around and unsettling the batsmen, it was Ellison who struck first in his fifth over, getting one to jump slightly at Olufawo who gloved through to Andy Marshall at first slip. 29-1 became 37-3 when Archie clean bowled the dangerous Barker and then Brad swung one back through the left handers gate and pegged middle stump back. Archie’s first spell finished (6-0-26-1) and Carter was brought into the action.

Broadstairs were hoping his extra pace would hurry the batsmen, but he couldn’t get a breakthrough until his sixth over, bowling Richley, Blackheath were 69-4. Carter finishing his first spell (6-1-20-1), Bradley Ellison was unable to get his third wicket and finished his spell (10-4-16-2).

The spinners were on, Oli Frewin and Ashley Ellison. Oli picking up his 11th wicket of the season, bowling Lyons (77-4) just before drinks. Both spinners bowled well but boundaries seemed a bit too easy for the batting side, 2 poor midfields turning 1’s into 4’s and BCC had let the game slip slightly. Ellison was unlucky not to have got Clarkson out just after his 50, a nick being held by Tom Marshall but the batsman oblivious to the woody noise stood his ground.

George Kidd replaced Oli and in his third over Clarkson ran down the track, misread the spin and Tom Marshall did the honours whipping the bails off. 164-6 after 40 overs and BCC needed wickets. Carter and Archie were brought back into the attack to finish their spells. Both bowled better than their first spell, Archie taking an excellent return catch with his first ball of his second spell (179-7). Harry was unlucky in his four remaining overs, beating the edge and missing the stumps by inches, his remaining 4 overs conceding just 9 runs (10-1-29-1).

Oli Frewin back into the attack and into action straight away, bowling McCann, Archie then inducing and rash shot from the number 10, Andy Marshall calling for the sky high catch and taking it well. With 2 overs remaining Blackheath required a run a ball. Oli found the bit of magic required and bowled Montgomery and finish with figures of 3-43 from 8.2 overs. Archie 9-0-37-3, Ashley 7-1-32-0, George 4-0-34-1.

It was an excellent game, played in good spirits and with some great little individual performances, however this weeks MoM has to be Harry Carter for his 71 and 1-29. But special mentions to James Bond for his 46 and important stand with Harry, Oli Frewin for his 21* and 3-43.

This win means we are top of Division 2, although only 12 points ahead of second from bottom Gore Court. We welcome Orpington next week, they maybe bottom of the table but they can’t be underestimated. Our hunt for promotion goes on.