A Thanet district councillor has defended a tweet that says she “can’t waite (sic)” for a council officer to “pass away.”

Cllr Suzanne Brimm, who has now removed the post, made the comment in reference to Thanet’s director of operational services Gavin Waite. The council is now seeking legal advice on the matter.

In the tweet Cllr Brimm said: “Can’t Waite (sic) for certain others at TDC to pass away, their ignorance of the electorate is astounding….just saying! Bring on the thought police!” 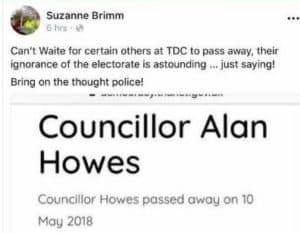 It was posted above a photo of Birchington councillor Alan Howes who died on May 9. Cllr Brimm is currently at Cllr Howes’ funeral in London.

Cllr Brimm said Cllr Howes collapsed and died just days after a showdown at a council meeting which was adjourned amid a row between him and then-chairman Janet Falcon.

Cllr Brimm, who is due to face trial in September accused of destroying information related to a dog DNA scheme, added: “The council has made me ill, they are harassing me and sending police to my door. I think they made Alan ill.”

The comment was screen grabbed and posted to social media by Robert Bird, who branded it “shameless.” In response Cllr Brimm tweeted: “Officers behaviour of certain elected members is appalling.”

TDC Chief Executive Madeline Homer said: “We think this is shocking and appalling behaviour from a member of this council and are seeking legal advice on the matter.”

Previously Cllr Brimm, who held a Cabinet post as a UKIP member before quitting the group to become Independent last August, was subject to an investigation after posting comments that a senior Thanet council officer “…needs to go!! Not fit for purpose!”

Cllr Brimm was asked to remove the comments but refused.

Following the complaint an investigation, costing £3245, was carried out. An independent investigator found that Cllr Brimm’s facebook post compromised the integrity of an officer and she had brought her office and the council into disrepute.

Thanet councillors voted to reprimand her at a meeting in February – although that vote was not unanimous.